Yes. Marc Levine, the chief of gastrointestinal radiology at the Hospital of the University of Pennsylvania, has found that a... 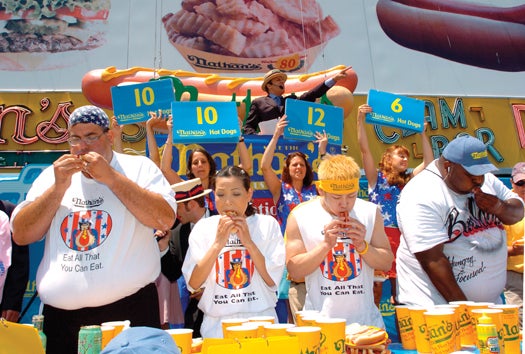 Yes. Marc Levine, the chief of gastrointestinal radiology at the Hospital of the University of Pennsylvania, has found that a competitive eater’s stomach works more like an expanding balloon than a squeezing sac.

The competitive eater displayed almost no peristalsis. The regular guy stopped eating after just seven dogs—his stomach was full. The pro, however, was still going strong. After 10 minutes and 36 hot dogs, Levine asked him to stop. The pro’s stomach had stretched to the point that it took up most of his upper abdomen, and still there wasn’t much peristalsis.

By regularly forcing his body to consume past the point of fullness, Levine says, the pro’s stomach had adapted to expand. He never felt full, and by never feeling full his stomach showed very little muscle contraction. Experts still don’t understand this phenomenon.

Ask Us Anything
food
March 2012