When Disaster Strikes, This Bike Generator Will Give Me Power [Video]

Pedaling consistently churned out about 150 watts. 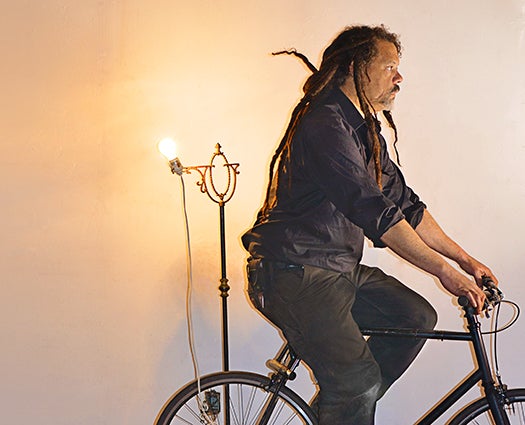 Copper wire ties modern civilization together, but it is fragile thread. In 2012, Hurricane Sandy bathed miles of the electrical conductor in saltwater, severing my Brooklyn neighborhood from the grid. Lower Manhattan—a dense concentration of wealth, power, and wiring—fell into darkness for days.

Events like Sandy used to be called 100-year storms. By the end of this century, East Coasters may call them “autumn.” To prepare for the next disaster, I built a simple, robust generator able to power essentials like a refrigerator, chargers, and lights indefinitely.

Gas and diesel generators are common backup sources of electricity, but disasters can easily disrupt fuel distribution networks, as Sandy did. I decided that the best power source would be me: I’m always around, and my fuel is readily available. I just needed a means to turn calories into kilowatts.

Bikes efficiently convert muscle energy into rotary motion, which can rapidly spin a generator. Fun, useful fact: Every motor is a generator. Spin the shaft and it produces electricity. I extracted a motor from a trashed mobility scooter and then built a pipe stand to brace my bike’s rear wheel against the motor’s shaft. Next, I wired the motor to a homemade charging circuit (to regulate output) and connected that to a deep-cycle battery. A common inverter then turned the battery’s 12 DC volts into 120 AC volts.

Pedaling consistently churned out about 150 watts, which is plenty to power a few incandescent lightbulbs. Three to five minutes of hardcore riding stored enough energy in the battery to fully charge my cell phone (with juice to spare). Someday soon, after the next disaster strikes, I will be a power baron: Drudges will sweat bullets to charge their phones on my bike, leaving a surplus for me to squander on high-res cat videos and ice-cold beverages.

WARNING: Lead-acid batteries can ignite, explode, and cause chemical burns if used improperly.