The Strange Beauty Of Bioluminescent Fish

The new book Fire in the Sea brings one eccentric marine biologist's paintings out of obscurity. “The hovering squid were wary but death yawned in slow motion. Non-frightening. The opening disclosed not a blacker hole of hell but something more of a jewel box with rays of yellow radiating through a circled fence of ivory posts, laying flat the brilliant spokes of a halo on the ocean floor,” wrote Compton. The deep-water angler uses its esca, or lure, which feature a pair of lobes that can be almost tentacle-like in appearance.

David McKee, a retired biology professor from Texas A&M University, never got the chance to talk to Henry Compton about his art. Compton, an eccentric marine biologist and local fishing pier manager, passed away the week the two men were supposed to meet. After Compton’s death, two cardboard boxes of his belongings ended up in the garage of his sister-in-law, Helen Compton, where they sat for about six months until she gave McKee a call—Helen had organized the unsuccessful meeting, and knew of McKee’s interest in Compton’s art.

Those cardboard boxes contained paintings, slides, and texts about bioluminescent fish, which became the focus of McKee’s new book, Fire in the Sea.

“My first impression was ‘wow,'” McKee says. “I was already familiar with Compton, and I was thinking, ‘here we go again.'” 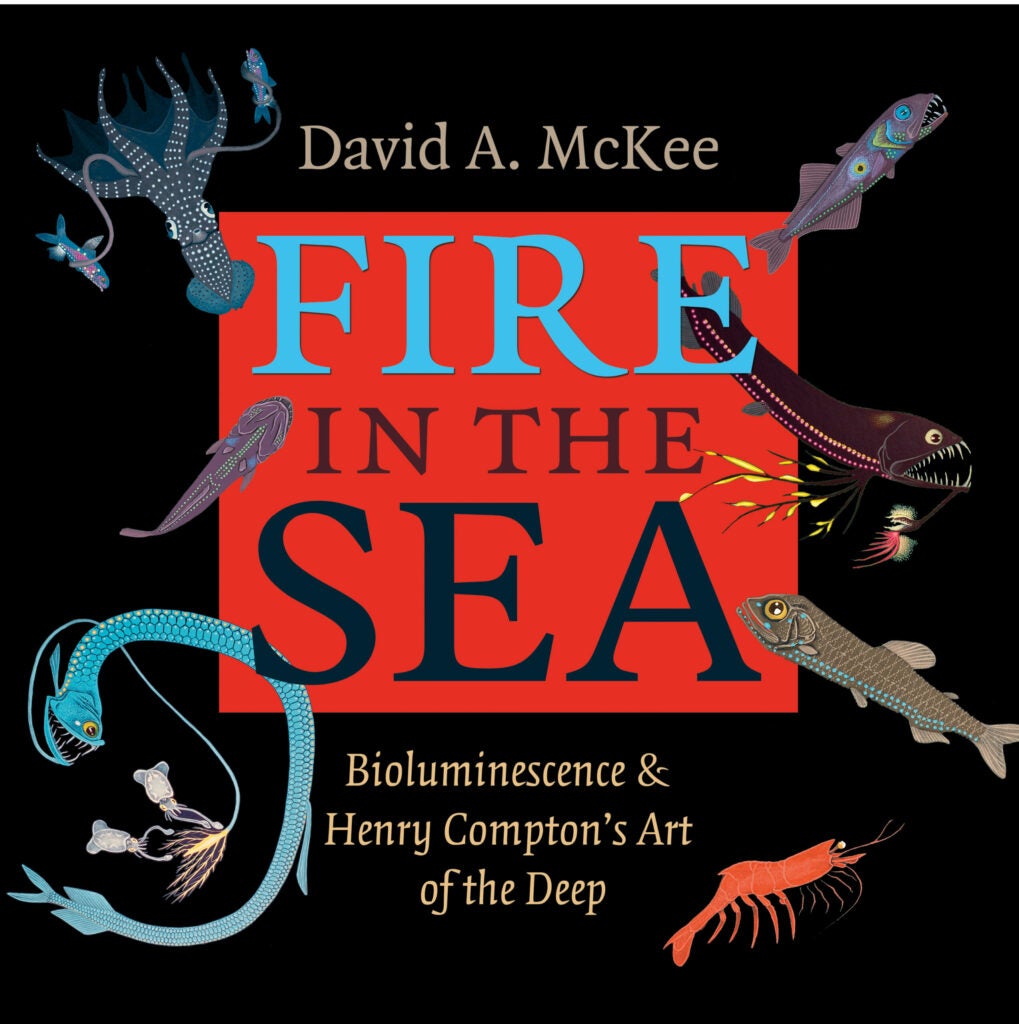 In his earlier years, Compton worked for the Texas Parks and Wildlife Department, where he went on some of the first Gulf of Mexico cruises to collect deep sea life from Texas waters. From there, Compton would photograph the specimens, and then paint them into life-like environments. He wrote taxonomical descriptions as well as fanciful and strange narratives to accompany each painting.

“Back in the 1960s, we knew very little about what was in the Gulf of Mexico down at that depth, about a mile below the surface,” McKee says. “In addition to the mythical types of stories he tells about the fish, there’s the science story, about early deep sea research that was going on.”

These paintings and texts eventually ended up in the two boxes that made their way to McKee. Though Compton was a self-taught artist, and perhaps never realized his own artistic talent as such, McKee saw his careful preservation and organization of the art and texts as a clue that he hoped one day to publish the collection.

“I feel like I’ve given birth, here,” Mckee says. “Hank Compton was a borderline genius, and a termendous artist.”

The book, which will be released on Wednesday, includes 59 of these paintings as well as the taxonomy, narratives, and background on the deep sea environment and Compton himself. You can see a sample of these below. The round, flat batfish is primarily found in the western Atlantic ocean and the Gulf of Mexico. “Batfish are about as reliable in sustained swim as a scallop is; however, they can make two jumps and a gobble from prone position faster than a Sidewinder Rattlesnake can strike second time,” Compton wrote. This shark species, shown at right with a squid in its jaws, is rarely found outside of the benthic zone. “Neither squid nor shark desired outside help and interference,” Compton wrote in his narrative. “Swimming inside the aquarium of black air. He lit his own way. Silver-white from his 8-foot length and 4-foot sides lit patrons in the balconies and boxes. Red beams from the knife of his belly lit screaming faces below. Everybody wanted to touch him. He was whimsical with his saucer eyes,” Compton wrote. Members of this genus, Argyropelecus, are found at depths between 100 meters and 1,000 meters. This species has an extremely long—six to 11 times the length of the head—chin barbel, which is tipped with a bulb and filaments that produce light. “The night belonged to him. The light belonged to him. He hung it from a long whip from his chin. Squid and red shrimps and foolish fish came to see in the golden glow of his chandelier the promise of dining,” Compton wrote. “They saw nothing below. Their vision was in two great hemispheres above—a sky gridded of forms and motion. The yellow luminosity of their eyes enhanced the clearness of their sight. They saw as in a crystal,” Compton wrote. This species has a narrow body and brushlike teeth. The most notable feature—the eyes—are made of light-sensitive tissue and bony membranes.

“The hovering squid were wary but death yawned in slow motion. Non-frightening. The opening disclosed not a blacker hole of hell but something more of a jewel box with rays of yellow radiating through a circled fence of ivory posts, laying flat the brilliant spokes of a halo on the ocean floor,” wrote Compton. The deep-water angler uses its esca, or lure, which feature a pair of lobes that can be almost tentacle-like in appearance. This species borrows characteristics from both octopods and squid, but has some strange differences. It has retractile sensory filaments, produces bioluminescent mucus instead of ink, and lacks the ability to dramatically change color, instead flashing lights to disorient attackers. “Her dark graveyard cloak was spread by the 8 tentacled arms bearing rows of puny suckers and sticky fingers at the ready. All of her lights were out. Like a hoopskirt in waltz, she spun in a slow gavotte, dipping and swaying to the perfumed eddies of the deep,” Compton wrote. Unlike other families of sea cucumbers, this sea pig has enlarged tube feet, which allow for legged locomotion. They tend to live in large groups on the abyssal plain. “The cuke, Scotoplanes, comes from no plowed field. Instead he plows his own […] his mouth is always jammed of mud shoveled in, whirled in, twirled in, licked in by his stumpy cauliflower tentacles to embrace this nutrient dirt and absorb from it the bacteria, amoebas, yeasts, whip-tailed flour-size animals and worms who form the living cement of the deep-sea oozes,” Compton wrote.
Animals
Biology
Fish
Wildlife
North America