‘Mafia’ Cuckoos Rule By Fear, Foisting Young On Other Birds 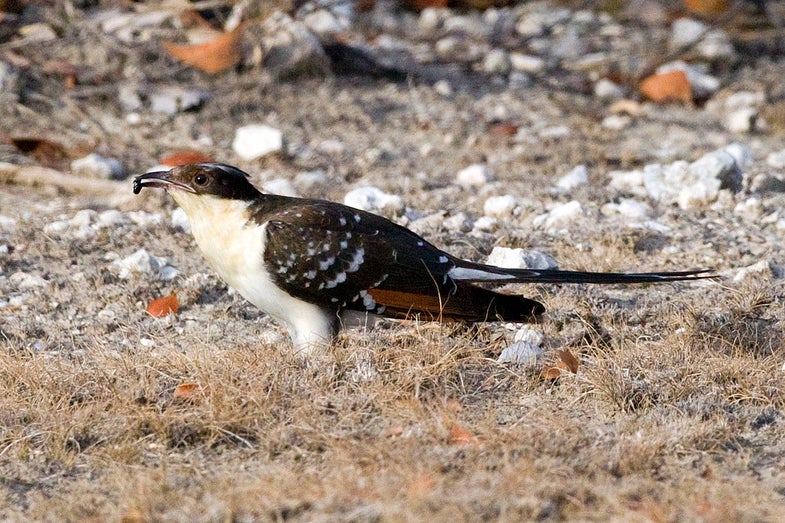 Great spotted cuckoos lay their eggs in other birds’ nests, and the host does all the work of raising the impostor. But if the new foster parent doesn’t cooperate and ditch the new arrival, the the cuckoo sometimes retaliates, destroying the poor birds’ other eggs. Brown-headed cowbirds behave similarly. Whaddaya gonna do about it?

Scientists have puzzled over this behavior. This retaliation doesn’t at first appear to improve the chance of the cuckoo reproducing, and is slightly risky in that it could lead to a confrontation. One theory to explain it is that the cuckoos are acting like “the mafia,” as described in a study published in Scientific Reports–if the host birds fear retaliation, they may raise the cuckoo because it’s better than having all their eggs broken. The same reasoning explains why a shopkeep might unwillingly pay for protection from the mafia, for fear of being roughed up.

In the new study, researchers mathematically modeled the cuckoo-retaliation and the “mafia” hypothesis, and found that this theory does appear to explain the behavior, as long as two conditions are met: that the cuckoos visit the same nest repeatedly, and that the host birds are capable of learning. The cuckoo makes an offer that can’t be refused, as it were.

The cuckoo makes an offer that can’t be refused.

“We tested and confirmed the mafia hypothesis, which was controversial among scientists,” said study lead author Maria Abou Chakra, a researcher at the Max Planck Institute for Evolutionary Biology, in a statement.

But the parasites don’t always get their way. According to the new model, the interaction between parasite and host is cyclical. Cuckoos do not all exhibit this mafia-like behavior. When non-mafia behavior predominates, hosts who only conditionally-accept cuckoo eggs (after their other eggs are destroyed) are evolutionarily favored. As the researchers wrote:

And so it goes, the circle of life. But darker than the Lion King version.

Another recent study published in Science suggested a different reason why hosts sometimes seem to accept cuckoo eggs: The young impostors excrete a smelly substance that protects hosts from predators.