How bird brains thrived during a mass extinction

The skull of an extinct relative hints it lacked key features of modern bird brains. 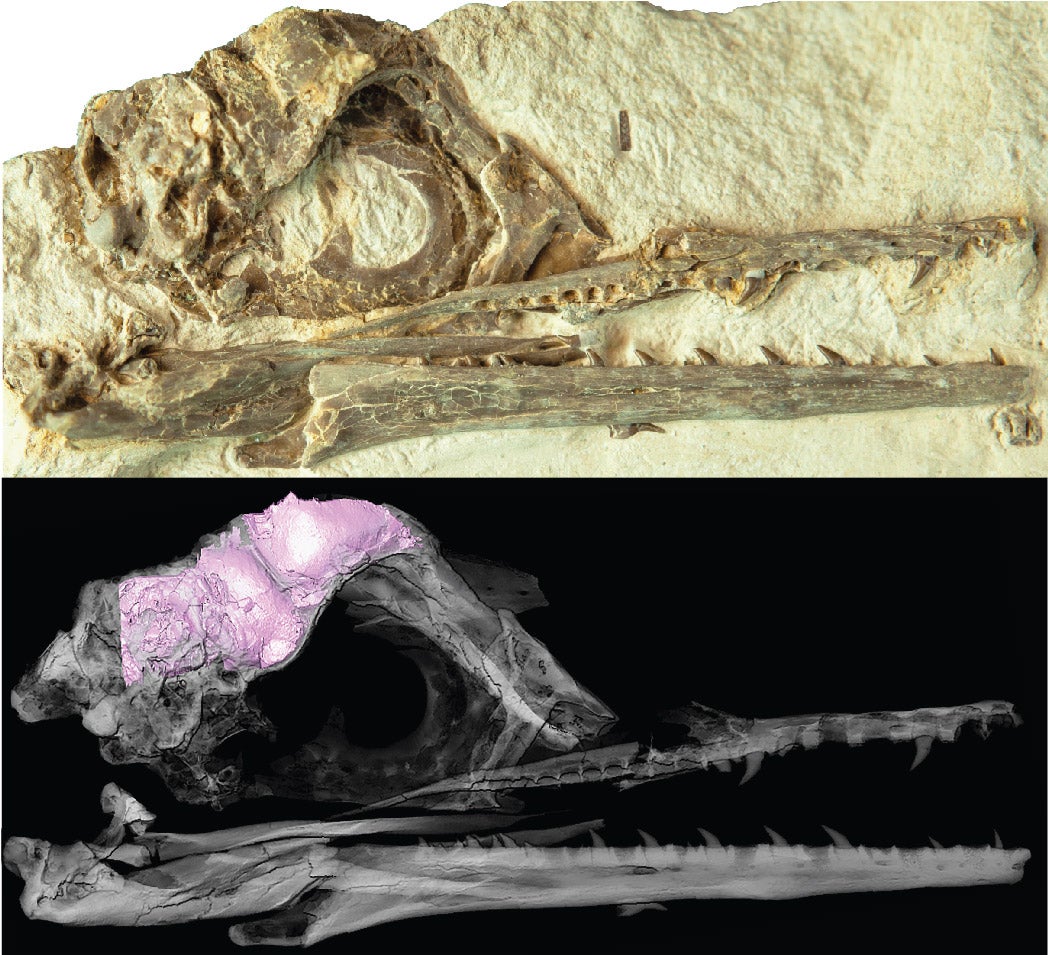 When an asteroid more than six miles wide smashed into Mexico’s Yucatán Peninsula 66 million years ago, some ancient birds survived the catastrophe, and scientists have proposed several ideas about which traits might have given them an edge. C. R. Torres (Ohio University)
SHARE

A remarkably preserved skull from a small, gull-like creature called Ichthyornis may shed light on how the ancestors of modern birds weathered the mass extinction that killed off all the other dinosaurs.

Scientists compared the Ichthyornisin skull to those of dozens of living birds. They found that this close relative of today’s birds nonetheless had a brain whose shape was distinctly different. The findings indicate that the expanded forebrains found among living birds helped them adapt to a rapidly changing world, the researchers reported on July 30 in Science Advances.

“A unique brain shape, specifically a really large cerebral hemisphere, was a major factor in why living birds were able to survive when no other dinosaurs could,” says Christopher Torres, a paleontologist at Ohio University in Athens and coauthor of the findings.

When an asteroid more than six miles wide smashed into Mexico’s Yucatán Peninsula 66 million years ago, it triggered tsunamis and wildfire and kicked up a blanket of dust that circled the planet and blocked the sun’s light, causing plants to die and dramatically altering Earth’s climate. Yet some ancient birds survived the catastrophe, and scientists have proposed several ideas about which traits might have given them an edge.

One possibility is that these birds were smaller, and thus more adaptable, than their neighbors. “How much food an organism needs to eat, how it can travel, where in the world it can live, what latitude it can live at, all of these traits are linked to body size,” Torres says.

Or perhaps the answer lies in the toothless beaks seen in today’s birds, which could dine on a range of foods, from flesh to seeds.

Present-day birds also have very complex brains. “They’re incredibly smart creatures, and so it’s been proposed that some aspect of the brain and what the brain can do may have contributed to that unique survivorship,” Torres says.

Unfortunately, though, very little is known about the brains of early birds. As a group, they are relatively small and have fragile bones. The process of fossilization is “unimaginably brutal,” Torres notes, and the few skulls that withstand it tend to wind up flattened and difficult to decipher.

But Archaeopteryx, the earliest recognized bird which lived 150 million years ago, is an exception. Scientists have been able to determine that its forebrain was proportionately much smaller than those of living birds.

The 70-million-year-old Ichthyornis skull Torres and his colleagues examined may fill in some of the gaps between Archaeopteryx and living birds. Ichthyornis was a pigeon-sized seabird with a toothed beak that dwelled in present-day North America. It’s also one of the closest-known relatives of living birds. This means Ichthyornis can help researchers narrow down which traits were truly unique to the bird lineages that survived the asteroid’s aftermath.

Torres and his team used CT scans of the nearly complete skull, originally discovered several years ago by collectors in Kansas, to digitally reconstruct the general shape of Ichthyornis’s brain. The researchers then compared this brain to similar analyses of Archaeopteryx, several more distantly-related dinosaurs, and dozens of living birds including flamingoes, woodpeckers, penguins, ostriches, and robins.

In living birds the cerebrum, a part of the forebrain made up of a left and right cerebral hemisphere, is very large relative to the rest of the brain. This region is where higher cognition occurs, including the processing of sensory information, memory, and more.

To accommodate its impressive size, the cerebrum is also positioned differently in birds compared with other reptiles such as snakes and crocodiles. Modern birds have a cerebrum that sits atop, rather than directly in front of, the midbrain.

Torres and his colleagues found that Ichthyornis, despite its evolutionary proximity to living birds, had a brain that was much more similar to that of Archaeopteryx. Its cerebrum was still fairly small and its brain had an overall more linear shape. The bulky cerebrum, the results suggest, didn’t become really pronounced until the modern birds emerged.

It’s not clear precisely what advantages these expanded forebrains gave these birds, Torres says. However, as conditions deteriorated in the wake of the asteroid, he says, “their ability to process those changes and react accordingly, and quickly enough, could have made all the difference when it came to surviving this mass extinction event.”

That said, brain size probably wasn’t the only reason that the ancestors of today’s birds survived. Their small bodies, beaks, and other traits may have also contributed, Torres says. The researchers did attempt to estimate the impact of body size by analyzing measurements from more than 2,000 extinct and living species. However, they felt they didn’t have enough information on the body sizes of other birds that lived at that time to properly determine if size played a role in survival.

Additionally, he cautions, the researchers could only draw upon data from the skulls of two ancient bird species.

“We still don’t know what the brain looked like in most early birds,” Torres says. He hopes that more well-preserved fossils like that of Ichthyornis will be unearthed in the future. “That’s really going to help us fine tune this picture and better understand what it is that made living birds so special.”

As a next step, the researchers will examine living birds to understand how much the cerebrum varies among members of the same species. This in turn will help determine how well the few available Ichthyornis and Archaeopteryx skulls actually represent these long-gone birds.