The discovery offers new hope for the beloved animal. 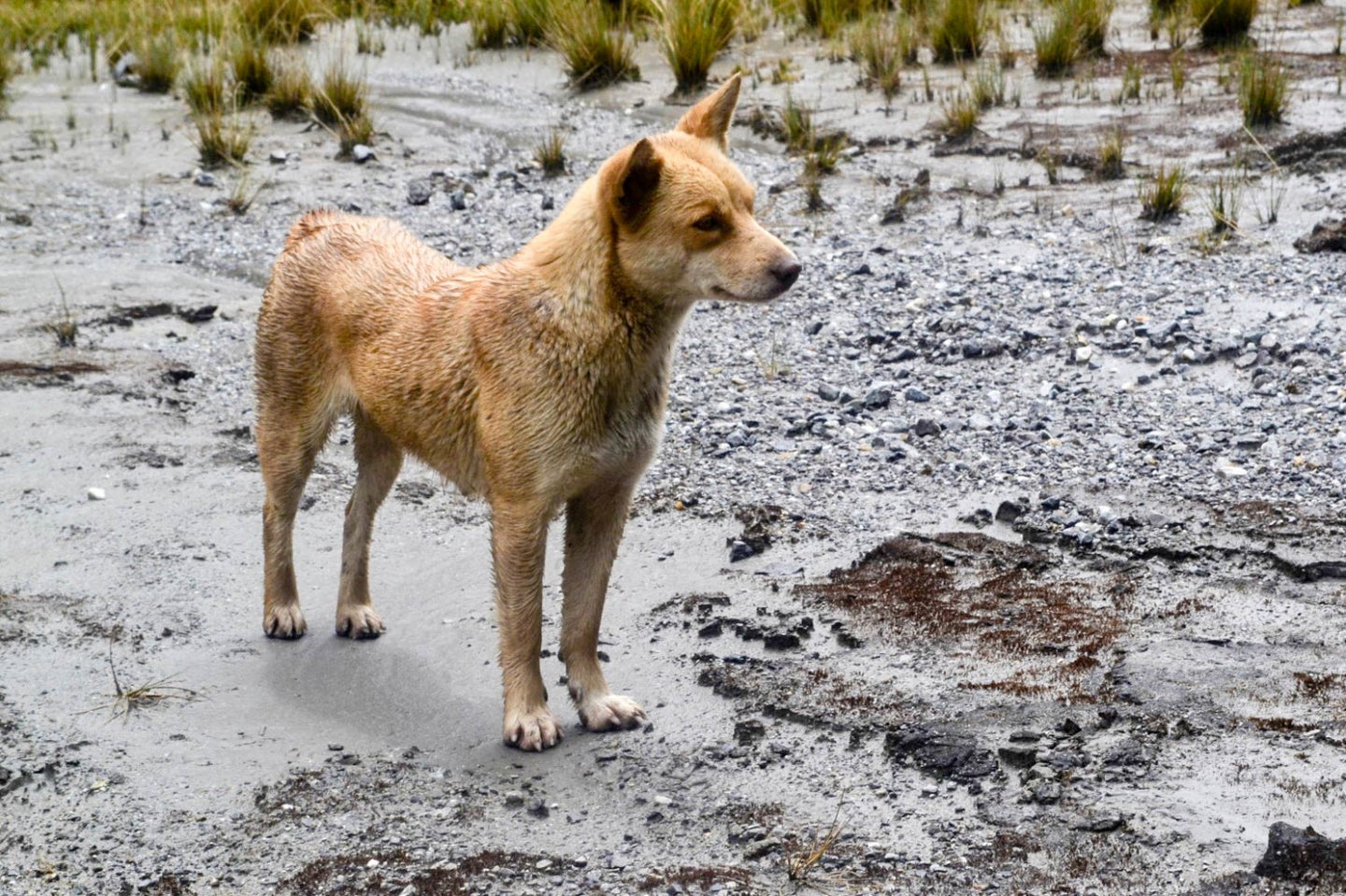 When zoology field researcher James McIntyre saw fresh dog prints stomped into the mud of the cool, rainy landscape of Papua New Guinea in 2016, he squealed like a small child. The elusive wild dogs of the Pacific island hadn’t been captured since the 1980s, and the only proof that they were still around was in one photo captured by an adventure guide in 2012.

“They are one of the very few remnant populations of wild dogs on the planet,” he says.

McIntyre, now founder and president of the New Guinea Highland Wild Dog Foundation, took an interest in the mysterious dogs back in the 1990s while studying intersex pigs in Papua New Guinea. While traveling in the area for research, he could hear the howls of the creatures but never met eye-to-eye with one. Still, for years, he would try to get back to the island to prove that the creatures he heard, the rare New Guinea Singing Dog, were more than just a hyped-up novelty breed.

Just how special a New Guinea singing dog really is has been a scientific debate since they first made their way to the Taronga zoo in Australia in the 1950s. Two little pups found in New Guinea with unique features and adorably fluffy tails quickly caught the eyes of zoos across the world, and the wee creatures were soon popping up in Berlin, New York, and San Diego.

Looking at the 30-pound rascals at first glance, there’s no clear sign they are anything wildly different than the breeds of dog curled up on our couches at home. But their howls are unlike anything you’ve probably ever heard before (they don’t have vocal cords, but can make melodic tunes), and they exhibit behavior, like reclusiveness and monogamy, that is hardly common in your average mutt.

After years of buzz on the zoo market, one German scientist finally got his hands on a skull of a deceased singing dog, and determined that these pups were little more than the village dogs that roamed around the remote island, says Lehr Brisbin, a senior research ecologist emeritus at the University of Georgia, longtime wild dog researcher, and McIntyre’s mentor. The singing dogs were demoted from the likes of a tiger to more of that of a house cat.

“From a scientific point of view, a lot of the glory went out,” Brisbin says.

Since then, classification of the dogs has bounced between a separate species, Canis hallstromi named for the then-director of the Taronga Zoo, and just another breed of domesticated dog (also known as Canis familiaris) that just had some serious quirks.

Either way, the singing dogs that we have in North American zoos today descend from just eight individuals. Many stem back from those original two puppies from the 1950s, with the very limited introduction of fresh genes in 1987 from a few rare wild-caught animals, Brisbin says.

As you can imagine, the 200 or so dogs still posted up in today’s zoos coming from such a limited gene pool has started to take its toll on the population—a lot of inbreeding can cause smaller litters and a reduced lifespan. And until recently, there’s been little hope of ever finding proof of their survival in the wild in current times and hope for conservation.

However, new research published last week in PNAS authored by McIntyre shows the highland wild dogs that McIntyre first encountered in 2016 have remarkably similar DNA to the “singing dogs” found in zoos across the US. As compared to thousands of other samples of canine creatures, ranging from 170 known breeds and village dogs, the only other close cousin to the creatures is the Australian dingo.

“[These dogs are] legitimately something that lives and thrives today in the wild that has a genetic composition that isn’t even remotely close to any dog on the planet right now,” McIntyre says.

Geneticists, including those at the NIH, broke down 150,000 genetic markers across the animal’s genome, and found that between a captive singing dog and a wild highland dog, there was over 70 percent overlap. The mystery of the 28 percent difference could be due to original lack of diversity in the few captures that were found all those years ago, or possibly a small bit of interbreeding with the locals.

“First and foremost [these findings] told us that these highland wild dogs had a really strong relationship with dogs kept in conservation centers in the US,” says Heidi Parker, a scientist in the cancer genetics branch of the NIH focusing on dog genomics who also authored the study. Not only that, but there’s a strong sign of an early evolutionary split between the dogs we know today and this branch that contains dingoes and the New Guinea dogs.

Plus, the wild dogs get the benefit of truly being recognized as wild. They don’t have to be considered run-of-the-mill village dogs anymore. The scrappy animals that have for possibly thousands of years survived in the mucky jungle of Papua New Guinea finally get the stamp of distinction, and true wildness, that make them worthy of conservation and protection.

“Just in time, we have proven that this is an evolutionarily important species that do live, right now, in Papua New Guinea,” McIntyre says.