The new specimen is also a never before seen species and genus. 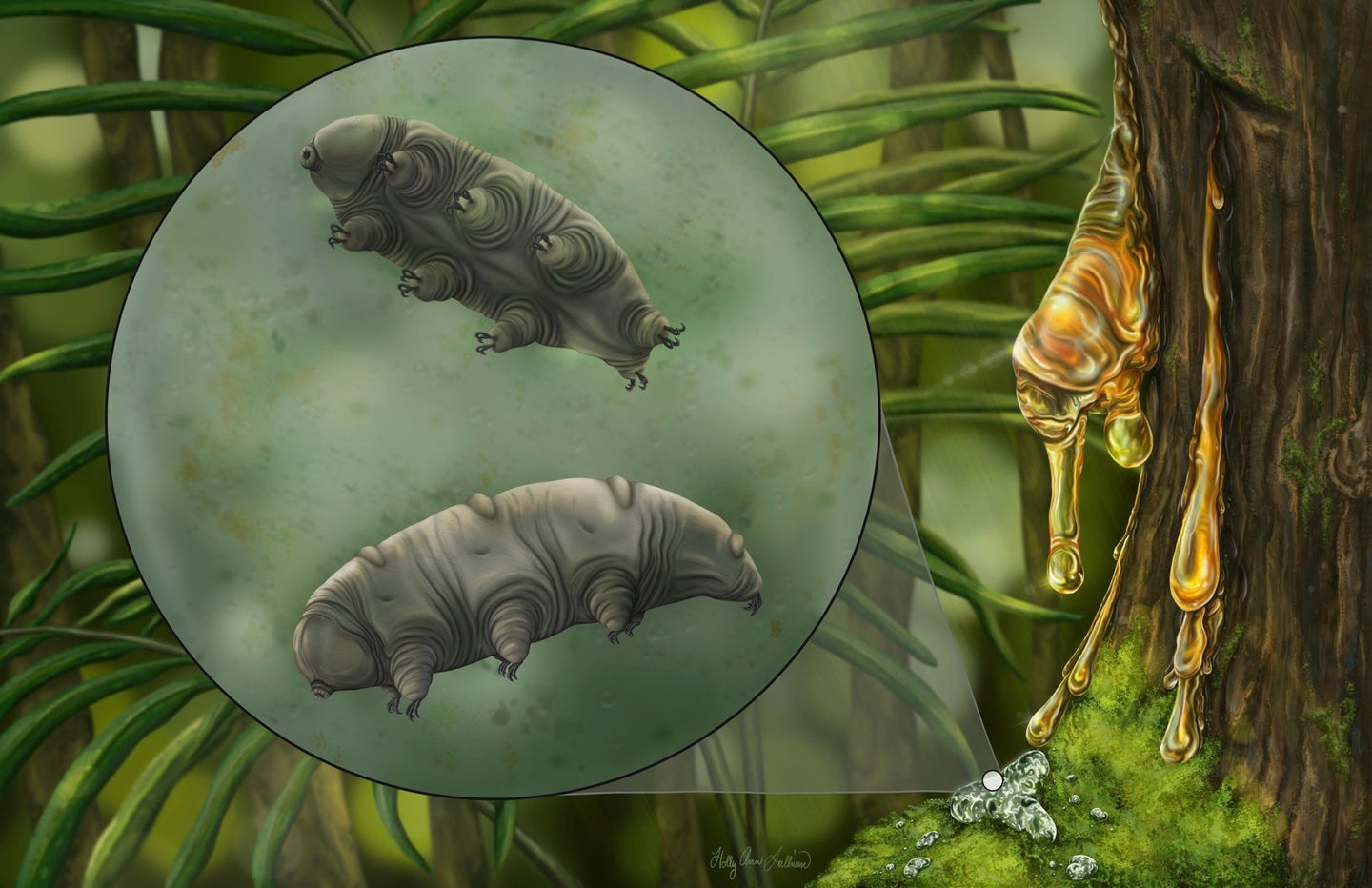 Tardigrades, when alive, are extremely resilient and hard to kill, but they don’t show up in the fossil record very often.
SHARE

The third ever tardigrade fossil has been found encased in Dominican amber. Zoologists say that the new fossil also represents a never-before seen genus and species.

The new tardigrade fossil, Paradoryphoribius chronocaribbeus, dates back to the Miocene, about 16 million years ago. The only other two full known tardigrade fossils, Milnesium swolenskyi and Beorn leggi, date back to 92 and 78 million years ago respectively. Though tardigrades, when alive, are extremely resilient and hard to kill, they don’t show up in the fossil record very often. Their extremely small size and lack of hard tissues mean they don’t fossilize easily—and when they do, they are very difficult to spot. Researchers documented their P. chronocaribbeus find in Proceedings of the Royal Society B.

Finding this new tardigrade was extremely lucky—the researchers had collected amber fossils in the hopes of finding insects such as ants and termites. “They’d had the amber for months, but they’d only been looking at ants,” first author Marc Mapalo, an organismic and evolutionary biologist at Harvard University, told Live Science. It’s only when a lab member spotted the tiny (0.02 inches, or 0.6 millimeters, long) body lodged alongside a few ants, a beetle, and a flower, that the team turned their attention away from the bugs. “It was more luck that they saw it … because it’s not something they look for,” Mapalo added.

P. chronocaribbeus is remarkably well preserved, and the intact chitin in its body meant that the team could use microscopy to peer into the creature’s body—something that’s never been done before with a tardigrade fossil. In addition to the tardigrade’s exterior and claws, which has been all that’s visible on the past two tardigrade fossils, Mapalo and his team could see into the animal’s foregut, which ended up being the crucial bit of info needed to peg this specimen as a new species and genus.

Peering inside a tardigrade’s body is a rare opportunity, but an important one to catch small distinctions between species. “If you look at the external morphology of tardigrades, you might assume that there are no changes that occurred within the body of tardigrades,” Mapalo said in a statement. But visualizing P. chronocaribbeus’s insides “helps us understand what changes in the body occurred across millions of years. Furthermore, this suggests that even if tardigrades may be the same externally, some changes are occurring internally.”

Despite such a limited number of available tardigrade fossils, zoologists know that they have a deep origin during the Cambrian Explosion more than 500 million years ago, senior author and Harvard University biologist Javier Ortega-Hernández said in the same statement. If more people joined the effort to specifically look for tardigrade fossils, that could help evolutionary biologists better understand their deep and long standing evolutionary history.

[Related: What you need to know about the tardigrade cannon]

“What is so remarkable is that tardigrades are a ubiquitous ancient lineage that has seen it all on Earth, from the fall of the dinosaurs to the rise of terrestrial colonization of plants,” Phil Barden, senior author of the study and assistant professor of biology at New Jersey Institute of Technology, said in a statement. “Yet, they are like a ghost lineage for paleontologists with almost no fossil record. Finding any tardigrade fossil remains is an exciting moment where we can empirically see their progression through Earth history.”