Songbirds near the equator really are hotter, color-wise

An analysis on feathered specimens supports the long-debated idea that tropical species look splashier than the rest. 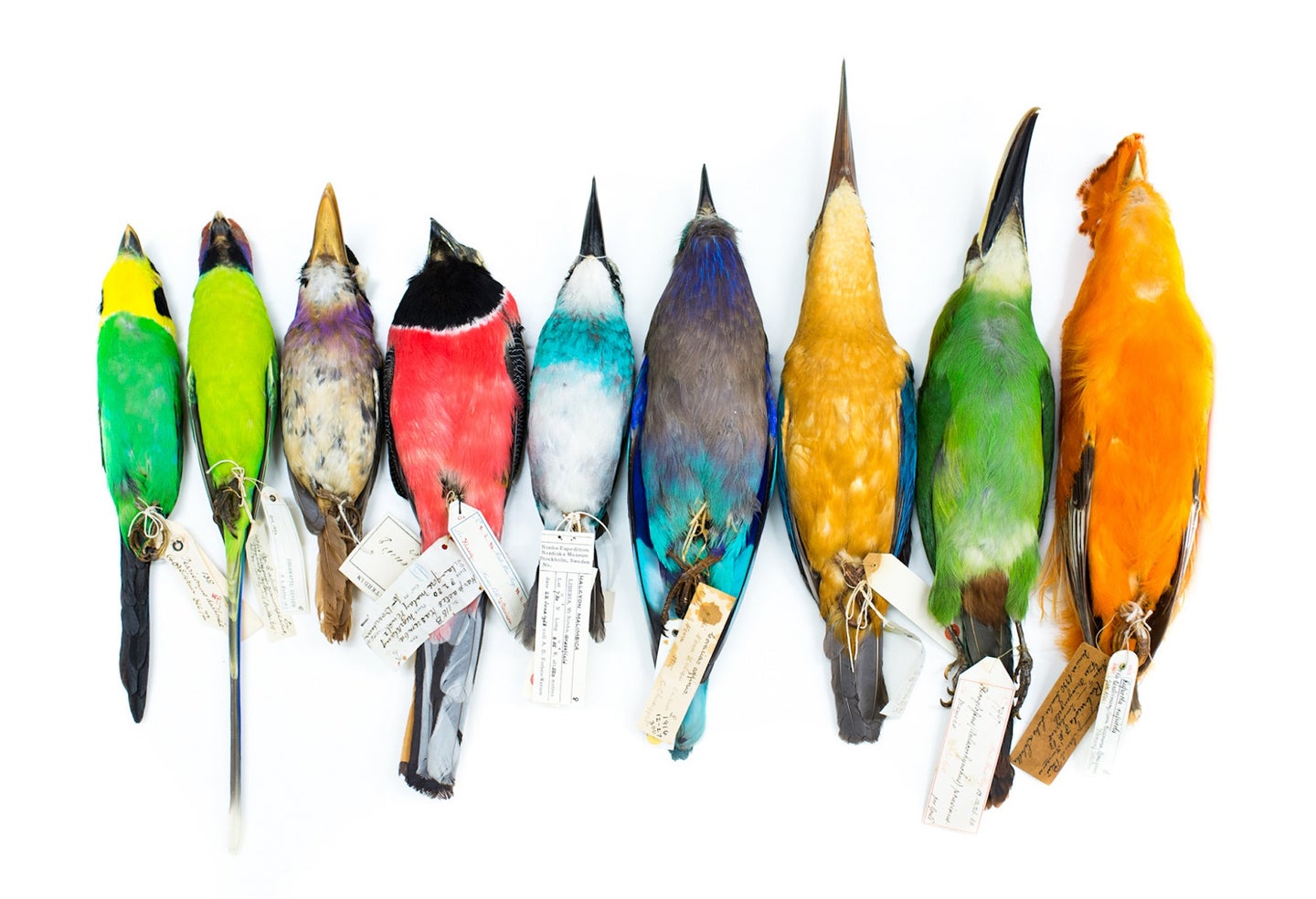 The study covered tanagers and other dazzling male and female songbirds housed in the Natural History Museum at Tring. University of Sheffield/NHM Tring
SHARE

While writing of their 19th-century voyages to document the world’s biodiversity, European naturalists like Charles Darwin and Alfred Russel Wallace were struck by the appearance of the plants and animals they encountered in the tropics.

“The new organisms that they were observing were, to their eyes at least, incredibly rich and varied in color,” says Christopher Cooney, an evolutionary biologist at the University of Sheffield in England.

Their remarks sparked the controversial notion among scientists that animals and plants living near the equator are more colorful than those found at higher latitudes. But a new report by Cooney and his colleagues demonstrates that, for songbirds at least, this pattern holds true.

[Related: Hummingbirds can see colors we can’t even imagine]

The researchers scrutinized 4,500-plus species from around the world and found that adult birds that bred in the area between the Tropic of Cancer and the Tropic of Capricorn boasted a more impressive diversity of colors than those native to other regions. The findings hint at several climactic and social pressures that might underlie the trend, the team reported on April 4 in the journal Nature Ecology & Evolution.

“They did a great job of really capturing the breadth of what’s going on across the globe … and showing convincingly that this age-old idea is well-supported,” says Eliot Miller, an ornithologist at Cornell University who wasn’t involved in the research.

The color gradient that Darwin and his peers proposed has remained “shrouded in uncertainty,” Cooney says, for several reasons. Most prior studies have focused on limited geographic regions and used subjective measures of colorfulness, he and his collaborators wrote in the new paper.

To address the question of how coloration changes with latitude, the team analyzed 4,527 species of passerines—which make up about 60 percent of known avian species and are often referred to as songbirds or perching birds—found in every habitat from the poles to the tropics. The researchers photographed the plumage of male and female specimens from the Natural History Museum at Tring at three different angles in visible light and in ultraviolet light that’s visible to birds. They then used computer algorithms to identify the pigments captured at 1,500 points on each body. “We wanted to generate estimates of colorfulness that are meaningful to the birds themselves,” Cooney says.

Miller points out that the inclusion of UV makes the analysis more complete. “They can do a better job of describing what birds can see in that way rather than just what we see,” he says.

From there, Cooney and his team measured the number of distinct hues in each individual’s feathers, and concluded that male and female birds near the equator were indeed on average more colorful than their temperate cousins. They estimated that colorfulness increased by roughly 20 to 30 percent from the polar regions towards the tropics.

The most colorful species the researchers examined was the paradise tanager, a small Amazonian songbird whose plumage is a riot of intense blues, greens, reds, and black. Next to the tanager, many high-latitude birds were “uniformly drab,” Cooney says.

“There are exceptions to the general trend,” he adds. “It isn’t a hard-and-fast rule that there aren’t colorful birds outside the tropics.” The US has a number of colorful birds, including the painted bunting and American redstart.

The kinds of habitats where these colorful birds dwell might shed light on why they developed their vivid displays. Cooney and his colleagues observed that specimens tended to be more colorful in warm, wet environments and dark, enclosed forests. “Those conditions do occur outside of tropical regions and potentially explain why places like the Eastern US … do have very colorful species as well,” Cooney says.

Birds in heavily forested areas might require bright, flashy plumage to catch the attention of other members of their species in the dimly lit understory. What’s more, food is typically more abundant in moist, lush places like tropical rainforests than it is in the tundra and other harsh landscapes. “There’s just more energy available in those environments that organisms can potentially invest in traits that are showy,” Cooney says. It’s also possible that some species acquire the eye-popping pigments in their feathers from fruits and nectars that are more readily available in the tropics than at higher latitudes.

[Related: Can birds smell? This ornithologist is debunking a long-standing myth.]

The researchers further noticed that colorfulness seemed to correlate with the songbird diversity in a habitat. Species in more crowded patches might have evolved to be brighter so potential mates and rivals could differentiate them from their neighbors, Cooney says.

Still, he emphasizes, additional studies are needed to explore the patterns he and his team documented. “There’s a huge amount more to be learned about the precise ecological and evolutionary forces that promote colorfulness,” Cooney says.

Another open question is whether songbirds are just one example of how life is more colorful in the tropics. “[Early naturalists] were talking about not just birds but other things like plants and insects and fish,” Cooney says. “It remains to be seen whether this is a general phenomenon that applies to all types of organisms, but I would suspect that it does.”