Scientists in the field disagree about whether this represents an entirely new species, but it's exciting no matter what. 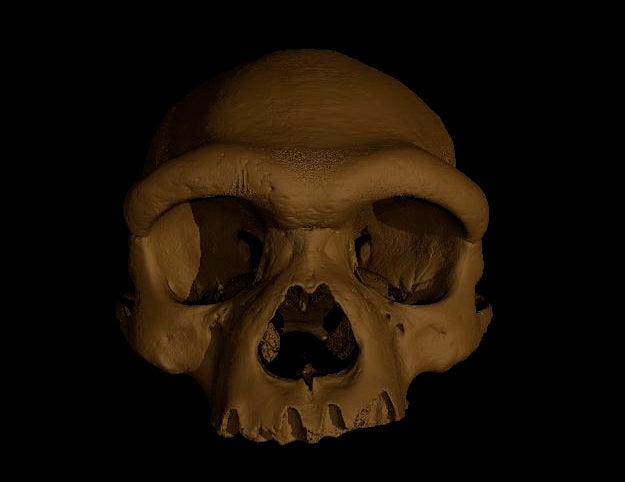 The Harbin cranium is neatly complete, except for missing teeth and an absent lower jaw. The skull was found decades ago, but only recently described by scientists. [Still from video]. Xijun Ni
SHARE

For more than 80 years, Chris Stringer says a nearly intact, ancient human skull sat at the bottom of a well in Harbin City, Heilongjiang Province, China. As the story goes, the specimen was originally unearthed from the bed of the Songhua River by workers building a bridge in Japanese-occupied northeastern China in 1933. The crew foreman recognized the skull’s value and didn’t want it falling into the hands of the Japanese occupiers, so he stowed the Harbin cranium away.

“He wrapped it up, and he put it down an abandoned well. And then about 80 years later, as he was dying, he told his grandchildren the story of how he got the skull. They went to look, and it was still down there. So incredible,” says Stringer, a paleoanthropologist studying human origins at the Natural History Museum in London. After more than an estimated 146,000 years buried in sediment and its additional decades in hiding, the Harbin cranium finally made it into researchers’ hands in 2018.

Now, three years later, the first scientific descriptions of the skull, dubbed the “Dragon Man,” were published on Friday in The Innovation, a new journal funded by the Chinese Academy of Sciences, in a series of three papers. Stringer joined the research team in 2019 and is an author on two of the three papers. “The cranium is a fantastically preserved specimen,” he says. “I think it’s one of the most important finds of the last 50 years.” The publication of these studies occurred on the same day as publication of similarly seismic findings based on partial skull specimens found in Israel.

[Related: Controversial study claims Botswana may be the origin of modern humanity]

In the studies, Stringer and his colleagues date the skull to a minimum age of 146,000, placing it in the Middle Pleistocene period. The researchers also declare the specimen representative of a new species on the tree of human evolution, which spans from our first bipedal primate progenitors up to modern humans today. They name this proposed species Homo longi, derived from the Mandarin word for dragon, after the skull’s geographic origin in Heilongjiang, whose name means Black Dragon River. The researchers propose that H. longi may be a more closely related lineage to present-day humans than Neanderthals, the widely accepted “sister group” of our species.

To determine the skull’s age, the scientists analyzed ratios of chemical isotopes found in tiny deposits of sediment trapped in its nasal cavity and also looked at the ratios of uranium isotopes, which decay in a predictable pattern over time, in the bone itself. To place the specimen in evolutionary history, the researchers measured the Harbin cranium’s external physical features like the size of the brain case, facial dimensions and angles, and the single intact molar tooth. They then took those measurements and compared them to 95 other previously studied specimens, including other skull and bone fragments found in China. Using a computer model, Stringer and colleagues reconstructed a possible phylogenetic tree (a diagram representing evolutionary relationships through time).

[Related: A primer on the primal origins of humans]

“It’s a weird combination of features,” says Stringer. The skull has a distinctive combination of primitive features, like a pronounced brow ridge and broad face, and those associated with more modern humans, like finer cheekbones. Above everything else though, what he says sets the Harbin cranium apart is its enormity, “It’s massive in size. It’s the biggest fossil human skull I’ve ever seen.” 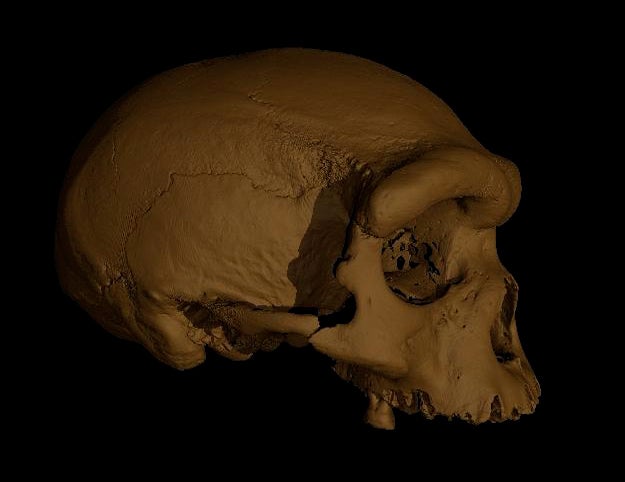 The Harbin skull is massive, with a brain case suggesting a brain size close to modern humans. But the pronounced brow ridge suggests relatedness to more primitive archaic human lineages. [Still from video]

But bigger brain volume doesn’t necessarily mean closer to modern humans.  And the conclusions presented in the new articles aren’t settled, even among the study authors. “I think calling it a different species [from Neanderthal and Homo sapien] is legitimate, but there are different opinions in the research team about what the name of this species should be,” says Stringer, who prefers to group the newly described Harbin specimen with a previously found skull known as Homo daliensis or Dali Man. The Dali Man skull has some differences from the Harbin finding, but Stringer considers that level of difference to be an acceptable amount of variation within a species. “From my point of view, [Homo daliensis] would take priority over Homo longi.”

The classification and placement of the Harbin cranium as a new human lineage is additionally controversial among scientists unaffiliated with the new research as well.

“We need to have DNA before we really know where this fossil fits in,” says Shara Bailey, a paleoanthropologist at New York University specializing in early human specimens from the same time period as the Harbin skull. Bailey describes our knowledge of the Middle Pleistocene as “the muddle in the middle,” pointing out that lots of remains aren’t well preserved and provide mixed signals. She says the Harbin skull is “an exciting finding, because how often do we get a skull as complete as this?” but is skeptical of the new research’s conclusions. “Their divergence analysis should be taken with a grain of salt.”

Bailey believes the newly described cranium “could be the face of a Denisovan, which is what we’ve been looking for.” Denisovans are an extinct lineage of archaic humans believed to have lived throughout Asia between 50,000 and 300,000 years ago. Our understanding of Denisovans comes largely from DNA analysis of partial bone fragments, including the Xiahe mandible, which researchers say the Harbin skull shares many similarities to. “It’s exciting in its own right,” says Bailey “because it could be the first time we have the face of this enigmatic human group”

Like Neanderthals, Denisovans overlapped and interbred with modern humans, leaving bits of their DNA detectable in populations of present-day people. A small percentage of Neanderthal DNA is common in people of both European and Asian ancestry, while Denisovan DNA is common in Aboriginal Australians, Papuans, and people of Asian ancestry, particularly Melanasians, Bailey explains.

That the Harbin skull represents an intact Denisovan specimen is, “the best hypothesis,” says John Hawks, a paleoanthropologist and professor of anthropology at the University of Wisconsin-Madison. Hawks doesn’t rule out other possibilities, though, and points out that there are limits to the usefulness of comparing a jawbone like the Xiahe mandible with this skull, which is missing its lower jaw. But he says the similarities between the two specimens are significant. “They both are lacking their third molders. They both have very big second molars. There’s things that are similar. And so I think it’s a good hypothesis that these are Denisovans.”

If the Harbin skull is a Denisovan, Hawks points out that the researcher’s thorough analysis of the cranium’s physical traits doesn’t match the DNA record. The researchers place the skull as more similar to modern humans than Neanderthals, based on their analysis. While Denisovan DNA has placed the group as sharing a most recent common ancestor with Neanderthals, more distantly diverged from modern humans. Hawks and Bailey would believe the DNA over the trait analysis, as traits can diverge, emerge, and shift in non-linear ways, whereas DNA tells a more complete story. An alternate possibility, according to Stringer, is that all three groups diverged simultaneously due to geographic isolation. Their relation to each other may not be easily defined by the standard phylogenetic tree. “In reality, you might actually have something close to a three-way split.”

Stringer acknowledges the possibility that he and his fellow researchers have found a Denisovan, and not a new species, in the Dragon Man. “These are not highly resolved issues,” he says. “I certainly don’t have 100 percent confidence that this is definitely a sister species of Homo sapiens. We’re going to be looking for more data, so this is only the first stage of the research.” Stringer hopes to soon examine the skull’s internal features, like the inner ear bones, to get a better sense of how the specimen relates to both Neanderthals and modern humans. And he says his colleagues are looking into the possibility of extracting genetic material from the skull for DNA analysis.

Ultimately, the lineage name and placement that the Harbin skull represents are small details, says Strigner. “Species names, for me, are labels that enable us to group things together, but they’re not absolute. They’re humanly created categories, and nature does not always play along with our neat concepts.”

In a way, Bailey agrees. “Whether it’s a distinct species or not really depends on how you view species.” She points out that, in much of biology, a species is defined by reproductive isolation—yet we know modern humans interbred with earlier lineages. And, whatever you call it, the lineage the Harbin cranium represents did not “evolve” into the Homo sapiens presently living in Asia, says Bailey. This finding doesn’t change that our ancestors are African.

Even with limited interbreeding between past lineages, all present-day people have much more in common with each other, genetically and physically, than with any extinct group. All visible differences between humans living across the world today are a much more recent development than the divergence of these archaic human lineages, says Bailey. “We are a lot more like each other than we aren’t.”