Forget husky haunches, these critters flip the script by getting their power from up top. 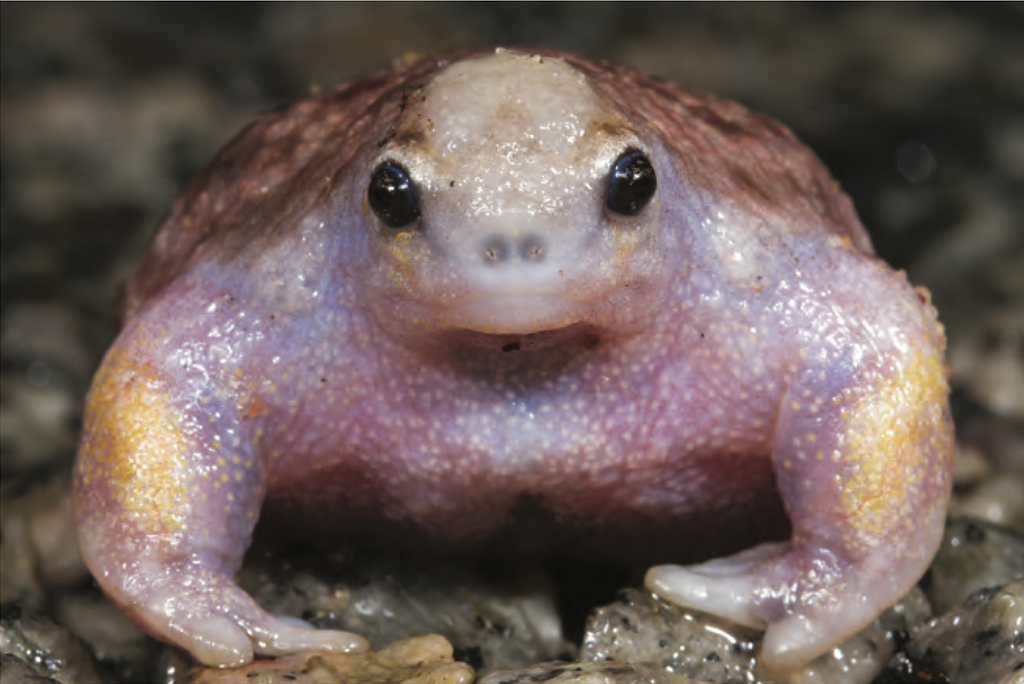 This turtle-looking frog, called the Myobatrachus gouldii, has big, strong arms for burrowing in the sand. Stephen Zozaya
SHARE

Things aren’t always as they seem, especially in nature. For the perfect example, check out the world of front-burrowing frogs. When you first spy the pillow-y shape of a Myobatrachus gouldii or the stocky arms of a Hemisus perreti, you might not think of how much muscle is packed in there. But according to the experts, there’s a lot.

“I kind of like to think of them as sumo wrestlers,” says Rachel Keeffe, a biology doctoral student at the University of Florida.

Keeffe recently published a paper in the Biological Journal of the Linnean Society on the morphology of 89 species of frogs from every continent except Antarctica. From CT scans of specimens, she and her co-author David Blackburn, the associate curator of herpetology at the University of Florida, learned that even the thickest, roundest frogs are capable of great power—and not from their lower body as expected.

Unlike the hoppy and mud-wallowing frogs most North Americans are familiar with, these beefcakes don’t pack much punch with their quads and calves. In fact, they tend to wobble about when walking and can’t go very far while jumping, Keeffe says. But to make up for their chicken legs, front-burrowing frogs have enlarged pecs and forearm muscles that carry extra force, making their breaststroke powerful enough to propel them through dirt and soil.

“It often results in them having these really chubby arms,” Keeffe says.

It’s the kind of upper-body strength that can’t be achieved through a few pull-ups. These tiny, some as small as 20 millimeters, diggers have skeletal upgrades that humans could only dream of, including a thick and curvy humerus bone in their arm.

Keeffe also discovered that front-burrowing frogs have a distinct “teardrop” shape with a teeny head and a big body. The butterball shape, she says, helps conserve necessary moisture by keeping the ratio of surface area to volume low. Meanwhile, the tiny noggins might be useful for burrowing or chasing down insects underground.

Beyond that, most of the species in this group have little in common with each other evolutionarily. Keeffe saw these main traits—like front-burrowing action and top-heavy musculature—pop up at eight different points in evolutionary history, meaning that even if two chunky frogs look alike, there’s a chance that they had very different ancestors.

“These frogs are separated by huge amounts of time, and they just converged on this particular shape,” Keeffe says. Somehow across time and many amphibious families, front-burrowing lifestyles became advantageous in drier environments. Froggy bodies just adapted to fit the bill.

The next step of investigating these little meatheads is learning more about their lifestyle under the dirt. By using X-ray videos, Keeffe hopes to catch their ripped arms and chests in full-on beast mode. And by that, she means burrowing, of course.