Ancient athletes did something truly shocking with their genitals

The trend may even have influenced circumcision. 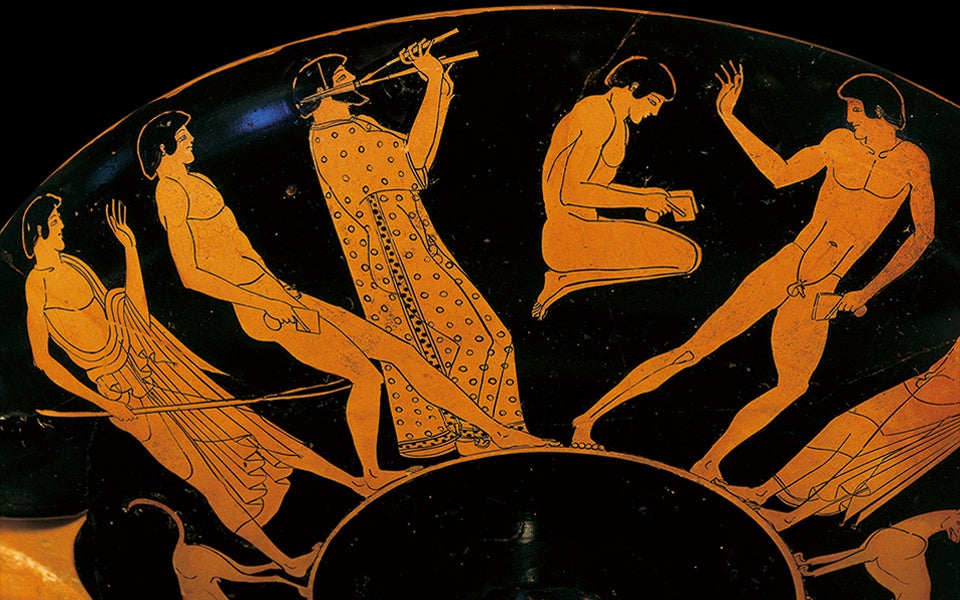 FACT: A jaunty foreskin trend may have influenced religious circumcision

While researching weird historical sex stuff (as one does) and trying to determine whether or not Prince Albert really had a penis piercing (he probably didn’t) I came across the fascinating phenomenon of the kynodesmē, which is Greek for “dog tie.” In Ancient Greece and Rome it was common—trendy, even—for young people with penises to grasp the ends of their foreskins, pull them up over the glans, and use pieces of sticky paper or strips of string or leather to fasten them shut. In doing so, they essentially bundled the glans of the penis snugly into a little goodie bag, ensuring it wouldn’t peek out to say hello while they were playing sports (or just plain playing) in the buff.

The preference for foreskin over the rest of the external sex organ seems to have mostly been due to cultural attitudes around sex and penises at the time. We discussed this a bit on a recent episode of Weirdest Thing, but to make a long story short, size was not everything in Ancient Greece. In fact, a smaller penis was considered a sign of self-control and intellect, while a large one—especially if it didn’t have a foreskin to hide demurely inside of—was a sign of barbarism.

One of the most famous examples of the practice is shown in the ancient bronze sculpture known as “The Boxer,” where the penis is not just secured within the foreskin, but tucked and tied up out of the way. But there are many pieces of art and historical texts referencing this practice (and the related use of metal pins to keep foreskin shut over the penis) in non-athletes. It seems to have been quite popular among male singers and performers, who were likely leaning into the belief that ejaculation diminished their artistic abilities.

According to some scholars, this trend even influenced the act of religious circumcision. According to a 2007 paper in Reproductive Health Matters, Jewish circumcision up until around 300 BCE required just the removal of the very tip of the foreskin. This meant Hebrew athletes traveling to Greece to compete could, as they say, do as the Athenians did: They gathered up their not-so-diminished foreskins and tied their penises up in little bundles. This allegedly didn’t go over well with religious authorities at home, especially since the young men often came back with foreskins stretched out by the practice—undoing the visual evidence of their religious practice. Supposedly, this lead to a demand that more foreskin come off during the bris.

By Ellen Airhart, host of the podcast Plant Crimes

Elephants and rhinoceroses are popular zoo attractions. But for a long time, they’ve provided a service beyond entertainment and education. Many city zoos have sold animal manure as “Zoo Doo,” “ComPOOst,” “Elepoo,” or “Zoo Poopy Doo” to city composting programs, farmers, and even Bloomingdale’s and Macy’s. In this episode of Weirdest Thing, I dive into the stinky history of poop, every zoo’s least endangered resources. Excrement from herbivores, such as elephants, rhinos, camels, and giraffes make the best compost. Carnivore poop could contain diseases, and regulators ask managers to incinerate insect poop to prevent any concealed eggs from escaping the enclosures. Some zoos, however, employ rhinoceros beetles to roll other animal’s poop into easily packable balls. However they decide to sell and market the poop, zoos have turned what could be an annoying mess into useful fertilizer.

FACT: Dimples are a defect, but people want them anyway

You hate to say it but… a dimple is a birth defect. Specifically, it’s a genetically-determined depression in what should be a smooth face muscle. Lots of people have dimples—and even more want them. In many cultures, they’re considered attractive (perhaps because so many of us idolize the chubby cheeks of youth). The desire for dimpling is so strong that in the 1930s, a woman named Isabella Gilbert of Rochester, New York, invented and marketed machine to give women dimples. It probably didn’t work and it definitely hurt a lot.

On this episode of Weirdest Thing, we poke a little deeper.