Millions of years ago, one owl species moved off the night shift, shaping a lifestyle for some modern birds of prey. 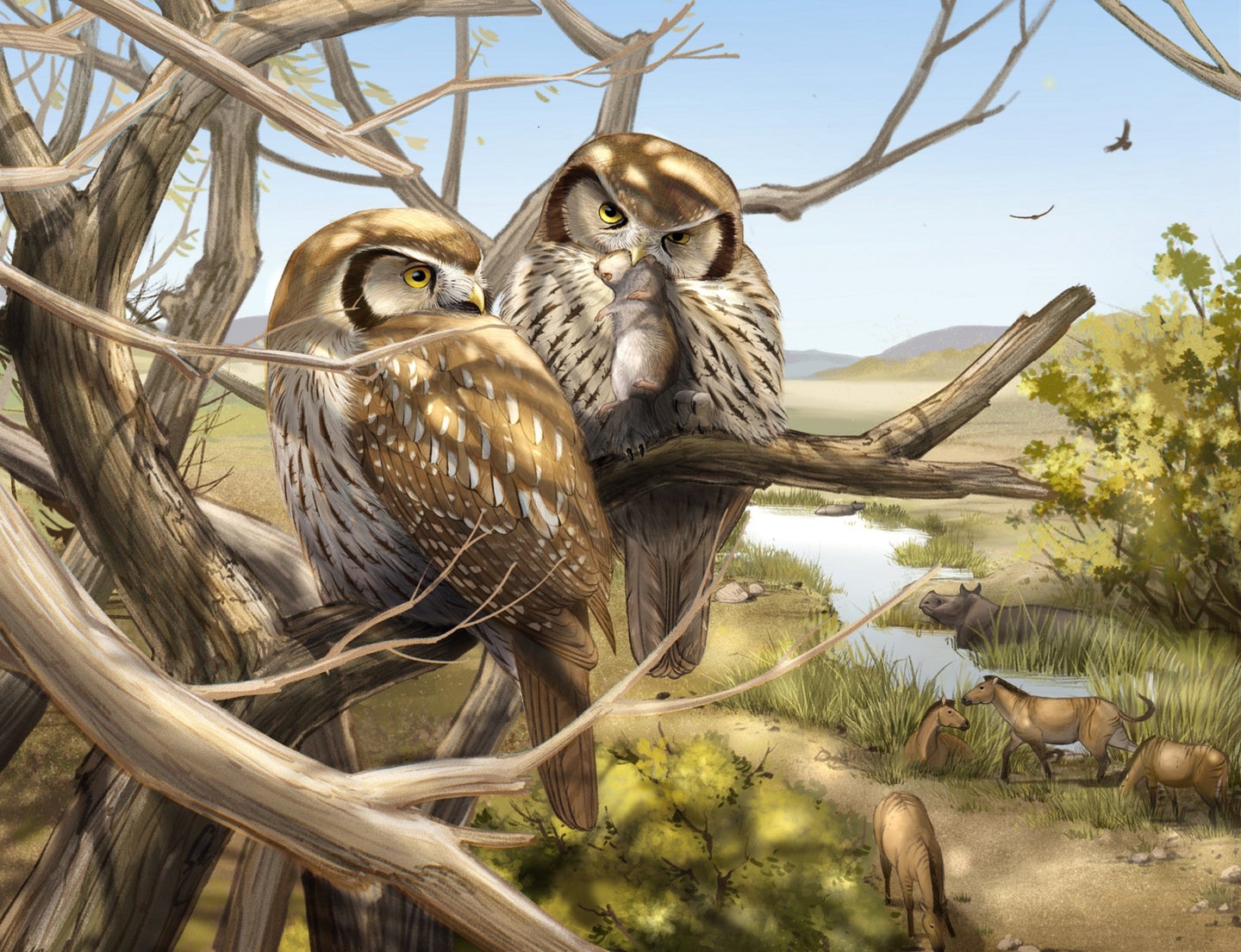 Not every owl is a night owl. Of the 200-plus owl species that fly the world today, the vast majority are nocturnal or crepuscular and hunt at dusk, night, or dawn. But a select few are diurnal or cathemeral, meaning they’re most active in the daytime, or really, anytime.

This can be determined by a species’ habitat, as well as their diet. For example, snowy owls spend their summers in the Arctic, when the sun stays up for 12 to 24 hours a day. They also mainly eat lemmings, chunky rodents that are easier to catch on the tundra while it’s light out.

[Related: Transform your yard into an owl kingdom]

But what would cause these finely tuned hunters to switch their schedules? A study published today in the journal PNAS traces an “evolutionary reversal” in one of the largest living groups of owls and presents “the first fossil evidence for diurnal behavior” among the birds, according to the abstract.

The research focuses on a well-preserved skeleton from northern China’s Ma Liushu Formation. Measuring about 12 inches from head to toe, Miosurnia diurna is estimated to be 6 to 10 million years old and is related to modern diurnal species such as burrowing owls and Northern hawk owls.

Paleontologists from the Chinese Academy of Sciences analyzed the size and shape of the extinct bird’s eye, cranial, and lower leg bones and compared them to measurements from modern relatives. The authors found that the morphological features of the fossil jibed closely with day-hunting species from the group Surniini, which includes several North American owls, including the short-eared owl and ferruginous pygmy-owl.

They also dissected an undigested food pellet in the specimen’s stomach and discovered small mammal bones like the ones extracted from kestrels (a miniature falcon that hunts by day) from the same time period. The two birds might have coexisted in dry, high savannah along the Tibetan Plateau, but “likely used different foraging strategies,” the researchers write in the paper.

In contrast with other ancient owls, whose senses of sight, sound, and even smell were suited to the darkness, Miosurnia diurna seemed to be better adapted for daytime, with large eyes and less-tubular ears that match the traits in grassland owls today. As such, the extinct owl’s environment might have been the main driver behind its behavioral shift: The study goes so far to attribute the night-to-day switch to “steppe habitat expansion and climate cooling in the late Miocene.”

[Related: An ancient era of global warming could hint at our scorching future]

For Jonathan Slaght, a biologist with the Wildlife Conservation Society, the details of Miosurnia diurna’s surroundings are almost as interesting as its evolutionary history. “It’s neat that the research shows that there were probably owls in savannahs,” he says (the paleontological record on grassland birds is still relatively patchy). But he also sees similarities between the ancient species and the bird he studies in Siberia, the Blakiston’s fish-owl. Both are part of the diverse Strigidae family, and are outliers in a way. “I feel some kinship,” Slaght says. “By modern standards this is a weird owl, and Blakiston’s fall into that category.” Though fish-owls are crepuscular, they lack key nocturnal features like wide facial discs and silent flight. This might be because they hunt in rivers, not woods, and have a different set of strategies for hooking prey.

Miosurnia diurna’s bones tease its specialized hunting skills—but its DNA could reveal far more. In their paper, the paleontologists mention that the genetic underpinnings of diurnal adaptations “would be a fruitful area of research” for others to explore. But it all points to a much larger question: What made owls become owls? Slaght, for one, isn’t making any assumptions: “I like to see owls being unexpected,” he says. Maybe, that’s what defines them in part, too.