Dogs and scientists team up to save burnt, starving koalas

The animals are still in trouble weeks after the Australian bushfires. 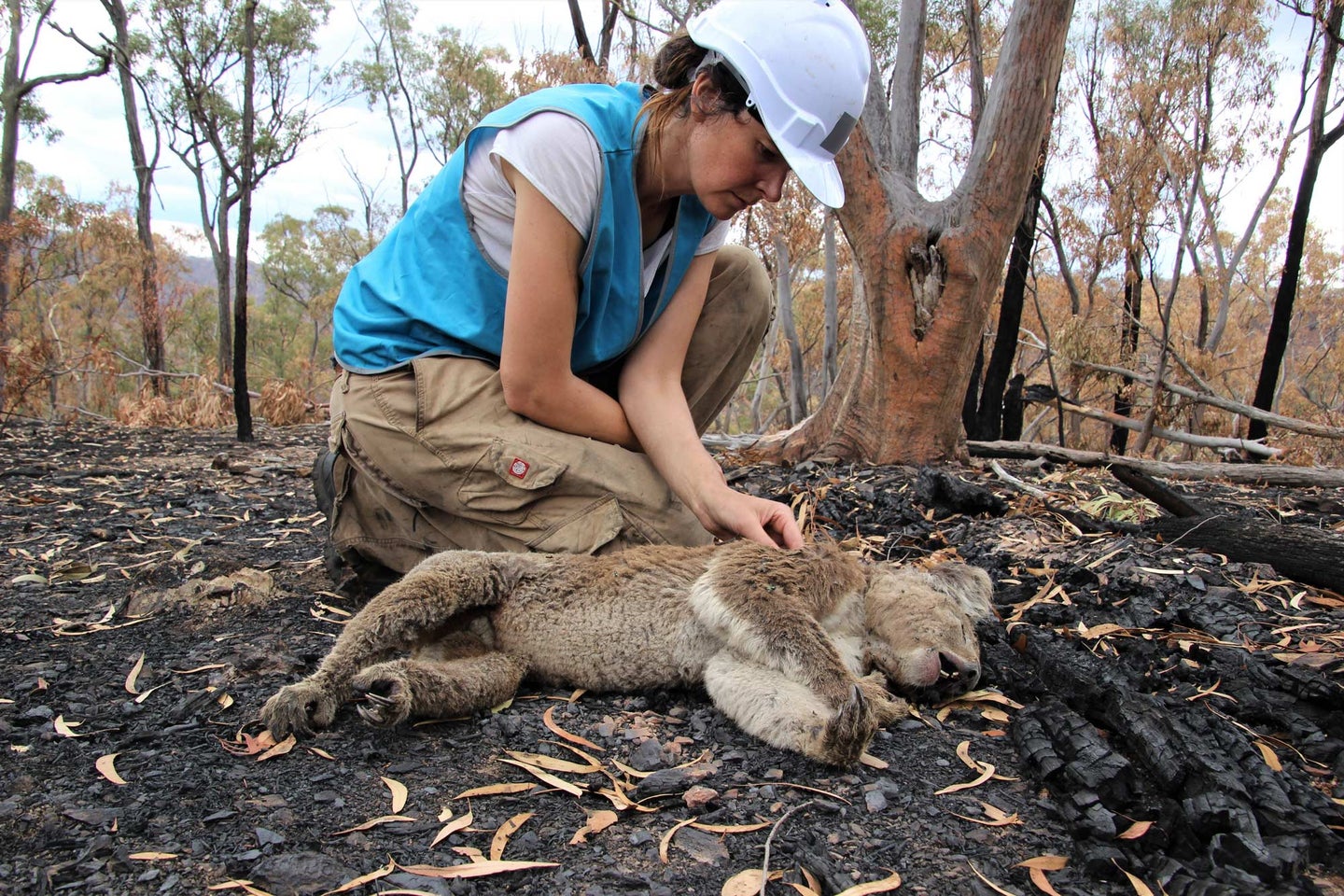 Romane Cristescu with a koala that survived the bushfires, but died afterwards. Detection Dogs for Conservation
SHARE

The plight of koalas during the recent bushfire crisis made headlines here and abroad. But the emergency for our wildlife is not over. Koalas that survived the flames are now dying from starvation, dehydration, smoke inhalation, and other hazards.

Over the past three weeks in one wildlife conservation property alone, our rescue team found koalas recently crushed under fire-damaged trees, and koalas with burnt paws after descending to the smoldering ground after the inferno had passed, hoping to change trees and find food. One of our most recent rescues was an orphaned, emaciated koala with all four paws burnt.

Koalas are also at risk of dying from infections associated with these injuries, or from the ongoing effects of smoke inhalation. Even uninjured koalas are struggling to find food in their burnt habitat and may soon starve.

There is still time to act to avoid losing more koalas. But we need the public’s help.

The fires in Australia’s southeast destroyed huge swathes of koala habitat in areas where they were already vulnerable—dehydrated and malnourished due to prolonged drought, climate change, and land-clearing.

Adding to the pressures, an estimated 5,000 koalas died as a result of the recent fires in New South Wales alone—potentially two out of every three.

Our team at Detection Dogs for Conservation rescues, trains and deploys dogs to find wildlife that needs help.

Since November last year, we’ve deployed our dogs to fire grounds in NSW and Queensland almost every week, urgently searching for surviving koalas. One of our detection dogs, Bear, is trained to find the koala itself—not just koala scats, as our other dogs are.

The International Fund for Animal Welfare (https://www.ifaw.org/uk/projects/koala-habitat-protection-with-detection-dogs-australia//) helps coordinate our activities with local wildlife rescue groups and other koala conservationists.

After bushfires, a koala’s territory is often no longer able to sustain them due to lack of food—which for koalas also provides water—or lack of shelter. Without canopy cover, koalas simply overheat.

Finding koalas can be difficult. They camouflage well, they are quiet, and usually sit still. But dogs can smell what we can’t see, including koalas. These dogs, together with our drone equipped with a thermal camera, greatly increase koala detection rates.

We believe most koalas that died in the fires were reduced to ashes, and so could not be counted among the dead. But since November, in 39 days of searches, we’ve found more than 40 injured, sick, dehydrated, or starving koalas and, sadly, six dead ones.

We’ve also observed koalas returning to their favorite trees in their home ranges, only to find the canopies completely burnt. Others survived in a small unburnt patch but are now isolated and surrounded by vast tracts of inhospitable habitat.

When we find live koalas in the fire grounds, we attempt to catch them and transport them to a local wildlife triage centre or koala “hospital” to be urgently assessed by veterinarians. Burns are obvious, but smoke inhalation is less so. Koalas in poor condition must stay in care until they’ve fully recovered.

In the past three weeks, we’ve made particularly tragic discoveries. In the Snowy Mountains, two koalas that survived the inferno had been crushed and killed under fire-damaged trees. We sighted one of these koalas three days in a row. The first two days, he was in trees he could not be safely rescued from. The third day, he was fatally crushed.

As recently as last week we found koalas suffering burns, predominantly on their paws. These animals would have continued to suffer severe pain trying to climb trees had we not rescued them. One of our last rescues was an 2kg orphaned koala with four burnt paws and the lowest possible body condition on the scale—emaciated.

We did expect to find koalas killed by the fires. But it was especially heartbreaking to find those that died afterwards. It’s hard then to not think, perhaps with more detection dogs and a bigger team, we might have saved them.

We can do more

A full search-and-rescue team comprises Bear and his handler, a drone pilot and a koala-catching crew. These missions cost money. To date, our deployments have been entirely funded by the International Fund for Animal Welfare.

We’ve established an online fundraiser to help pay for further rescue work. We are also learning from this year’s deployment how to be more efficient next year—including having the equipment, team, and budget secured prior to the fire season, which we hope this fundraiser helps us achieve.

After the devastating fire season, rescuing and rehabilitating surviving koalas is critical. Koalas reproduce slowly. The more rescued and able to breed this year, the quicker the population will increase. And every koala we rescue comes with a specific genetic make-up; the genetic diversity we can preserve now will help the species cope with future challenges.