Girl power in the wild. 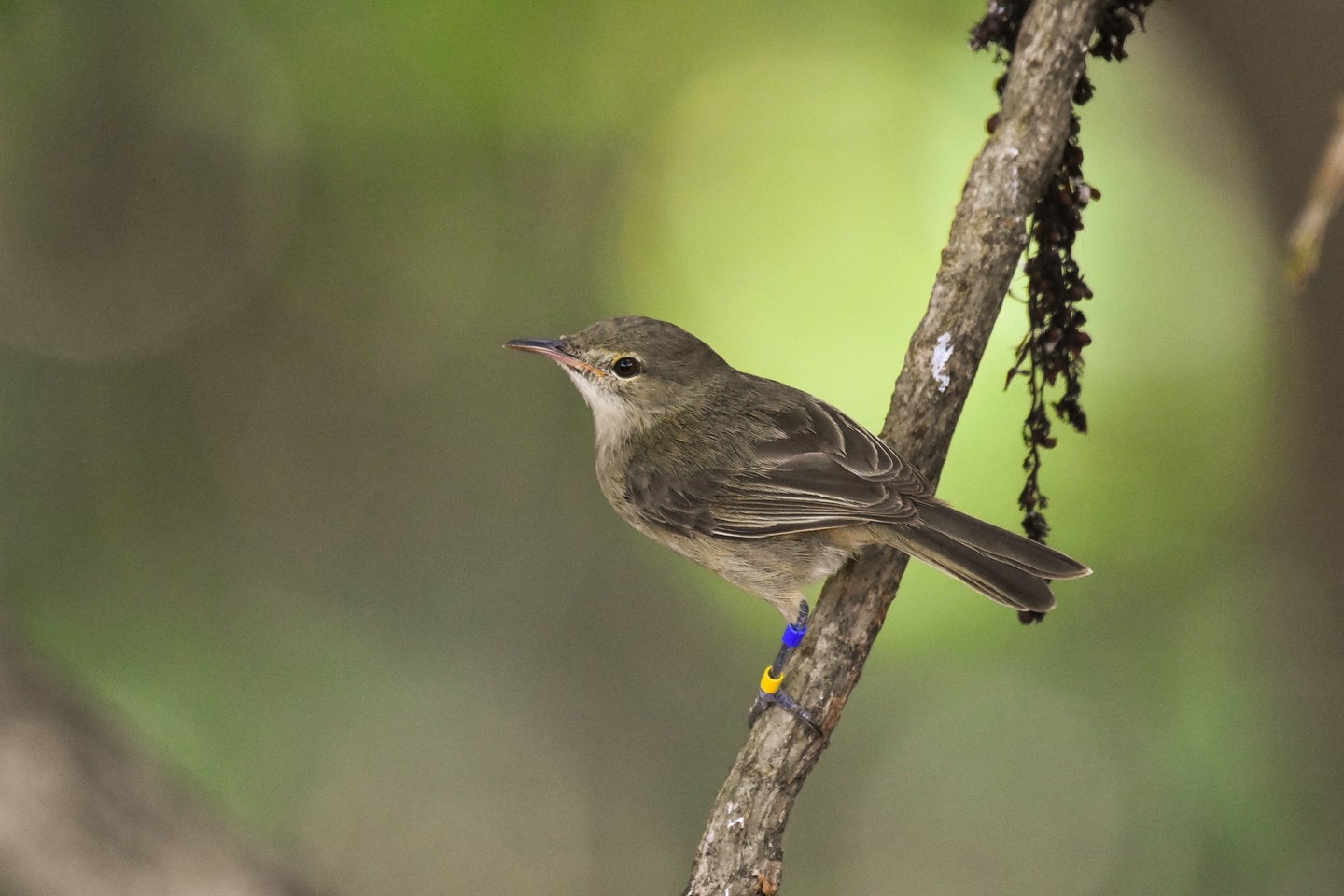 Cousin Island sounds like a tourism board built it from scratch. Its 84 acres are home to dozens of species, from blue pigeons to Aldabra giant tortoises. There are mangroves, coral reefs, and sandy beaches. But you won’t find any vacationers tanning on this particular part of the Seychelles archipelago. This fantastically diverse, privately-owned slab of granite in the middle of the Indian Ocean is operated by the conservation group Nature Seychelles. Long-term invites are open only to animals and the people who study or help to conserve them. (Tourism is confined to two-hour guided excursions.)

David Richardson is an evolutionary ecologist at the University of East Anglia with an expertise in molecular genetics. He’s been studying Seychelles warblers, a small olive-colored songbird, on Cousin Island since 1997. “The whole island works as an amazing kind of wild laboratory,” Richardson says, since the birds don’t like long flights and stay sequestered in their existing habitat. Today, every animal is banded for individual identification and monitored for reproductive success and signs of aging. Each year, Richardson takes a small blood sample from each bird, allowing him to track the diversity of the population and the health of each individual over time. Over the course of his career, he’s spent a cumulative 3.5 years on the tiny conservatory site.

In a new paper, published Thursday in the journal Nature Communications, Richardson and his colleagues used their troves of genetic data to answer an age-old evolutionary question—one with the potential to change our understanding of other animals, including humans.

Seychelles warblers present a curious case of cooperative breeding, which means parents receive help from other birds to raise their young. A parental support network may seem like a given among humans, but it’s fairly unusual among birds. Cousin Island is home to about 350 warblers, but its small size means there are only 100 or so territories, each ruled over by a dominant breeding pair. That means the other 150 warblers are left with a choice: decamp to the “barren mountain” like an outcast on Survivor and try to stay alive, or live as a subordinate in some other bird’s domain. Naturally, most birds pick the latter, leaving many subordinate females who end up helping the dominant female incubate her eggs and raise her young.

While Richardson watched this breeding process unfold, season after season, he was also watching the birds for signs of senescence, the wear and tear of aging. Though aging is often outwardly visible (“We know this happens in humans. Some people of the same chronological age are in worse condition than other people,” Richardson says) he wasn’t necessarily looking for greying feathers or male pattern bird baldness. Rather, the emphasis was on telomeres, the repetitive sequences at the end of every chromosome that start out long, but shrink over time in response to stress.

The short answer appears to be yes—especially if you’re an older avian mom. According to the paper, the probability of a breeding female under seven years surviving a given year rose a mere three percent with helpers. But the survival odds for a breeding female older than seven (the typical onset of senescence in this species) rose 11 percent with assistance from subordinates. It seems such parental reinforcements take the edge off, allowing the dominant female to find food and take time for herself, while keeping the eggs safe and warm.

Understanding why animals age at different rates, and what can be done about it, is one of the leading issues in genetics today. The quest to conserve human telomeres is unfolding in university labs around the world. But there are still more questions than answers. Seychelles warblers could help biologists piece things together. Richardson says future studies should look at how cooperative breeding helps subordinate females: how do they age? What are their telomeres like? And how does sex play a role? At least in the Seychelles warbler species, the vast majority of subordinate helpers are female, and dominant males don’t seem to get the same health-boosting affect from helpers.

Biologists are only just beginning to tease out answers, since a few decades ago, this research wasn’t possible. Seychelles warblers were among the most endangered animals on the planet, according to Richardson. At one point, Cousin Island was down to just 29 individuals. With so few breeding pairs, there was no surplus population to fill the subordinate roles, and the species’ cooperative breeding habits was obscured. But conservation has brought the warblers, and all their unique behaviors, back from the brink. Now, we know as much about the fliers—or perhaps more—than just about any other species on Earth. And they may just help us better understand ourselves.

Updated 3/22: This story was updated to reflect that the island is run by a local organization, Nature Seychelles, and that two-hour tours are available.