Baby Brood X cicadas are headed underground. What lies ahead is still a mystery.

Brood X will spend the next 17 years in burrowing, eating, and growing. But the science isn’t completely settled on how the bugs wile away or count their time. 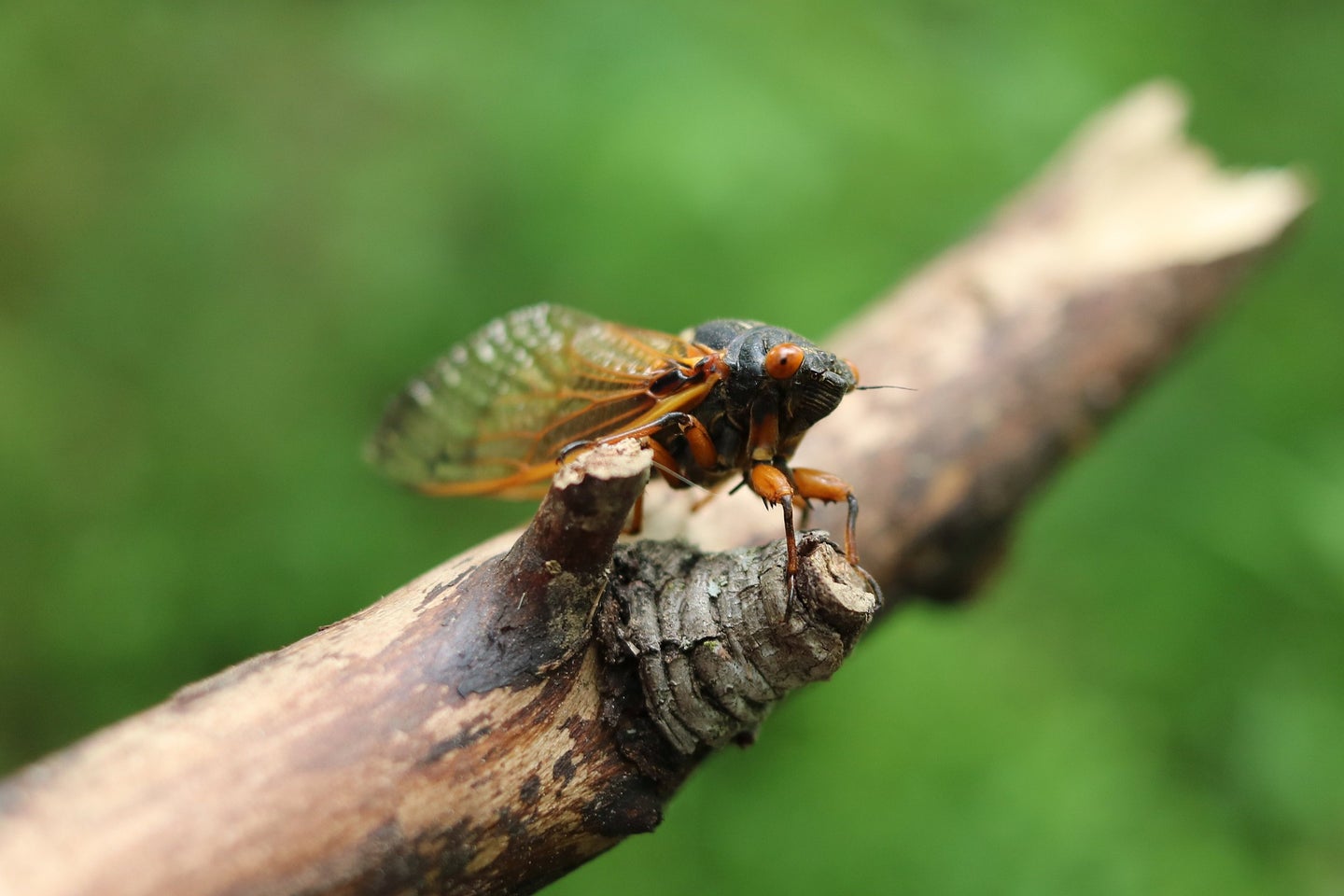 A Brood X (ten) periodical cicada perches on a branch during the 2021 emergence. Though this particular cicada is now dead, the life cycle continues on. Dan Keck
SHARE

As July passes into August, the tips of broadleaf tree branches all around the mid-Atlantic will come alive with the new generation of Brood X cicadas. A single female cicada can lay up to 600 eggs over several different nests—and though not all of them survive, hundreds of millions will hatch into miniscule nymphs, only to drop down from the canopy and disappear into the earth.

Unlike the pomp and circumstance that surrounded Brood X’s emergence a few weeks back, this midsummer bug shower will largely go unnoticed because of the nymphs’ diminutive size, says John Cooley, an entomologist at the University of Connecticut who studies cicadas. Mating is the most conspicuous stage of the creatures’ life cycle; what comes next is a quiet return to underground for a 17-year-long growth period.

But even with their enormous numbers, certain aspects of the cicadas’ subterranean phase are mysterious—and even divisive—for biologists. While the nymphs have forelimbs specifically modified to burrow like a mole’s, they can also maneuver through existing cracks and holes with their rice-grain-sized bodies. Some might even begin their journey by following the tunnels the previous generation made to crawl out of the ground.

Once they’re an inch or two below the surface, the nymphs likely feed on grass roots, says Gene Kritsky, an entomologist at Mount St. Joseph University who’s written a book on Brood X. Cooley is less sure of that idea, however. “I don’t think we know a lot about what goes on down there,” he says. “If you had X-ray vision and could look at the soil, it would be a big mass of roots, and it would be nearly impossible for you or anybody else to tell what the roots went to.”

Both Kritsky and Cooley agree, though, that the next step is for the nymphs to find deeper, more substantial roots to support their long journey to adulthood. But how low do they go? Older nymphs in their last underground stages of development can typically be found 4 to 6 inches from the surface, Kritsky says. But one cold November, he tracked them 8 to 12 inches down, which makes him think that the bugs were burrowing farther to reach warmer temperatures. Still, that depth is above the frost line in many places, Cooley notes, “which raises some interesting questions.” How do they avoid freezing? And how much do they really move between different layers and roots?

[Related: A fine dining guide to the Brood X cicadas]

Experts like Kritsky and Cooley rely on digging up cicada nymphs to study them between emergences. Getting live specimens, however, is a serious challenge: In the process of being separated from their food source, the nymphs die. In an ideal world, there’d be a better way.

“We’ve always had these fantasies of building an ant farm kind of thing” to observe the cicadas throughout their entire life cycle, Cooley says. But so far, no researchers have successfully raised periodical species (like the ones that comprised Brood X) from egg to adult in the lab. Cicadas’ soil needs are too specific, Cooley explains; he posits that the soil texture or consistency could be the sticking point. “We don’t know what is just right,” he says. “It’s something about the soil, something about the kind of roots. We’ve tried everything we can think of. Apparently, there’s some obvious but important part of the whole thing that we’re missing.”

Even the cicadas’ coolest party trick, their coordinated emergence, is still a puzzle. The same brood can mature at variable rates, yet somehow hit the same graduation cues. The leading idea is that the insects will keep track of the years through the seasonal change in trees, absorbing information as leaves grow in spring and drop in fall. “Cicadas don’t have clocks. They don’t tell time—they count,” says Cooley. “But it’s still hypothetical.”

“What we don’t know is how they remember what year has gone by,” Kritsky notes further.

[Related: Bees can tell time by the temperature in their hive]

Thankfully, researchers won’t have to wait until Brood X resurfaces in 2038 to study living periodical cicadas above ground again. A historic 221-year dual emergence is set to happen in the southern and midwestern US in 2024, when Broods XIII and XIX’s 17- and 13-year life cycles will align. All seven Magicicicada species will molt into adults at once—a phenomenon that entomologists are truly jazzed about it. “It’ll be a great opportunity to look at questions having to do with their lifecycle,” Cooley says.

In the time being, folks in the mid-Atlantic states can check out the second act of the Brood X cicada show by placing a piece of black construction paper at the base of a tree where there’s evidence of egg laying. “You’ll see the little nymphs fall onto [the paper],” Cooley says, “and then find their way down into the soil and start the whole cycle over again.”