Plesiosaurs probably took over the world using all four flippers

A debate about dinosaur movement. 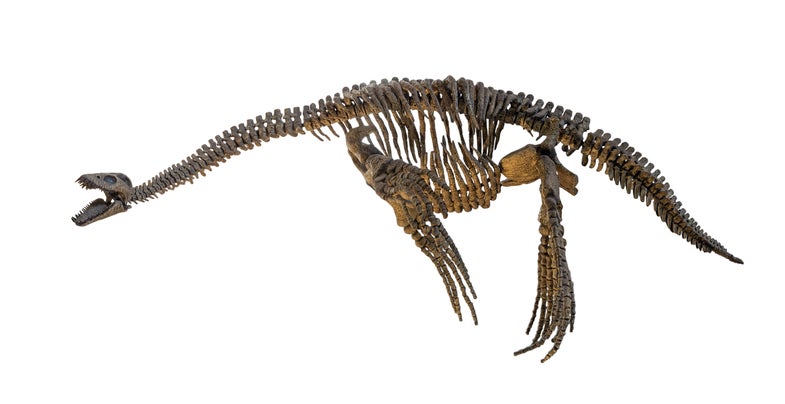 Plesiosaurs definitely had a solid strategy for moving through water. These predators dominated the Mesozoic era, and lived for a thousand times longer than humankind has currently existed.

But scientists are still working out exactly how these ancient Loch Ness Monsters got around. Everyone agrees that they swam—their massive, turtle-like flippers wouldn’t have been good for flying or clomping along on land. But researchers disagree about whether all four limbs participated in propulsion, or if just the front two did most of the work. To figure it out, scientists at the University of Southampton built a robotic replica of these flummoxing flippers. And in their model, at least, the use of all four is the most efficient way of moving about.

Despite the increased efficiency of this type of movement, no animal today uses this strategy. Without the plesiosaur research, we might have missed out on one of evolution’s secrets. “Oftentimes we can learn from what these animals did, as they may have adopted novel ways that are more efficient than the technologies humans have developed,” says Darla Zelenitsky, a paleontologist at the University of Calgary.

Since no one can go back in time and watch the plesiosaurs move, scientists had to painstakingly recreate this scenario. They then measured the efficiency of each possible flipper configuration, because natural selection tends to favor animals that can move quickly and easily.

Lead author Luke Muscutt built the model based on a couple of plesiosaur fossils from museums in Somerset and Bristol in the U.K. He relied particularly on a skeleton from the Somerset County Museum, which was fossilized at an angle that preserved the integrity of its flippers. British fishermen found it in 2003 and brought it straight to the museum, so Muscutt knew that overeager Victorian scientists had not filled in any missing bones with those from other animals. Muscutt also took X-rays of turtle, sea lions and penguins to see how modern animals deal with the problems of locomotion.

After Muscutt worked out the mathematics of how the flippers once worked, he plugged them into a 3-D printer, which created plastic models of the ancient dinosaur limbs. The researchers put the paddles through their paces and measured the way different motions affected how much water they could push away. They also measured how the efficiency changed when they varied how much the front and back flippers steered and propelled.

Muscutt and his team found that the propulsive force of the flippers increased by 60 percent and the efficiency of the movement increased by 40 percent when the robot plesiosaur used all four. “I’m surprised that we go such a large effect,” he says. “Even if we’re overestimating, there’s still a lot left there.”

These results contradict a 2015 study that found that plesiosaurs mainly moved with their front two flippers and used the hindlimbs for maneuvering and stability. These scientists created a virtual plesiosaur and ran it through virtual water. They argue that the computer simulation allowed for a greater range and variety of motion. “I don’t think we’ve heard the last word on the topic of plesiosaur swimming just yet,” says Adam Smith, curator of natural science at the Nottingham History Museum and an author on the 2015 study. “I have no doubt that plesiosaurs used their hind limbs for swimming—our simulations showed this too. But the question is how much of their role was for propulsion and how much was for maneuvering.”

He says that the kinds of motions the new study proposes would make the dinosaurs lose their balance, but adds that he would like to go back and test the computer model at different speeds. “Unstable motions may have still been favorable in certain circumstances, such as lunging for prey or avoiding a predator,” he says.

However plesiosaurs moved, they did it well enough to hunt ancient squids and escape from giant sharks. “What they did was clearly very good,” says Muscutt. “They were universal in the world’s oceans for millions of years.”