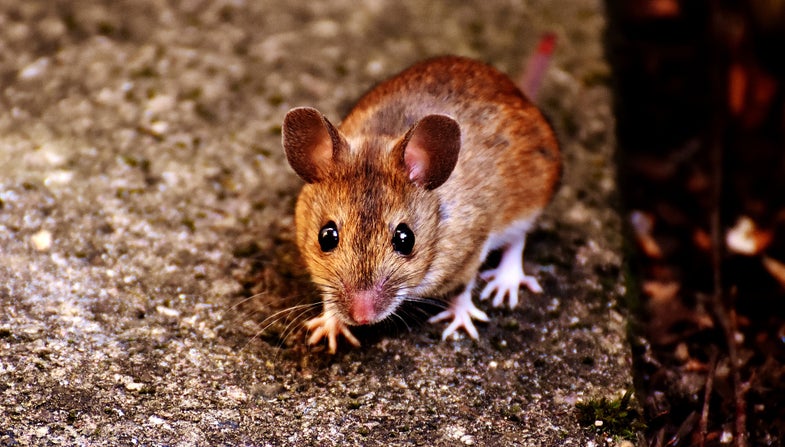 Male territoriality is a pretty well-defined scientific concept. Some animals mark their domain with rocks or urine, others attack intruders (and we’ve all seen guys who pick fights at the bar).

Researchers at Stanford University Medical Center have taken a closer look at the roots of this rage in the mouse brain, and in a study published today in Neuron, they pinpoint the brain cells that give rise to male territorial aggression. They also found that in some cases, the mice know when fighting would be a faux pas.

The neurons in question are clustered in the ventromedial hypothalamus (VMH), located deep in the center of the brain in a region that plays a role in many hormonally-controlled activities—things like fear, eating and sexual activity. It’s old news that the VMH is involved in aggression, but the Stanford researchers narrowed the culprits down to approximately 4,000 cells with receptors that detect sex hormones.

“It’s a needle in a haystack compared to the 80 million neurons in the mouse brain,” says Nirao Shah, senior study author and a professor at Stanford University.

When the researchers activated these neurons, the mice got riled up and ready to rumble. They rattled their tails and attacked, even when confronted with female mice—a rare behavior for males—or something that wasn’t a mouse at all, like a mirror or a glove. When these neurons were triggered, the mice were territorial even if they were the intruders themselves, off of their home turf.

But some mice had better manners. Shah and his colleagues found that when mice were housed in a cage with other mice, they became more docile than rodents who lived in cages alone. When scientists activated their clusters of VMH neurons, the mice still aggressively defended their cage against intruders. But when placed in a different mouse’s cage, they didn’t attack, even when the VMH neurons were activated—these mice knew they were guests in someone else’s home.

“Although we’ve activated the circuit, the mouse realizes [aggression] is not the appropriate behavior to show, since they are entering somebody else’s cage,” Shah says.

These social graces appear to come from the ability to detect the other mouse’s pheromones, a sort-of chemical signature that each secretes. When the researchers blocked the the mice’s ability to sense those smells, firing up the aggression neurons triggered an equally furious response in group-housed and solitary mice.

“People always ask, is it nature or nurture,” Shah says. “The usual answer is, it’s not a dichotomy: It’s never just nature or just nurture, there’s an interplay between genes and the environment. We’ve activated the neurons—the nature part of the experiment—and nevertheless, social conditioning—nurture—can shut down the behavior.”

“The strengths of the article are clearly the attention to several key variables that are often overlooked in aggression research,” Miczek says. Dayu Lin, an assistant professor of psychiatry at NYU Langone Medical Center who was not involved in the study, agreed that the apparent dependence on housing conditions and environmental cues was new and intriguing.

In future studies, Shah hopes to figure out how exactly group housing makes the mice more sensitive to pheromones. He also wants to understand how the neurons are actually linked to aggression in the first place, and whether male territorial aggression might have an electrical signature in the brain.

It’s possible that the findings will help us understand aggression in other species, including our own. Lin says group housing decreases aggression in some other organisms too, such as flies and fish, and Shah notes that the mouse neurons in question have a similar function in other mammals. He even speculates that it could explain human behavioral conditions like intermittent explosive disorder, a condition marked by unprovoked outbursts of disproportionate rage—kind of like the mouse attacking something innocuous like a glove.

“We think this will be a fairly transferrable finding,” Shah says. “We will see if this model of aggression can help people working at the bedside to think about how we can treat aggression.”