Where will all the water from Hurricane Harvey go?

It will leave very, very slowly. 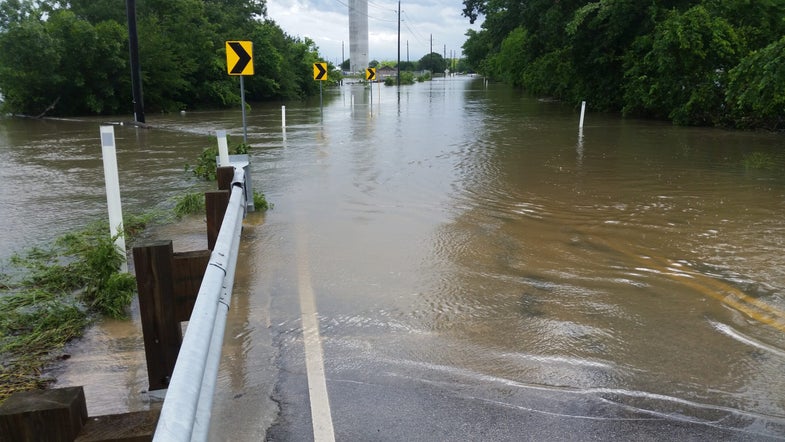 Floodwaters were still flowing through Houston on Tuesday, even as the persistent drumbeat of rain began to slacken. Cars sat like islands in rivers that were once roads, and people pitched tents on their roofs to wait for rescue.

A look at some of the damage caused by #Harvey via examples submitted through the @fema app. Please be safe while taking photos. pic.twitter.com/sz7HiHEP2W

The amount of rain dumped on the city is mind-blowing by any measure. Record-setting rainfall totals are coming in from rain gauges, including an astonishing 49.2 inches that broke the record for rainfall in the state during a Tropical Storm.

The National Weather Service even had to adjust the color coding on its rainfall map to account for all the water.

#Harvey in perspective. So much rain has fallen, we've had to update the color charts on our graphics in order to effectively map it. pic.twitter.com/Su7x2K1uuz

All told, estimates for the amount of water that has already fallen number in the trillions of gallons with roughly 20 trillion gallons predicted to fall by the time that the storm passes.

Houston is a large place, but that much water falling in such a short period of time leads to the enormous amounts of flooding that we see today. Here’s where that water will go as it recedes.

Back to the sea

Unsurprisingly for a city on the Gulf Coast, the vast majority of the water dumped on Houston will head back out to sea. But the route it takes from the city to the shore will, for the most part, be slow and painful.

“Think of a major interstate down to one lane at rush hour,” says Bob Holmes, National Flood Hazard coordinator with the Unites States Geological Survey. “The water has to get out to the ocean, but it can only flow down this small channel. It will take a while for all that to empty out.”

The flooding can also be compounded by storm surge, which raises the sea level, essentially adding a blockade to the traffic jam.

The road rage of a driver stuck in an interminable traffic jam is nothing compared to the power of trapped, raging waters. Already, one levee designed to keep floodwaters under control has broken, leading to evacuation orders south of Houston.

And that’s not the only design problem that the city faces.

Houston has two reservoirs, the Addicks and the Barker, that were expressly constructed in the 1940’s to help contain floodwaters. But they are being pushed past capacity, with some early reports of water overflowing from one of the dams. The Army Corps of Engineers began releasing water from the dams on Monday, but the levels are still rising faster than they can be contained. Neighborhoods near the dams face increased flooding as it all seeks to return to the sea—trying to cram into every creek, river, bayou and low-lying patch of ground it can.

In Houston, unfortunately, just about everything is low-lying. Normally the slow, meandering creeks and streams make their way through relatively flat areas at a sedate pace. That’s because there isn’t much of a slope, or gradient, to those bodies of water. The flow isn’t getting much of an acceleration assist by gravity, as it would in a more hilly or mountainous area.

“The water is going to take a while to recede because of the low gradient,” Holmes says, “and It’s going to be carrying a lot of things with it,” he adds.

Spending so much time flowing over the asphalt and homes and sewage in Houston, the water is bound to pick a few things up. Holmes says that it’s possible that floodwaters will pick up pollutants like oil, chemicals, or other contaminants like human waste and sweep those towards the sea too.

With the waters moving so slowly, some of those pollutants won’t travel far. They’ll attach themselves to dirt and sediment, settling out of the flow. Some of these particles will be deposited on land, and others out at sea—but wherever they fall, people are urged to be wary of the potential dangers.

The CDC warns of diseases and harmful chemicals that could be contained in floodwaters, and cautions those in wet areas to avoid coming in contact with the waters whenever possible. The CDC also recommends washing off contaminated clothing, throwing out soggy food, and wearing protective clothing like gloves when attempting to clean up or get out of floodwaters.

But not all of the water will make its way to the sea. A small portion of it will sink into the ground. But in a situation like this, that’s going to be even less than you think.

That’s in part because of the speed and volume of rainwater falling onto the landscape. If the amount of water had been spread out over a larger amount of time—a slow and steady rain instead of a catastrophic deluge—the soils around Houston might have been able to hold more. As it is, they can only take on so much water.

“At a certain point the surface soils will reach a point where they can’t infiltrate any more water—they’re full,” Holmes says, likening the ground in those conditions to a saturated sponge.

Unfortunately, Houston isn’t nearly as spongy as it used to be. Much of the low-lying area surrounding the city used to be coastal prairie, filled with grasses bearing extensive root systems that could absorb more moisture than the asphalt and concrete that now coat the area.

As water faces congestion in routes to both the ocean and the soil, there are few other places for the flood to go. Houston’s humid climate keeps the air heavy with moisture, so evaporation happens slowly.

But other items are already soaking up some of the water that now blankets Houston. Carpets, upholstery, clothes, and timbers are quickly absorbing some of the flood waters that cover them.

“The longer the water sits in there, the more long-lasting irreparable damage people will face” Holmes says.

Even without the added pollutants found in floodwater, soaking can be very dangerous for a building or home. Water can not only cause structural damage, it can also provide a place for mold to live and grow. The CDC encourages people returning to their homes after a flood to try to dry everything out as much as possible, as quickly as possible—ideally within 24-48 hours. Anything that can’t be thoroughly dried, like carpets or upholstery that have been soaked for more than 48 hours, should be removed and thrown out.

The good news for Houston’s residents is that Harvey’s waters will eventually recede. The bad news is, once they’re gone, the city’s long road to recovery will only have just begun.