You probably wouldn’t know one if you saw one. 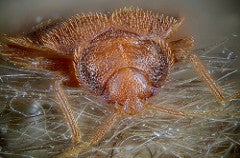 Bed bug, termite, or louse? Only 35 percent of business travelers (and a scant 28 percent of leisure travelers) could identify a bed bug from an insect lineup, despite the fact that nearly 60 percent of travelers said that if they found one, they wouldn’t just switch rooms—they’d switch hotels.

American travelers may be unable to tell a tick from a bed bug, concludes a study published today in American Entomologist, but we sure know we hate them.

“Hotels are really second only to homes and apartments as to where bed bugs are likely to occur,” says study author Michael Potter, an Entomologist at the University of Kentucky. “There’s been a lot of news coverage about bed bug incidence in hotels, but there’s never been a study to actually assess the attitude towards these pests by those who travel. The hotel and lodging industry is particularly vulnerable to occurrences because of the power of social media and the potential impact of these reports of bed bug bites online, and how people respond when they find or think they find a problem in a hotel room.”

For almost a generation, bed bugs had become less fearsome and more fantastical. Many of us grew up saying the expression, “sleep tight, don’t let the bed bugs bite,” believing that bed bugs were as real as Lewis Carroll’s Jabberwocky. Unbeknownst to many of us, it was the crazy chemical days of the 1950s and 60s that had eliminated bed bugs as a credible threat. DDT might have nearly wiped out America’s birds (and much of its wildlife) but it also temporarily took down the bed bug.

That changed towards the beginning of this century, as insecticide-resistant bed bugs began to reemerge. New pesticides don’t work as well on them, because they target the same pathways in bed bugs as DDT—and the insects have evolved to handle them. This, combined with the fact that they strike us in our beds while we sleep, makes them feel like the ultimate violation. The thought of a roach infestation may make you shudder, but most of us would take that horror show over an encounter with bed bugs any day.

The problem, according to the study, is that the fear doesn’t really match the problem. Sixty percent of business travelers and 51 percent of leisure travelers would be unwilling to stay in a hotel with a single online report of bed bugs; even, though as the study’s bed bug identification report attests, those self-reports are likely to be inaccurate.

Our fear of bed bugs can be pretty costly for hotels, either because they’re left treating rooms that don’t actually have bed bugs, or because a bad review can leave them high and dry even if their bug problem is well contained. Here’s the thing: one room with a bed bug does not an infested hotel make. And yet, a third of respondents said that if they actually found a bed bug in their room, they would refuse to stay at any hotel of that brand. It’s almost as if they think bed bugs had loyalty cards.

While interviewing Potter, I recounted my own experience with bed bugs: I once stayed in a hotel where a colleague found bed bugs. They changed her room, comped it, sent her clothes out for cleaning, and even gave her an outfit to wear in the meantime. That seemed pretty reasonable to me, and I assumed that since her original room was on a different floor than mine, I was relatively safe.

Potter says that’s a pretty safe assumption. Absent a significant infestation, a bed bug in one room doesn’t mean that there’s a bed bug in another room—especially one in another part of the hotel. If you’re in an adjoining room you might have a reason to be concerned, but if you’re on a different floor or a different wing, not so much. Bed bugs can travel, yes, but they can’t yet bend spacetime. And perhaps more importantly, he notes, the hotel responded correctly. “That’s the response that we hope for,” says Potter. They contained the problem and acted to fix it immediately. That kind of response should make you feel reasonably confident in an establishment’s ability to stay (generally) free of bed bugs. You shouldn’t knock a place for a few bed bug incidents.

“Bed bugs are pretty non-discriminatory,” says Potter, “and they have nothing to do with filth.”

Still, bed bugs are gross, and nobody enjoys the itchy welts that their bites can create. So, what is the bed bug skittish traveler to do?

“I do a cursory bed check,” says Potter. “The most likely place you’ll find bed bugs in a hotel room is behind the headboard, because the carbon dioxide and the heat tends to be where the bugs congregate initially. But those headboards can be difficult or impossible to get off of the wall.”

Instead of ripping the headboard away, Potter checks the corner and the seams around the headboard area. “That’s maybe the easiest place to check, but the highest chance of payoff,” he says.

Then he’ll pull back the sheets and check the upper and lower seams for bugs and fecal spots. Sure, there could still be bed bugs in a mattress that lack the classic signs. But these checks should reassure you. And there are steps you can take to limit the impact of any bed bugs you fail to spot.

“I don’t leave my suitcase wide open with clothes strewn all around the bed,” says Potter. “I tend to zip it up and put it on a credenza or a dresser surface. Just in case you’ve got issues, you’re less likely to transport them home.”

But, says Potter, there are limits to what he’ll do to prevent taking bed bugs home. Some travelers actually store their suitcases (with clothes still packed inside them) in the bathtub for maximum safety. “Personally I think that’s stupid,” he says. “If you want to do it, fine. But I don’t think it does that much good. And who wants to live out of a suitcase in a bathtub?”