Important things found in Antarctica this week: 91 volcanoes and also a fruitcake

And what they can tell us about the mysterious southern continent. 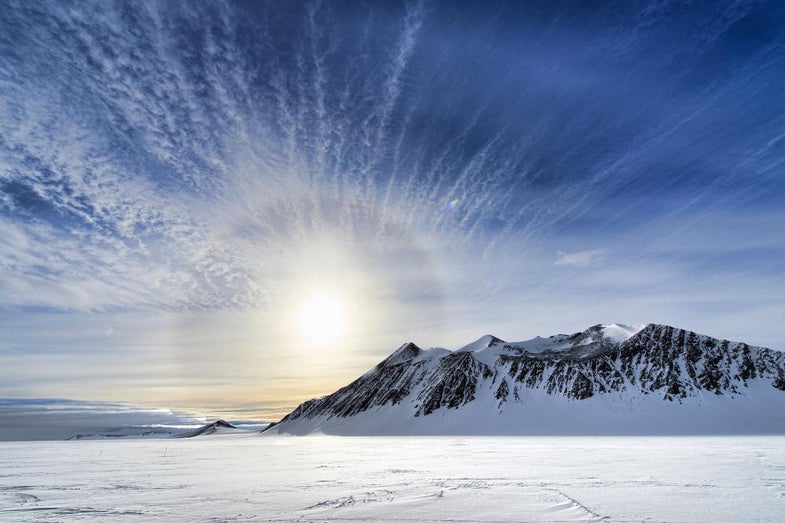 These aren't volcanoes, but a picture of the ice that the actual volcanoes are under wouldn't be very interesting. Flickr user Christopher Michel
SHARE

Volcanoes in Antarctica and chunks of fruit in fruitcake are both way more common than you might think. But at least the dried cherries won’t contribute to climate change.

This week, a group of researchers from the University of Edinburgh discovered 91 previously unknown volcanoes in one region of West Antarctica. Meanwhile, the Antarctic Heritage Trust found a 106-year-old fruitcake at nearby Cape Adare. To be clear, these are not equally important findings. Fruitcakes, while excellent punchlines in all manner of holiday jokes, don’t indicate how glaciers might move or melt. They cannot tell you anything about the geology of a region (though their survival makes it clear just how freaking cold and dry the air is). Volcanoes, on the other hand, can tell you a lot.

It might seem strange to you that there are so many magma-laden mountains buried beneath a giant sheet of ice. Fire and ice don’t go together (except in songs and certain fantasy novels, of course). The reality is that Antarctica is actually a prime breeding ground for volcanoes.

Those exploding mountains aren’t producing the magma they spew—they’re basically just holes in the Earth’s crust that allow the molten layer to peek through. Most parts of the crust are too thick for a hole to randomly form, so volcanoes tend to show up at certain weak points. The edges of tectonic plates— giant chunks of crust essentially floating on the hot magma underneath—tend to be geologically active areas. Two plates sliding against each other lead to earthquakes, chunks pressing together can form mountains, and rifts and valleys open up where plates move apart.

Volcanoes tend to arise in those last two scenarios, since the same motion can force magma up and out of the rupture point. The Pacific Ring of Fire is one giant converging line, whereas the Mid-Atlantic Ridge is a diverging line.

Antarctica’s situation is entirely different. The preponderance of volcanoes there isn’t because two separate plates are moving, but rather because one plate is stretching thin. All of Antarctica sits on a single plate (aptly named the Antarctic plate) but that chunk is slowly starting to separate. A similar thing is happening in East Africa, where geologists estimate one plate will split into two in about 10 million years. In the meantime, a crop of volcanoes has emerged where the crust is wearing thin.

The West Antarctic Rift System, where the Edinburgh geologists found the new volcanoes, is spreading in the same way. It’s just harder to study because of all that ice.

It’s unclear whether these volcanoes will erupt any time soon

So okay, there are lots of volcanoes under the ice. What we all really want to know is: will these things erupt? And really, will they erupt any time soon?

The unsatisfying answer is that we aren’t sure. Clues as to the actual activity going on down there point in both directions, and the way that the researchers found the volcanoes doesn’t tell them anything about the activity. They basically mapped the crust beneath the ice and used a mathematical model to determine which mountain-like structures were likely to be volcanoes. Since there were already 47 known volcanic points, the geologists could predict which shapes tend to be volcanoes as opposed to just mountains. But the shape of a volcano doesn’t determine how likely it is to erupt.

Some previous studies have suggested that the section of crust that West Antarctica sits on is particularly unstable, which would make eruptions more likely. But the rift is unusually low in elevation, and active volcanic areas tend to be high in elevation. Then again, the volcanoes don’t seem to have eroded much, and that would mean they’re geologically young—and therefore more active. So the upshot is: we have no real idea.

Yes, an eruption beneath Antarctica would melt massive quantities of ice, raise the sea level, and produce general chaos. But perhaps the more concerning (and more realistic) scenario is that lots of tectonic activity and a thinning crust will heat the bottom of the Antarctic ice sheets. That would change how glaciers move and how fast they’ll melt in ways that we can’t predict right now.

Oh right, about that cake…

Why take a fruitcake to Antarctica? For starters, it’s calorie dense. When you’re strapped for space and in need of lots of energy to keep your body heat up, it’s useful to have calorie-dense foods.

It’s survived for so long because Antarctica is basically a giant freezer. And a nice dense, dry fruitcake wrapped up and sitting inside a tin is a recipe for preservation. It only had a faintly rancid smell to it, reportedly, but sadly no one was game to take a bite. It’s going to get further preserved and restored (the tin, not the cake), and will then be put back in the hut where it came from. Antarctic tourism is sure to boom as folks clamor to see the old English treat.