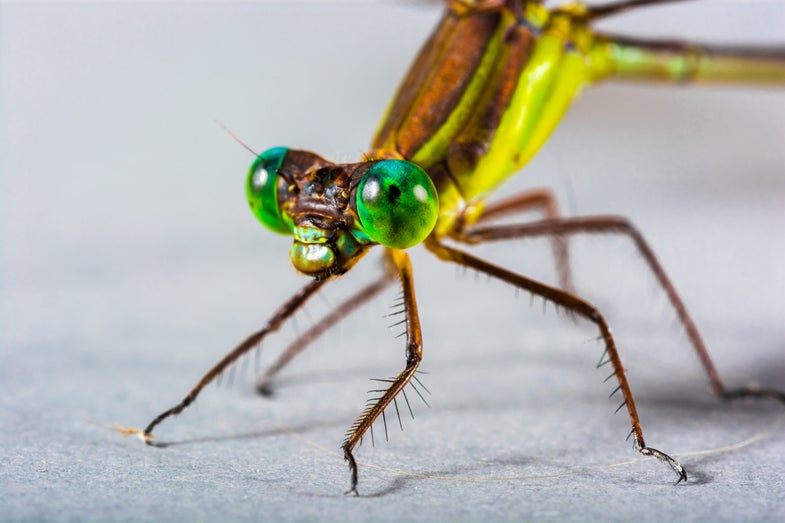 You’re a lady dragonfly. You’ve just had sex with some dude (is there such a thing as a female dragonfly orgasm?) who finished and flew away immediately, leaving you to find a safe place to lay your eggs. And now this other guy just will not leave you alone.

You tried crossing to the other side of the stream, but he just crossed after you and yelled something about how pretty your wings are. So you pull out your last line of defense against unwanted suitors: you play dead. And, like a dog who realizes his chew toy isn’t that interesting after all, the male dragonfly heads elsewhere.

Welcome to life as a female animal. The sex is mediocre at best, you probably have no help raising your kids, and you’ll almost certainly die young.

This newest sexual revelation about dragonflies comes via a study in the journal Ecology that was supposed to be about climate change impacts. But while observing moorland hawker dragonflies, PhD student Rassim Khelifa realized that the ladies were frequently faking their own deaths. Once a female hawker has mated, any subsequent mating can damage her reproductive tract, so she’s highly motivated to avoid aggressive males who might hurt her. And since the word “no” does not appear in the dragonfly lexicon, she resorts to a dramatic death. She freezes mid-air, as though a tiny heart attack has struck, then plummets to the ground and lies motionless. Her would-be partner then skidaddles off in search of some other female to prey on.

Not that this is even the worst animal sex story. Faking your death and then moving on with your day is nothing compared to the plight faced by female ducks. Lady ducks endure so much sexual coercion that they’ve evolved spiral-shaped vaginas that twirl in the opposite direction from their male counterparts’ penises—and have dead ends, like a biological version of the traps set for grave robbers inside the Great Pyramids. And yes, that does mean male ducks have spiraling penises. They are just as awful as you’re imagining. They shoot out and expand—sometimes to over a foot long—and honestly, you should just go ahead and watch this video of the process, because you know you want to:

Male bottlenose dolphins will gang up two or three at a time on an unsuspecting female and basically force her to be their sex slave. They also kill baby porpoises by targeting their vital organs using sonar. That’s not an awful sex fact, just a general reminder that dolphins are jerks.

Giraffes mostly seem to have male-on-male sex (though the study suggesting this does have some flaws), but when the sex is for reproduction it’s fairly upsetting. The male first whacks some pee out of his female partner, which is actually a common method in the animal world to test whether a lady is ovulatin’, then he kind of follows her around trying to mount her violently while she keeps walking away. The fact that she doesn’t run away neighing to tell her girlfriends about that creep over by the tree is a testament to evolution’s power to make bad sex seem normal.

And whoops, we’re not done. An invasive species of guppy in Mexico likes to harass and mate with fish of other species, even when female guppies are available. Seed beetles have spiny penises to physically hold down the lady seed beetles. Basically all primates attempt to intimidate the females in their species, sometimes even when they’re not resisting. Male dogs have a kind of “knot” in their penis that prevents the female from moving away until he’s done. Yes, male domesticated dogs. Remember this when your sweet little puppy greets you at the door tonight. And for once, be glad you’re a human.