To Stop A Hurricane, Shoot It Full Of Dry Ice?

From the PopSci archives, an audacious plot to knock out hurricanes 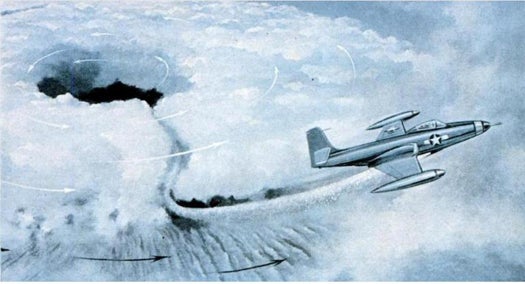 What’s crazier than a Frankenstorm on Halloween? This U.S. Weather Bureau plan from 1956 to steer away hurricanes by seeding them with dry ice. Weather scientists hoped that shooting pellets of solid carbon dioxide into a storm’s clouds would unbalance it enough to send it off course (and hopefully not just make it angry.)

This June 1956 Popular Science article admitted that even the researchers behind the scheme thought it was somewhat brazen. But, as one unnamed specialist said, “Hurricane control is such an important subject that we cannot afford to overlook any possibilities.”

During the 1960s, the U.S. government explored releasing both dry ice and silver iodide into storm clouds, but the experiments were inconclusive. In 1983, Project Stormfury was shut down.

Read on for more from “Can We Steer Away Hurricanes?”

First, you sprinkle cherry-sized pellets of dry ice on a cloud – it must be a super-cooled cloud, its temperature below freezing. The dry ice immediately produces tiny ice crystals. Each crystal becomes a nucleus around which more moisture from the cloud freezes. This forms snowflakes of rapidly increasing size, which fall through the cloud. When the snowflakes reach warmer altitudes they melt into rain.