Simple tips for getting black bears to leave you alone

The more prepared you are, the easier it’ll be to scare them off. 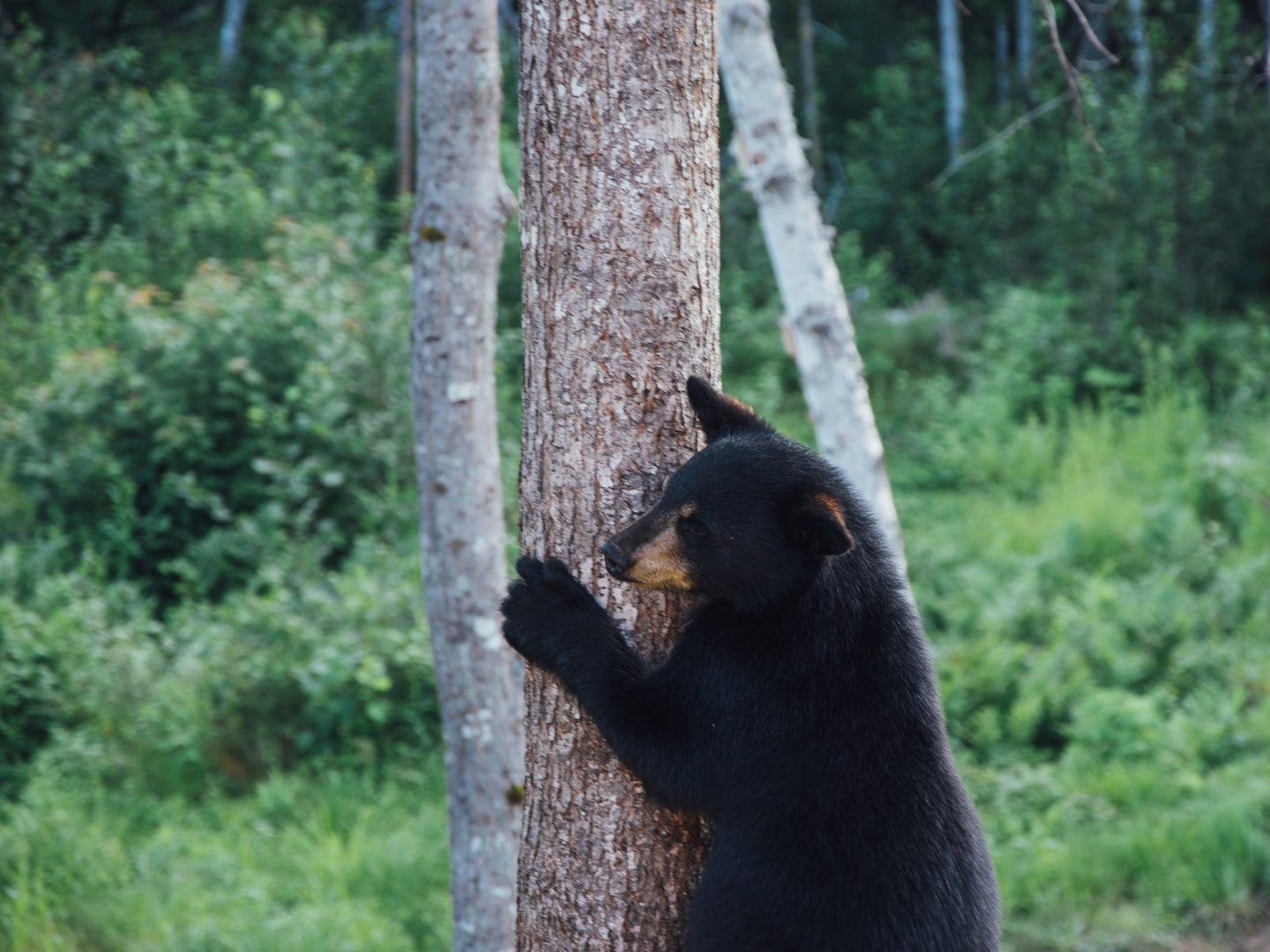 Cute, yes, but not when it's trying to steal your food. Alexandre Brondino/Unsplash
SHARE

Bud Ahrens thought he’d done everything right, but a bear still found him.

After setting up camp in the Boundary Waters Canoe Area Wilderness in Minnesota, he and his camping companion put away their gear, hung their food from a high branch to keep it out of the reach of bears and other critters, and cleaned up food scraps and dishes before heading down the trail for some hiking and rock climbing. But when they returned to camp later that afternoon, they stopped in their tracks—there was a black bear on top of their flattened tent.

The animal had honed in on their single mistake: a forgotten bag of trail mix in a pant pocket stashed away in the tent. Now Ahrens, winter program director at Voyageur Outward Bound School in Ely, Minnesota, had to figure out how to run off the curious black bear and salvage what was left of their slashed-up shelter.

When they succeeded, they breathed a sigh of relief, lowered their food bag, and walked 40 feet down the trail to see off some canoers. They were gone for mere moments, but when they returned, the bear had, too, and was trying to abscond with their food.

They waved their arms, threw rocks toward the bear, yelled at the top of their lungs, and, fortunately, were able to scare the bear away for good, saving their only sustenance from being devoured by the omnivorous forest-dweller. But because they were informed and prepared, they knew how to properly respond to the surprise encounter.

Know before you go

A bear in your camp might seem like a terrifying situation, but Ahrens laughs as he tells the story. He’s had many encounters with black bears in his years of hiking, camping, and canoeing in the Boundary Waters wilderness, and he’ll likely have many more. But that doesn’t stop him from venturing out, because he knows enough about bears to feel comfortable reacting to their presence.

For starters, he knows that black bears are more timid and easily scared than grizzly bears—their larger, more aggressive cousins. Even though black bears can weigh more than 500 pounds, have claws around 2 inches long, and will easily win a fight if provoked, it is very unlikely that they will attack a human.

He also knows black bears are especially active in the spring when they’re coming out of hibernation hungry and ready to fill their bellies, and fall when they are looking to pack on the weight before winter. That means you should be extra careful about securing your food during those seasons.

Additionally, he understands that mother bears, like any animal, are very protective of their young and should be treated with an abundance of caution. Yes, baby bears are cute, but you should never approach one, as its mother will likely perceive you as a threat and become aggressive.

Despite the presence of black bears in most areas of the country, it’s rare that they kill even one person in a given year. Those infrequent deaths are typically the result of abnormal occurrences such as sick or hungry bears, or people getting too close, often with dogs. In fact, most of the damage black bears do is to dumpsters, tents, and food bags, not hikers.

Even so, Ahrens says you shouldn’t head outdoors before asking a ranger if black bears have been spotted in the area, whether they have cubs, and even if it’s been a good year for berries (more fruitful bushes mean black bears will be less likely to be tempted by food at your campsite).

Have an anti-bear game plan

When it comes to black bears, your best course of action will be to avoid an encounter to begin with, and that means taking necessary precautions. Start with food waste. Don’t leave food scraps or trash on the trail or around your campsite. Not even fruit cores or peels, which can attract wildlife and take years to decompose.

You also shouldn’t leave dirty dishes around camp or dump leftovers or dirty dishwater in the fire pit—those smells can attract bears. Clean your dishes and dispose of any waste at least 200 feet away from your campsite.

And always store your food in a bag when leaving camp or going to bed. Often called bear-bagging, it involves placing all your food, including food trash like wrappers, in a bag and hoisting it high into the air using rope or cord and a sturdy tree branch for leverage. Tie the rope to the trunk or a low branch and make sure the sack hangs 10 feet above the ground so a bear standing on its back legs can’t reach (black bears can stand up to 7 feet tall and extend their paws around 2 feet more) and far enough from camp that you won’t be in immediate danger if a bear does try to swat it down.

But don’t just put food in your bear bag or canister. “The bear’s palate is a lot less refined than our palate,” Ahrens says. “If it smells, it should be packed away and put in the bear hang as well.” That includes lotion, chapstick, toothpaste, and deodorant.

If there are no large trees in your area, pack all your bear-enticing items in a bear canister (a solid, bear-proof container) and tie it to the base of a small tree, bush, or boulder to keep it from rolling away or being snatched by a bear. Ahrens also suggests placing clean pots and pans on top of the canister. This will act as a wake-up call: if a bear or other creature tries to get into your stash, it will likely knock the pots off, making enough noise to alert you.

In developed campgrounds within bear territory, you’ll often find lockers at each campsite for food storage—you can use those instead of a bear bag or canister. As a last resort, store food inside a fully closed and locked vehicle.

And when you head to bed, keep headlamps or flashlights and something that makes noise inside your tent in case you wake up to a black bear in camp and have to scare it away.

Know how to respond to a black bear

If you do find yourself too close to a black bear and it either hasn’t seen you or doesn’t seem interested, keep your distance—300 feet if possible—and cautiously vacate the area. If the bear has meandered into your campsite or close to you on a trail, however, you’ll have to take action.

“Let the bear know this isn’t a place where it’s welcome,” Ahrens says. “Let it know this is our home, not your home; our food, not your food.”

That can mean carrying bear spray if it makes you feel more protected, but often, simply making loud noises will be enough to scare away a black bear. Jump up and down, wave your arms, and yell or make noise with pots and pans, airhorns, or whistles. If that doesn’t work, throw small rocks at the bear as you shout. This is unlikely to seriously harm the bear, but it will be enough to make it uncomfortable and send the message that it is not welcome.

Or, opt for Ahren’s favorite scare tactic: fireworks. Small firecrackers that make lots of noise are useful tools for convincing a black bear to move along and are less lethal than guns, which are almost always unnecessary as black bears infrequently display aggressive and predatory behavior. But he reserves these mostly for developed campsites, as firecrackers are a wildfire hazard if you’re in a fire-prone area.

Learn from your mistakes

When you’ve successfully ushered a black bear out of your space, don’t just go back to bed or continue on your way. Assess the situation and what might have caused the encounter to begin with. Ask yourself what you did wrong and how you can prevent the bear from coming back, Ahrens says.

That involves learning lessons from irresponsible behavior. For example, did you leave your food in the middle of camp while you hiked down to a water hole? Did you dump food scraps in the fire pit? Throw fruit peels into the woods? These are all things that can encourage black bears to get too comfortable around humans. And when that happens and a bear becomes a regular nuisance—or worse, an aggressive nuisance—rangers may have to euthanize it.

There’s no denying that it’s exciting to see black bears in nature, but they are wild animals and they need their space. Remain cautious when hiking or camping in bear country and do your part to protect yourself and the bears. “You have to respect them,” Ahrens says, matter-of-factly. “They’re bears.”