IBM Transistors Made Of Nanotubes Could Replace Silicon, In Ever-Tinier Computer Chips

Silicon can't keep up with our demand for smaller and faster chips, but IBM researchers may have found a way to continue accelerating chip performance with a whole new kind of transistor. 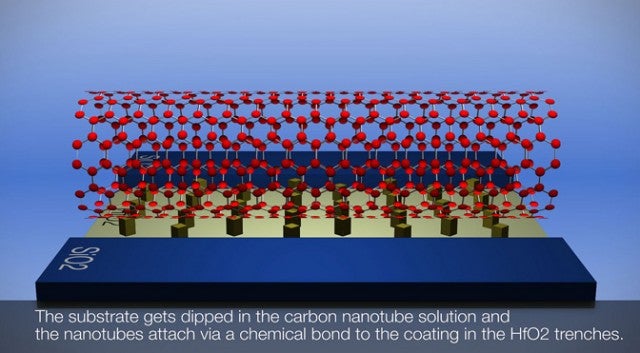 As silicon microchips get smaller and manufacturers pack more and more transistors onto each individual chip, Moore’s Law–the optimistic observation that the microchip industry doubles the number of transistors it can build on a single chip every 12 to 18 months–becomes a little more difficult to maintain. But IBM researchers are reporting a breakthrough in transistor technology that could allow them to further reduce the size of logic gates–the fundamental digital switches on the modern microchip–and therefore continue shrinking microchips for another decade or more, enabling our gadgets to continue growing faster, more powerful, and (hopefully) more efficient.

Logic gates are the tiny switches that actually store and route the digital ones and zeros that make up binary computer code. They are, at a fundamental level, the mechanisms that enable microchips to process information and are the cornerstone of chip performance. The more logic gates you can cram onto a chip, the better speed and capacity the chip is going to have. More speed and more capacity in smaller chips mean electronics can do more with smaller form-factors, and that’s why over the past five decades or so our gadgets have continued to get smaller, faster, and better–a trend we’d like to see continue.

But as these switches approach sizes that can quite literally be measured in terms of atoms, the limitations of physics threatens to get in the way of Moore’s Law, and that’s what makes this IBM breakthrough such a big deal for the industry. Many in the industry can’t foresee chip designers going much further with conventional silicon methods, and the resulting slowdown of Moore’s Law would adversely affect a range of industries that rely on the availability of ever cheaper and faster chips (this includes smartphones, PCs, tablets–basically all of the electronics we simply assume will grow astronomically better with every generation). IBM now thinks it can continue to deliver better chips using carbon nanotube technology to build smaller transistors while also potentially increasing the speed at which the logic gates within them can be switched on and off.

Researchers at IBM’s Yorktown Heights, N.Y., research campus have etched arrays of carbon nanotubes–single sheets of carbon shaped into extremely tiny tubes–onto silicon wafers, coaxing them into extremely small rectangular patterns using a chemical self-assembly process that directs the nanotubes into place. Thus far, they’ve demonstrated chips with 10,000 working transistors and they think they can scale the method to compete with the most densely-packed silicon chips.

As noted above, there are two distinct benefits to this: speed and size. While recent advances in silicon technology have allowed chip makers to continue reducing the size of chips, boosts in clock speed (that’s industry jargon for chip performance) have not kept pace. That means to boost performance, devices need more processing cores to split up tasks in parallel to keep things moving faster. But the IBM researchers believe that by the end of this decade they will be able to use their carbon nanotube method to boost both the number of transistors and the speed with which they can be switched. So if the research holds up, increases in both speed and performance are on the horizon–and our electronics will continue to grow smaller, more powerful, or both.