African Elephant’s Cataract Operation Is The Biggest Eye Surgery Ever

The elephant, Duchess, goes under the knife, with doctors using custom tools for the rare surgery. 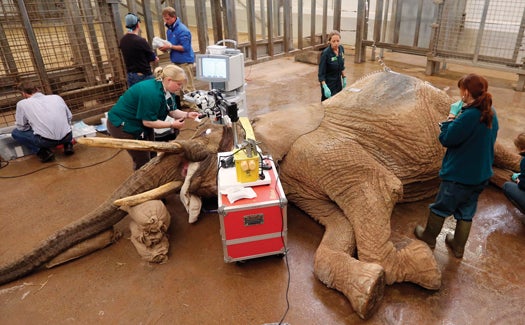 Duchess, a 4.4-ton, 45-year-old African elephant at the Paignton Zoo in Devon, England, had already lost her right eye to glaucoma, and cataracts threatened to blind the other. So in September, veterinarians put Duchess under the knife for the second cataract operation ever performed on an elephant. The surgery was similar to the one that 1.8 million Americans undergo each year.

First, vet Jim Carter made two incisions in the cornea to access the lens. Next he used a machine with a needle that vibrates at an ultrasonic frequency to break up and suck out the diseased tissue. But to operate on one of the largest land animals on Earth, Duchess’s nine-person team needed elephant-sized equipment. Carter ordered custom tools just for the procedure, including a six-inch-long speculum to hold open Duchess’s eyelids and a cataract-removal machine with a needle three times the length of a standard one. After two and a half hours and a few stitches, the procedure was complete. The zoo reports that Duchess is in good health.