A NASA spacecraft is orbiting a tiny asteroid, and that’s a big deal

It’s not easy to just cozy up to a rock barely longer than the Empire State Building. 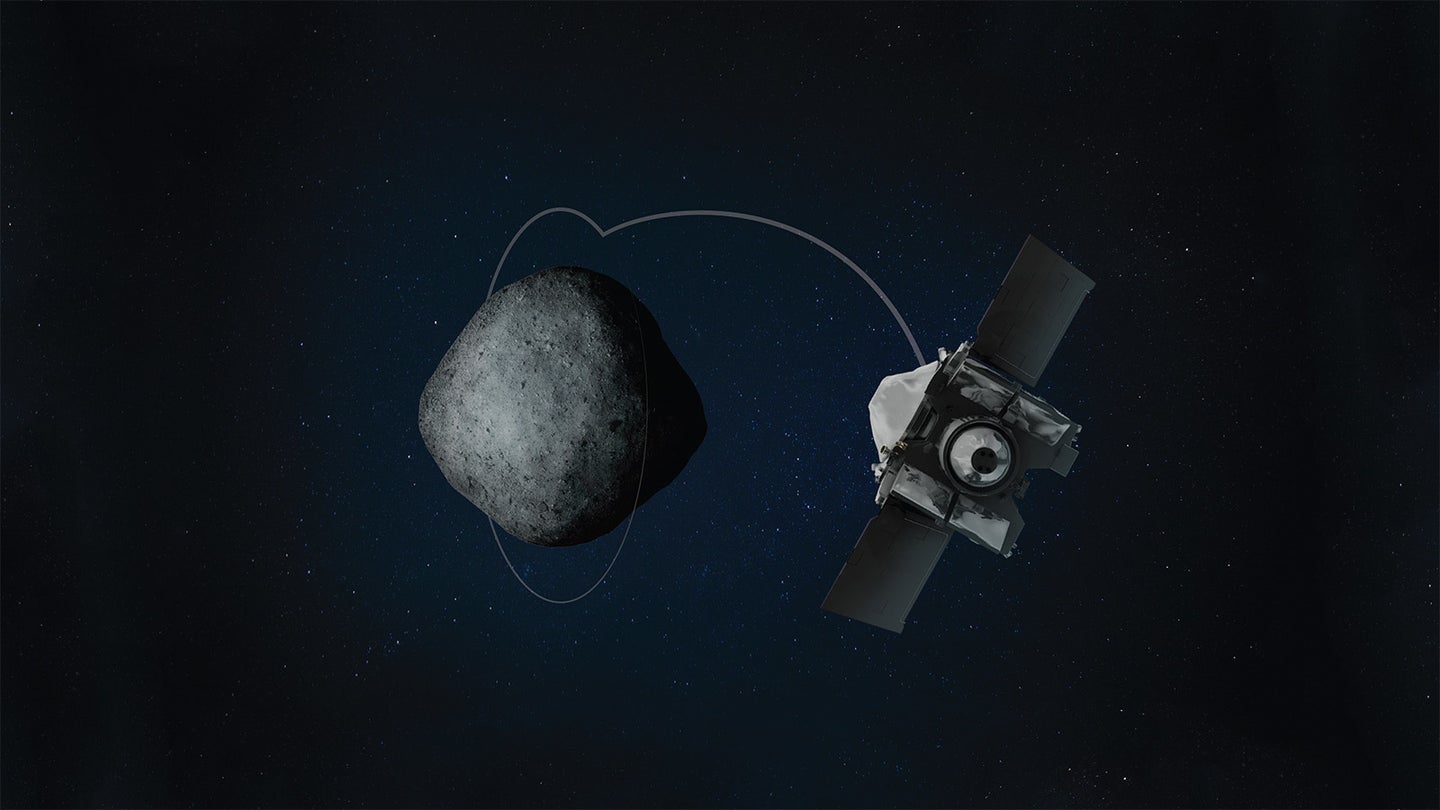 While New Horizons soaked up most of the world’s thirst for space stories over the holiday, there was another success story worth unpacking: NASA’s OSIRIS-REx spacecraft finally entered asteroid Bennu’s orbit, after more than two years of hurtling through space toward the rock. On the afternoon of December 31, about 70 million miles away from Earth, Bennu broke the record for becoming the smallest object in space to have a human-made spacecraft in its orbit.

This was not a routine operation for NASA. Trying to insert a spacecraft into the orbit of an object like Bennu is a fraught process. The team at NASA ended up having to account for a myriad of variables that could have derailed the entire thing.

OSIRIS-REx currently sits in an elliptical orbit about a mile from the center of Bennu, taking 61 hours to complete a full spin. Bennu itself has a diameter of about 0.3 miles, and a mass of about 78 billion kilograms. The bigger the mass, the bigger the gravity—which allows for smaller objects to find their way into a stable orbit around larger objects. Unfortunately for Bennu, its small mass means it possesses 0.000005 times the gravity of Earth, which means it’s relatively easy for any object to simply escape the gravitational field and just keep floating on by into space (or crash into Bennu itself if it’s moving too fast). Yikes.

“[Bennu] is nearing the smallest object that you could possibly get to achieve a stable orbit around a body,” says Jason Leonard, the lead for the orbit determination team for the OSIRIS-REx mission. “[Bennu’s] size played the largest obstacle.” But the asteroid’s size is also why they chose it—because some type of orbit was actually achievable. “Anything else could have allowed the spacecraft to escape [orbit].”

The small size and gravity can often become exacerbated when they interact with other forces at play. For example, the OSIRIS-REx team originally wanted to see if a circular orbit was possible, but as Leonard explains, the team soon realized that pressure created by sunlight combined with the tenuous gravity of Bennu could be enough to start pushing the spacecraft out, creating wobbles and strains in its orbit.

“There were early challenges, before we really knew what Bennu’s shape was, what its mass was, and how it moved, that made for a lot of projected orbits that would wander back and forth,” he says. The team actually didn’t know what Bennu’s mass or gravity field looked like until OSIRIS-REx finally arrived at the asteroid in early December. None of these unknowns created a grave concern that OSIRIS-REx would abruptly fall out of orbit or get slung out into space, but obviously, you can’t really move forward with stable scientific work if you don’t have a stable orbit.

The team’s response was to ensure a “frozen orbit, which kind of takes other perturbing forces into account to help anchor the orbit [of OSIRIS-REx], so none of these other constraints impact it,” says Leonard. Artificial satellites above the Earth often have frozen orbits to minimize the impact of solar pressure, gravity, and spacecraft movement on orbital drift.

Moving forward, the orbit determination team is keeping a keen eye on any influences caused by gravitational forces, mass redistribution on the asteroid, thermal pressures, thruster firings, solar pressure, and other physical factors that could affect how the spacecraft moves around the asteroid. In June, the team will move OSIRIS-REx into a nearer orbit, closer to half-a-mile from the surface.

If something unexpected does happen—which would more likely be an unforeseen problem with the spacecraft’s hardware or software, or an anomaly picked up by the onboard sensors—the team has a built-in safety maneuver to have OSIRIS-REx escape Bennu’s orbit and head toward the sun until the problem can be resolved.

“Everything has gone incredibly well to date,” says Leonard. “Coming in, we had a lot of contingency plans. We were planning for every single possible thing we could think of. None of that came to fruition.” The mass of Bennu was less than predicted, but that had a minimal effect on the orbital insertion plan. “The spacecraft is performing much better than we ever anticipated.”

Many of the techniques designed to pull off an orbital insertion on a small object like Bennu have only arisen in the last decade or so. Some are actually refined based on experience others have had with missions like the European Space Agency’s Rosetta, or Japan Aerospace Exploration Agency’s Hayabusa 1 and 2. Probably the biggest lessons were taken from NASA’s Near Earth Asteroid Rendezvous-Shoemaker mission from the late ’90s and early ’00s, which studied the near-Earth asteroid Eros.

The key difference is that those missions “just didn’t require the precision required to get down to the surface of this small-sized asteroid,” says Leonard. After all, one of the most crucial pieces of the OSIRIS-REx mission is to collect an asteroid sample that can go back to Earth for laboratory study.

There’s a lot in store for OSIRIS-REx and Bennu, and the excitement is only set to build as thing unfold. “The last few months since Bennu first showed up in our cameras as a dot or speck of light, to now as a whole world teaming with boulders and features, have really brought out the enthusiasm of the team,” says Leonard. “We are at the crossroads of engineering and science in deep space exploration.”