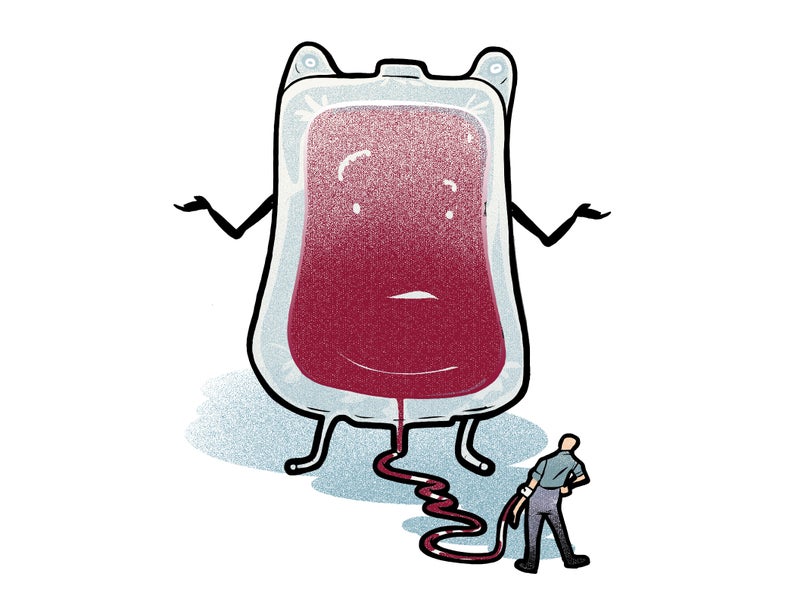 More than 9 million people donate blood every year in the United States, and for good reason. It saves lives and has no proven ill effects on the givers.

Research on these good Samaritans going back to the 1980s has found temporary drops in certain immune cells, such as circulating serum protein and antibodies. But science has never found a lasting impact.

“Blood returns to normal in a few weeks,” says Gustaf Edgren, a hematologist at Karolinska University Hospital in Sweden. “If the body needs more antibodies in the bloodstream, it will produce them extremely quickly.” Edgren, who has studied close to 2 million blood donors, has also determined that they are no more likely than nondonors to develop cancer or die prematurely.

In fact, many donors believe that giving blood makes them healthier—a sentiment that might be a cultural vestige of medical bloodletting in the West.

Though that fell out of favor a century ago, the act of shedding blood to boost health has seen an uptick since the 1980s with the advent of the so-called iron-store hypothesis. This posits that too much iron in the body can increase a person’s risk for cancer and coronary heart disease.

As evidence, adherents point out that women get cancer less often than men, and have lower rates of heart disease—at least until menopause—because they menstruate once a month, which lowers iron levels, and thus would offer natural protection.

Still, there’s no credible evidence that donating blood improves well-being either, though lots of donors persist in believing they gain benefits from it. And that’s OK. “Perception of health is a large fraction of being healthy,” Edgren says. “So that’s a good thing.”