MASCOT had one job, and it did great! 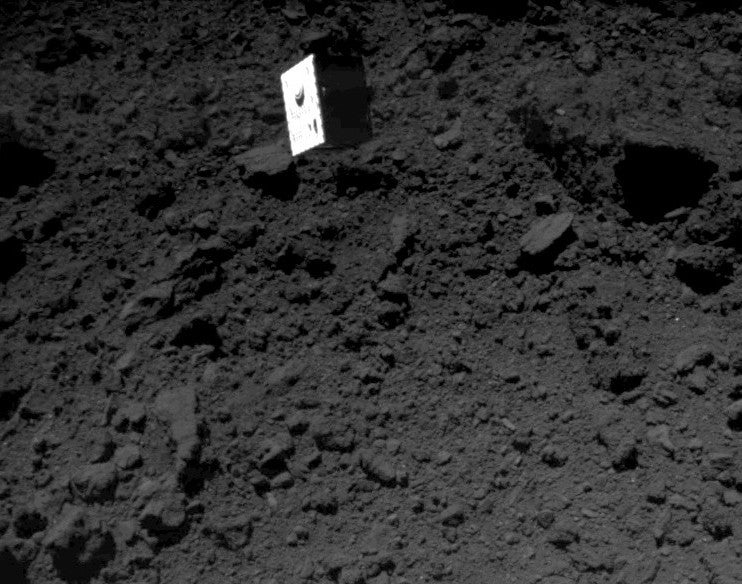 Even a mayfly gets about 24 hours to live before its body runs out of fuel and shuts down. MASCOT, a decidedly dead asteroid-landing robot, got just 17 hours of existence—which was longer than scientists had hoped for.

MASCOT (the Mobile Asteroid Surface Scout) was built by German and French engineers and launched toward the asteroid Ryugu earlier this week, where two other hopping rovers were (and still are!) making their way across the surface.

Hayabusa2 successfully snapped a photograph of @MASCOT2018 as the lander separated from the spacecraft! https://t.co/8K2CMbgMMw/ pic.twitter.com/4QpI3CTks3

Unlike those solar-powered rovers, MASCOT was battery powered, and only carried enough juice to last roughly 16 hours. It managed to push it to 17, gathering information on what the asteroid’s surface is made of. It made three small hops, collecting data at each stop, and—thanks to Ryugu’s rapid rotation—saw three sunsets before saying goodbye.

Researchers in Germany and around the world are already starting to sort through what MASCOT sent home.

“The evaluation of the valuable data has just begun,” MASCOT project manager Tra-Mi Ho [said in a statement]https://www.dlr.de/dlr/en/desktopdefault.aspx/tabid-10975/1755_read-30138/#/gallery/32253/). “We will learn a lot about the past of the Solar System and the importance of near-Earth asteroids like Ryugu.”

Ryugu’s orbit varies widely. As Hayabusa 2 approached the asteroid, Ryugu was about 180 million miles away from Earth. (To put that in perspective, Mars and Earth are 250 million miles away from one another at their furthest point.) But Ryugu isn’t always so distant. As it travels on its oval-shaped trajectory around the Sun, the asteroid gets closer to us, too—close enough to be labeled a Potentially Hazardous Asteroid by the International Astronomical Union’s Minor Planet Center. This does not mean that it poses an imminent danger to Earth. The closest that it will get to us in the next 160 years will be 970,737 miles away, 45 minutes after midnight eastern time on December 5, 2076. That’s about four times the distance to the moon.

In other words, don’t waste your worries on this asteroid. It’s not going to do anything to Earth in your lifetime.

Earthlings, on the other hand, do plan on doing something to the asteroid. In addition to the rovers and MASCOT (RIP), next spring, Hayabusa 2 will send down a projectile to the surface that will blow a six-foot-wide crater. That will look something like this:

Exciting, right? That will help researchers get a better idea of what the asteroid is composed of, beyond the dust and rock on the immediate surface. And Hayabusa-2 will also collect a sample of Ryugu to bring back to Earth, just like its predecessor did in 2010. MASCOT may be dead, but the rest of the mission is just getting started.