FYI: Can Humans Survive In A Completely Self-Sufficient Closed Environment?

Not yet, though we’ve been trying to do so since at least the 1970s. Fabricating an environment that needs no... 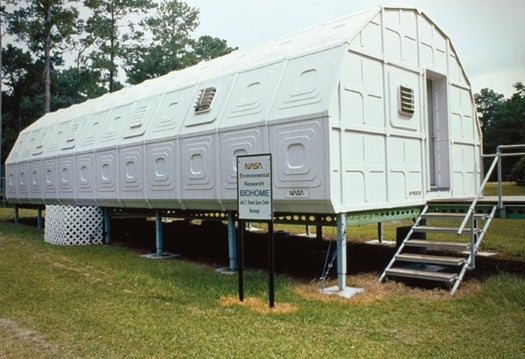 Not yet, though we’ve been trying to do so since at least the 1970s. Fabricating an environment that needs no power other than the sun and is a closed system (where waste gets broken down and reused) is extremely difficult.

One of the first attempts at a CELSS—Controlled Ecological Life Support System—was Bios-3, which was completed by Soviet scientists in Siberia in 1972. The 11,124-square-foot enclosed habitat could support three people. Oxygen was recycled by large pools of algae, and when everything ran right, the system could produce about 85 percent of the air and water its inhabitants required. The longest mission lasted 180 days.

NASA began its BioHome experiment in 1989 in a life-support system about the size of a double-wide trailer. Researchers studied wastewater treatment and the effects of indoor air quality in a synthetic environment and found, not surprisingly, that plants greatly improved the air and made occupants healthier. Biosphere 2, which was launched in 1991 near Tucson, Arizona, was the largest CELSS and is now both a lab and museum.

A new biodome, called the Biotron, opened in Western Ontario in 2007. It was built to test the effects of rising temperatures on ecosystems. The Biotron houses massive 20-foot-high columns, each filled with 22,000 pounds of soil. Researchers subject the dirt to temperatures ranging from –40˚ to 104˚F to better understand the biology of our warming Earth. The Biotron is the first lab that can test climate models in this way, giving scientists a look at the future of this planet–the only working biosphere they know of.

This article appeared in the June 2011 issue of Popular Science_ magazine._