What Will Happen To OSIRIS-REx’s Asteroid Sample?

The journey from Bennu to Earth and the future 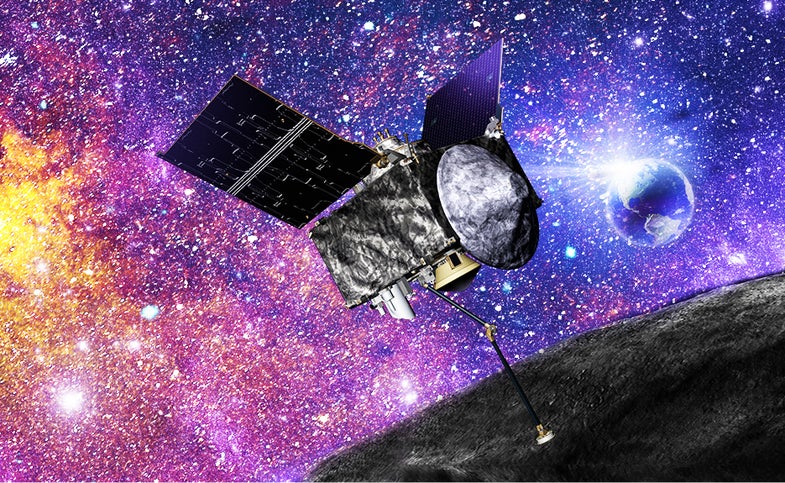 NASA is gearing up to launch its next major mission: OSIRIS-REx. Once the spacecraft blasts off from Cape Canaveral on September 8, it will chase down a carbon-rich near-Earth asteroid named Bennu. OSIRIS’ goal: to return the largest sample of an asteroid ever collected.

“Sample return is the future of space exploration,” explains Dante Lauretta, OSIRIS-REx principal investigator. “One tiny grain of comet or asteroid is like a whole universe.”

OSIRIS-REx’s special delivery will help to answer some of the biggest questions in science—like where do we come from? Asteroids like Bennu are the leftover bits from the dawn of the Solar System. Essentially cosmic time capsules, asteroids harbor the secrets of planet formation and the origin of life.

After arriving at Bennu in late 2018, the spacecraft will spend up to 2 years mapping and studying the asteroid’s surface, before closing in for the main event in 2020: collecting the sample.

Using a specially designed robotic arm called the TAGSAM (Touch and Go Sample Acquisition Mechanism), the spacecraft will collect anywhere from 60 grams (2 ounces) to 2 kilograms (4.5 pounds) of surface material. At the end of the arm is essentially a space vacuum cleaner, which will blast the surface with nitrogen gas and suck up the resulting projectiles.

According to Christina Richey, NASA’s deputy program scientist, the encounter will be like a smooth, gentle high-five. OSIRIS-REx will not actually land on Bennu, but instead, merely touch the surface, collecting the sample it needs.

“It’s a very safe way (if such a thing exists) to retrieve a sample from an asteroid,” explains Rich Kuhns, Lockheed Martin’s OSIRIS-REx project manager. “Since you just have to be in contact with the asteroid, the technology allows us to collect our sample in only 3 to 5 seconds.”

The spacecraft has plenty of time and enough gas for three attempts, so once the team is satisfied a large enough sample has been collected, the collection head—resembling the air filter on a ‘57 Chevy carburetor—will be loaded into the muffin-shaped sample return capsule.

Due to orbital alignments, OSIRIS-REx won’t be able to leave Bennu before 2021. Two years later, in 2023, the capsule will touch down under parachute in Utah.

Immediately after landing, the capsule will be transported to Johnson Space Center’s sample curation department. Once the sample head has been safely removed from the capsule, the science team will perform immediate analysis of some sample particles. “We won’t be able to wait,” Lauretta says. “We will probably feed some of it into the electron microscope right there at NASA to get our first glimpse of Bennu.”

Over the following six months, the science team will produce a detailed catalogue of everything that was brought back. This catalogue will then be released to the greater scientific community.

“This will not only benefit current scientists but future generations of scientists as well,” Richey explains. “Sample return is going to be the gift that keeps on giving.”

NASA’s portion will be divided up even further, with roughly 5 percent stored at NASA’s facility in White Sands, New Mexico, as insurance, in case something happens to the lab at Johnson Space Center. Another 4 percent will be shipped to the Canadian Space Agency as payment for a laser altimeter the spacecraft will use to map Bennu’s surface, and finally, the Japanese Space Agency will receive one-half percent.

The rest will be “set aside for future researchers for the science questions we haven’t figured out to even ask yet, and the science laboratory instruments that we haven’t even developed yet,” said OSIRIS REx program executive Gordon Johnston during a recent press conference.

NASA’s portion will be stored and handled in special cabinets to ensure the samples remain pristine. Kevin Righter, curator (aka the keeper of the samples) at the sample curation lab, explained how interested scientists will be able to submit a request to study samples of Bennu. Requests will be evaluated twice a year by a NASA panel and, if approved, the curation team would then prepare a sample to send out.

Samples come in a variety of forms, depending on the science goals. For instance, a sample could be dissolved in solution and evaporated out for testing. “In cases where the sample is destroyed or dissolved, we do not take it back,” Righter explains. “If the technique is not destructive and is still useful to a future study then we take it back, and store it in a different part of the lab.”

Samples are also available in the form of a thin section—a 30-micron-thick slice of a rock adhered to a glass slide, and studied under a microscope. Righter explained that the lab keeps a large selection of thin sections on hand, and each one can be studied multiple times.

“It’s pretty amazing when you see a section of a lunar sample that’s been allocated to 6 or 7 different scientists and they’ve all made really exciting discoveries on the one little section,” says Righter.

He says the work at the lab is an investment in our future. “The scientific value is always increasing, just like our collection.”

Asteroids like Bennu may have transported water and organic material to Earth and other planetary bodies early on in the solar system’s history. By analyzing samples of Bennu, not only will we better understand how our stellar neighborhood formed, but maybe even how life began.