Benjamin Franklin Once Electrocuted Some Turkeys For Science 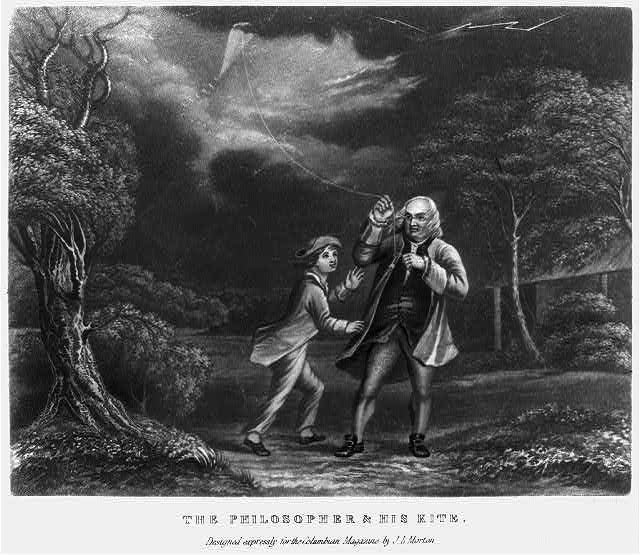 Benjamin Franklin’s famous kite-flying experiment, conducted in 1752, was not his first study with electricity. Before that, he tested electric shocks on some farmyard birds. As he wrote to botanist Peter Collinson in a letter dated 1749, “A Turky is to be killed for our Dinners by the Electrical Shock; and roasted by the electrical Jack, before a Fire kindled by the Electrified Bottle . . . .”

In 1751, scientist William Watson published a report including the results of the electrified dinner. Franklin used six-gallon Leyden jars to store and discharge electricity upon hens and turkeys. Unfortunately, he did not entirely kill the turkeys, at first. “The turkies, though thrown into violent convulsions and then lying as dead for some minutes, would recover in less than a quarter of an hour,” Watson wrote. Another shock did kill the 10-pound birds. “[Franklin] conceited, as himself says, that the birds killed in this manner eat uncommonly tender.”

A Turky is to be killed for our Dinners by the Electrical Shock; and roasted by the electrical Jack

Franklin also accidentally electrocuted himself that day, receiving a shock nearly as large as the one that killed his hens. He described the experience in a letter dated 1750:

He stayed sore for a week.

Franklin’s work, including several experiments besides the turkey one, was a boon to science, Watson concluded in his report, which the journal Philosophical Transactions of the Royal Society A published. “Upon the whole, Mr. Franklin appears in the work before us to be a very able and ingenious man,” Watson, a fellow of the Royal Society, wrote. He continued: