Shouldn’t We Have Been Able To See This Huge Meteor Coming?

Space rocks are typically tiny and dark. Even if we could spot them, it wouldn't be until they were already upon us, and by then it's too late. 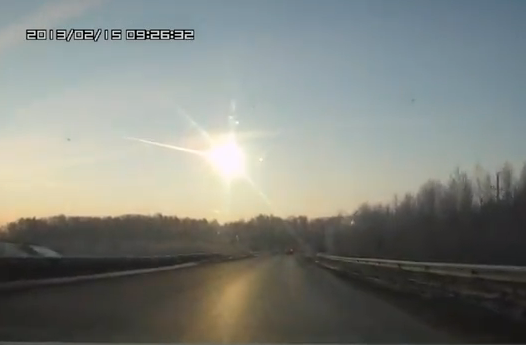 Friday morning’s meteor, the largest object to strike Earth in more than a century, took the whole planet by surprise. But maybe it didn’t have to.

There’s a chance the space rock that careened into Earth’s atmosphere over Russia could have been spotted if the right telescope happened to be looking in the right place. That’s happened exactly once before. But it’s highly unlikely it could have been spotted in enough time to sound an alarm–at least not with our planet’s existing warning systems.

International scientists say it’s unrelated to the asteroid 2012 DA14, which flew past Earth today. That rock was found in a ground-based sky survey, but at roughly half a football stadium in width, it is much larger than the meteorite.

2012 DA14 was hard enough to find, but the chances of spotting something like this morning’s meteorite are really dismal, said Laurie Leshin, dean of science at Rensselaer Polytechnic Institute and former research director of the Center for Meteorite Studies at Arizona State University.

“The rocks themselves tend to be very dark. Most meteorites reflect only a couple percent of the light that hits them,” she said. “A lot of them are filled with carbonaceous materials, like coal, basically, so they can be very black.”

The unnamed rock packed a gigantic 300-500 kiloton punch when it exploded in the air, blowing out windows, damaging hundreds of buildings and injuring at least 1,200 people. That’s a good 20 times the power of the atomic bomb dropped on Hiroshima. The rock was probably about 50 feet in diameter, an estimate derived from two infrasound stations near the impact, according to Peter Jenniskens, a SETI Institute scientist and principal investigator of the Cameras for Allsky Meteor Surveillance at NASA’s Ames Research Center. He said that although small, this space rock could have been seen, at least in principle.

“This asteroid could have been detected if we would have been searching for it,” he said. “It was not, as far as I know, seen coming in, and there was no prediction that this could happen. But that could have a lot to do with the fact that a survey, at any given time, only covers a small area of sky.”

There is one example in the scientific record of an incoming meteorite being discovered before impacting Earth. In the middle of the night between Oct. 5 and Oct. 6, 2008, Richard Kowalski was manning a 1.5-meter telescope belonging to the Catalina Sky Survey near Tucson, Ariz., when he spotted an object ultimately named 2008 TC3. This space rock was only 7 to 16 feet in diameter, much smaller than the one that hit Russia today, and incredibly faint–a magnitude 19 object. His observation came 20 hours before the rock exploded an estimated 23 miles above Sudan’s Nubian Desert. The explosion created a 1.2 kiloton shock wave, Jenniskens said.

“(Friday’s explosion) was 300 times bigger,” he noted. “We could have seen it. It is quite possible that it did go through someone’s survey field, or maybe an amateur’s telescope.” Astronomers will no doubt be combing their records from the past couple of days–probably the earliest it would have been seen–to check if anything crops up.

Randy Korotev, a meteorite expert at Washington University in St. Louis, said many meteorites are agglomerations of non-reflective material that are too tiny to reflect much light. This helps explain why they disintegrate when they enter Earth’s atmosphere–they’re crumbly.

“When these things hit the atmosphere, from the point of view of the meteorite, it’s like hitting concrete. It compresses the air so fast,” he said. “Most meteorites can’t stand the internal shock themselves. That’s why, toward the end, they typically fall apart.”

The overwhelming majority of the time, that’s how meteors become visible–by turning into a literal fireball, in Leshin’s words. “They are glowing from fire, because they are going so fast when they come through our atmosphere,” said Leshin. That’s true right at their surfaces, she added–inside, meteorites are still ice cold.

Philipp Heck, assistant curator of Meteoritics and Polar Studies at the Field Museum of Natural History in Chicago, said a denser network of small ground-based telescopes and sensitive cameras could theoretically detect a small asteroid like the one that became today’s meteor. Or an infrared telescope, which can detect very small items, might be able to spot them.

“A combination of both makes sense. Now, after today, I think people will be more aware of the threats that exist,” he said.