When Bacon Flew to the Moon; or, #spacebacon

A lot of things about the Apollo missions weren’t particularly glamorous, like the cramped space and the lack of privacy... 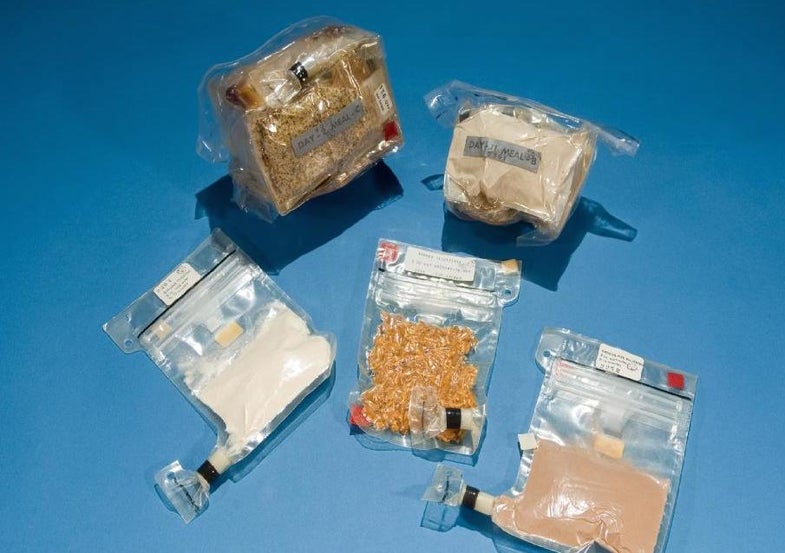 A lot of things about the Apollo missions weren’t particularly glamorous, like the cramped space and the lack of privacy when doing things like using the rudimentary fecal containment system. Meals were another unglamorous aspect of lunar missions. The food was freeze-dried and eaten as-is or was dehydrated and reconstituted with water in the spacecraft. In either case, all meals were planned in advance; astronauts didn’t have a lot of choice when it came time to eat. But one staple on all Apollo missions would probably be as appreciated now as it was then: bacon.

The list of considerations when developing Apollo meals was impressive. From a biological standpoint, things like nutrition, calorie count, nutrient balance, absorption, and astronaut personal preference were taken into account. From a more practical standpoint, what the food weighed, how long it would take to prepare, and even its temperature and humidity were things to think about before launch.

In short, meals on Apollo had to keep the astronauts happy, healthy, and had to not gum up the spacecraft if they floated around. Before each mission, astronauts got to pick their favourite foods, and their choices were then assembled into roughly 2,500 calorie, nutritionally balanced meals. There were four different meals for each breakfast, lunch, and dinner, and the mission schedule cycled through them in sequence, so meals were repeated during a flight. And one staple throughout the program was bacon. Or, more specifically, bacon cubes. 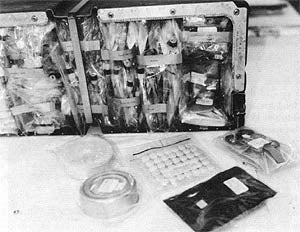 The first manned Apollo mission, Apollo 7, had the least variety in its meals. But bacon was a key food in three out of four breakfasts. The astronauts’ first meal on days 1, 5, and 9 of the flight consisted of peaches, eight bacon squares, cinnamon toasted bread cubes, and breakfast drink. Breakfast on days 4 and 8 were with Canadian Bacon and applesauce, strawberry cereal cubes, cinnamon toasted bread cubes, and more breakfast drink. Only days 3, 7, and 11 were bacon free.

And, it seems, the crew liked the bacon squares. Towards the end of the eleven-day mission, Walt Cunningham commented to Capcom Bill Pogue during breakfast that “Happiness is a package of bacon squares on day 10.” Bacon squares may have been a hit, but on the whole the crew came home feeling like they’d brought too much food that was too sweet.

The next mission, Apollo 8, had bacon as a staple in every breakfast; each day started with either eight bacon squares or a serving of Canadian bacon with applesauce. And they loved it. On day two of the flight, Jim Lovell made a comment to mission control that echoed Cunningham’s feeling on the salted meat: “Happiness is bacon squares for breakfast.” The capcom on duty replied, “if you don’t eat them all, bring them back, and we’ll polish them off here.” The crew found the food on history’s first manned lunar mission to be quite bland, save the bacon squares and the one wet meal they had specially packed for Christmas dinner.

Apollo 9 continued the trend of bacon in space, and was the first mission to see bacon featured in meals other than breakfast. The crew had bacon squares in three out of four breakfasts, as part of lunch on days 4 and 8, and as part of their dinner on days 2, 6, and 10. Apollo 9 was also the first mission to see bacon eaten inside a lunar module; the mission was first and foremost a shakedown flight of the lunar module in Earth orbit.

Unlike the main spacecraft, the command module, the lunar module had no hot water so meal were a little more on the bland side. But there was still bacon. The third meal planned for the lunar module astronauts, in this case Jim McDivitt and Rusty Schweickart, included eight bacon squares per astronaut. 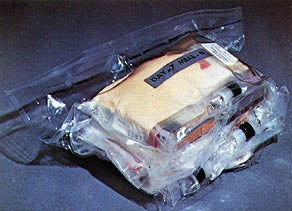 Meals started to get a little more interesting with Apollo 10. This crew on this flight had more than 60 foods to choose from, including some wet-packed meals like the Apollo 8 astronauts had for Christmas. This crew had less bacon, but still ate bacon. Each man had eight bacon squares with each breakfast, in the command module as well as in the lunar module.

Apollo 11 had even more selection than Apollo 10 did with more than 70 food items to choose from including wet-pack and spoon-bowl foods. Neil Armstrong had eight bacon squares with two out of four breakfasts and Canadian bacon and applesauce for one; the fourth was bacon-free. His crewmates each swapped the bacon squares for sausage patties for one breakfast. But there were bacon snacks on this flight. Three servings of Canadian bacon and applesauce and 12 servings of eight bacon cubes were stored in the snack pantry, a handy “cupboard” from which astronauts could grab something to nibble on without digging out the meal packs.

Apollo 11 was also, of course, the first mission to land on the Moon. And there was bacon involved in this as well; bacon cubes were among the meals stored in the lunar module. And it worked out that meal A, the first scheduled meal to be eaten on the Moon, consisted of bacon squares, peaches, sugar cookie cubes, pineapple grapefruit drink and coffee. They ate history’s first meal on Moon slightly ahead of schedule after landing at the Sea of Tranquility.

The next landing, Apollo 12, also had a fair bit of bacon on board. Typical crew meals had bacon squares with two out of four breakfasts and Canadian bacon and applesauce with a third. The remaining breakfast had sausage patties. One hundred and one hours into the mission, the crew was on the far side of the Moon discussing the upcoming lunar landing attempt when Pete Conrad’s bacon got away from him. “What happened to my bacon? I guess it got away.”

Apollo 13 also had about 70 different food items from which to build meals, and again bacon squares were featured in two breakfasts and Canadian bacon with applesauce featured in the other two. Apollo 14 had more or less the same food as the previous missions with some interesting additions like lobster bisque and peach ambrosia. Neither of these crews mentioned much about bacon in flight. 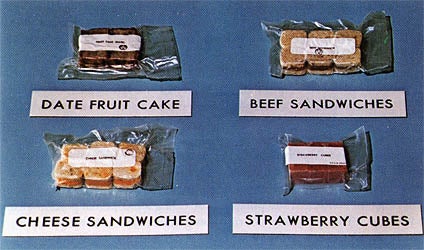 The crew of Apollo 15 didn’t seem to like the bacon squares as much as their colleagues. This crew had about 100 food items to choose from in building their meals, including bacon squares. At one point, Jim Irwin and Dave Scott both offered some of their bacon squares to Al Worden who refused; he found them too dry and salty. Later, Irwin offered Scott some bacon squares as a snack; he chose coffee instead. Later, while the crew was preparing for Earth reentry, Worden made mention of throwing out the bacon squares. Their snack pantry was also empty towards the end of the flight save the uneaten bacon squares.

Apollos 16 and 17 had the largest selection of foods to choose from, and bacon started playing a smaller role. Bacon squares were included in two out of four breakfasts on these last two lunar landing missions. On Apollo 16, bacon was part of two lunches and Apollo 17 it was featured in one. Both missions also had servings of eight bacon squares in the snack pantry; six on the former mission and nine on the latter. On both flights, astronauts didn’t sing bacon’s praises like they did on Apollos 7 and 8. Mentions of bacon are limited to what the crew was eating at a given time.

The bacon squares that were a staple on Apollo missions actually predate the lunar program; they debuted during Gemini mission where they were a breakfast staple. And bacon squares lived on after Apollo. In the 1990s, NASA astronauts also had bacon squares as part of their meal options. A meal plan from 2002, however, had a distinct lack of bacon. Today on the ISS, the closest thing astronauts have is a freeze-dried sausage pattie they rehydrate with hot water.