PopSci Q&A: How Much Do Presidential Debates Matter?

And what do voters really care about? The authors of "Democracy Despite Itself: Why a System That Shouldn't Work At All Works So Well" weigh in. 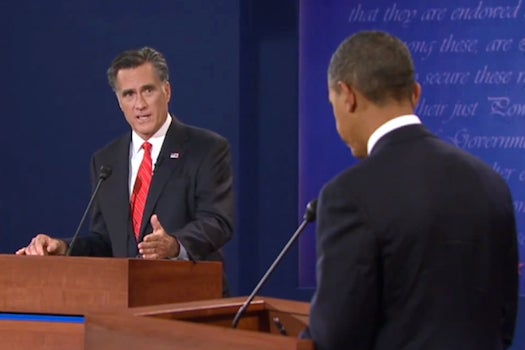 With one presidential debate down and the second gearing up for tonight, we’ve been wondering: Do debates actually matter in an election, and if so, which aspects do voters care about? We’ve explored some of the influences technology has on our impressions of a debate–“Is HDTV going to sway your opinion?”. Here, we email with Danny Oppenheimer, associate professor of psychology and public policy at Princeton University, and Mike Edwards, founder and contributor to Leftfielder.org, on the issues, both big and small, that determine how we perceive a debate–and whether they have any impact on how we vote. The pair authored the recent book “Democracy Despite Itself: Why a System That Shouldn’t Work At All Works So Well” (MIT Press).

Being actually knowledgeable about the issues doesn’t matter at all.

PopSci: My overarching question is: What really matters to voters in a debate? Is it the issues or the minutiae–the way their hair looks, what they’re wearing.

Edwards and Oppenheimer: When it comes to who a person will vote for, there are a number of factors affecting the popular perception of the candidates’ likability, competency, and empathy, which voters derive initially from a first impression (which, like any first impression, is largely based on appearance), and then get modified over time throughout the campaigns. By the time of the debates, however, most voters will have already had their first impression of the candidate; they know what the candidates look like and sound like, what party they represent, etc. Within that context, the debates serve two functions:

1.) Allow for direct comparison between the candidates–literally, this is the only time the candidates will stand next to each other during the course of the campaign, and that can be instructive. For instance, I’m not sure that most Americans appreciated how much taller Obama was than McCain until they debated each other in 2008. (Romney and Obama are only an inch apart in height, so that won’t matter so much this year.)

PS Is there even a point where it stops mattering, or does every controllable detail add up?:

PS: Is it more important for a candidate to be well-versed on issues, or to be a person who presents what they say in the right way (the right soundbites, the right “zingers”)?

E&O: Being actually knowledgeable about the issues doesn’t matter at all, unfortunately. What matters is that they sound like they are knowledgeable about the issues: don’t say “um,” don’t equivocate, don’t veer too far from conventional wisdom, don’t give complex answers. As for zingers–they can be very effective, if they underscore an opponent’s perceived weakness, although one must be careful with them too–zingers frequently backfire and make the person who said them look mean or petty, especially when they are aimed at someone who the audience is predisposed to like.

PS: What about the effect of the media? I’ve seen some studies (like this one) suggest that how the results are presented post-debate is the most important thing.

E&O: Certainly human beings are social creatures, and it would be wrong to assume that we make any decision in a vacuum. The media is perfectly capable of affecting the course of how voters perceive any event, including presidential debates. But keep in mind that your views of an event can also be affected by your spouse, your friends, your neighbors, your co-workers, your family, the guy talking too loudly at the next table at Starbucks, etc. And of course Brian Williams, Diane Sawyer, and Bill O’Reilly are having their own views shaped in exactly the same ways.

All of which is to say that while the media certainly matters, we don’t really know how much of an impact they have on voter opinion independent of all of the other factors which are constantly affecting us.

PS: How much does it really matter? It seems like I’ve seen conflicting reports on how much voters can be swayed by debate results, but there’s at least something there, whatever the reason for it, right?