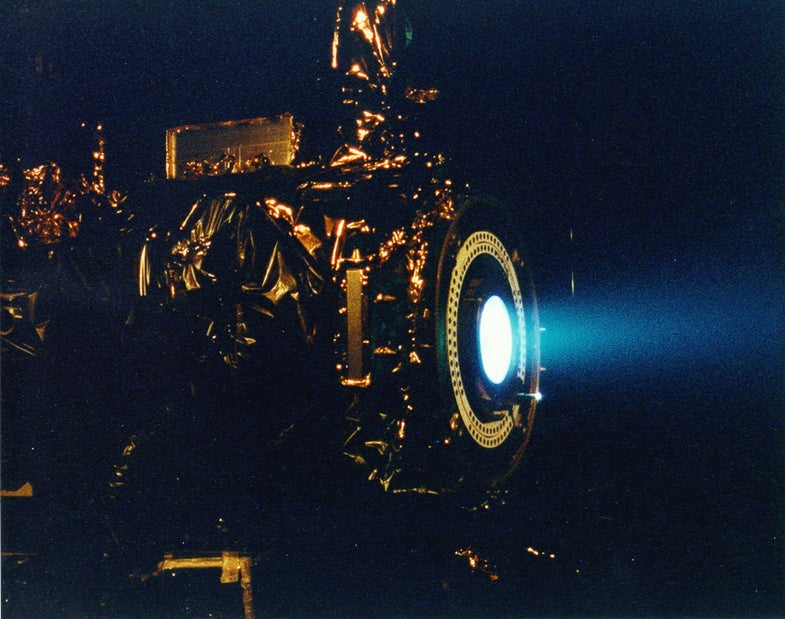 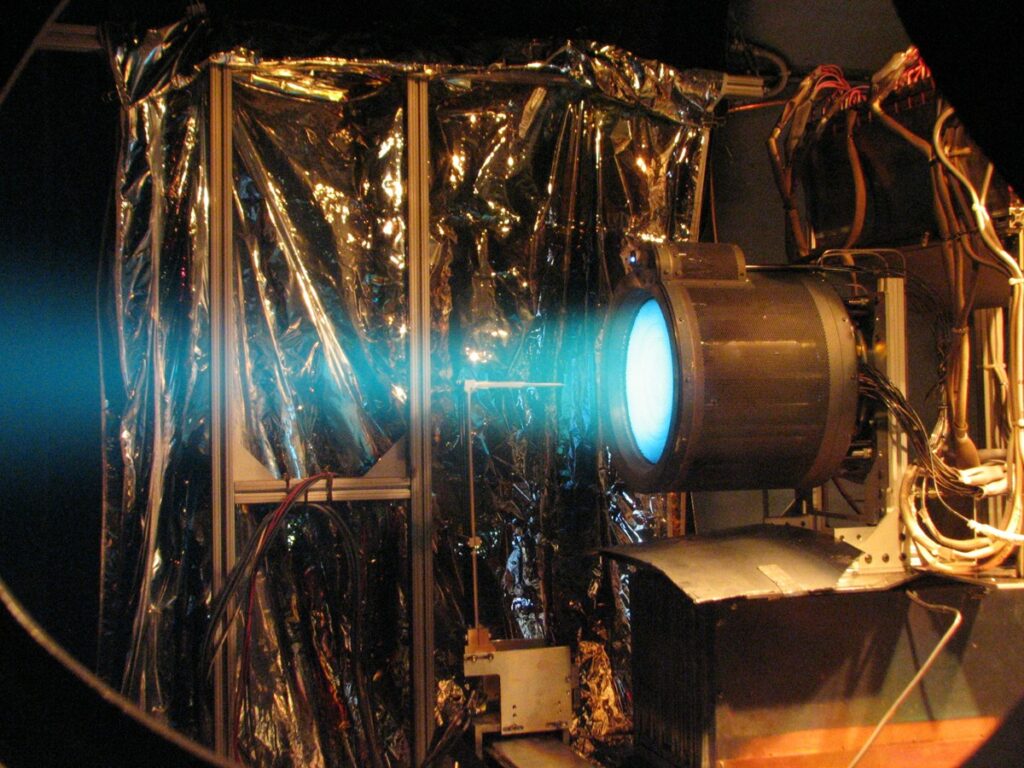 In early March, NASA’s Dawn spacecraft will enter the orbit of the dwarf planet Ceres. “We’re going to see a whole new world,” says Marc Rayman, Dawn’s chief engineer and mission director. Eight years since its launch, and four years after visiting the second-largest object in the asteroid belt, Vesta, Dawn will be the first spacecraft to orbit two alien protoplanets in a single mission.

That achievement is made possible by its ion engines, which are about one foot in diameter. Inside each engine, xenon atoms are bombarded with electrons to form ions. Metal grids at the back of each engine are charged to about 1,000 volts and shoot out the ions at up to 90,000 miles per hour. The thrust is minuscule. (To approximate the pressure the engines exert on Dawn, take a sheet of paper and place on it on your palm. That’s it!) But in a zero-gravity, frictionless environment, the effect of this thrust gradually builds up. At its fastest, Dawn can move at about 24,000 miles per hour. And because the ions move at such a high velocity, the engines need less propellant, making them 10 times more efficient than conventional chemical fuels. 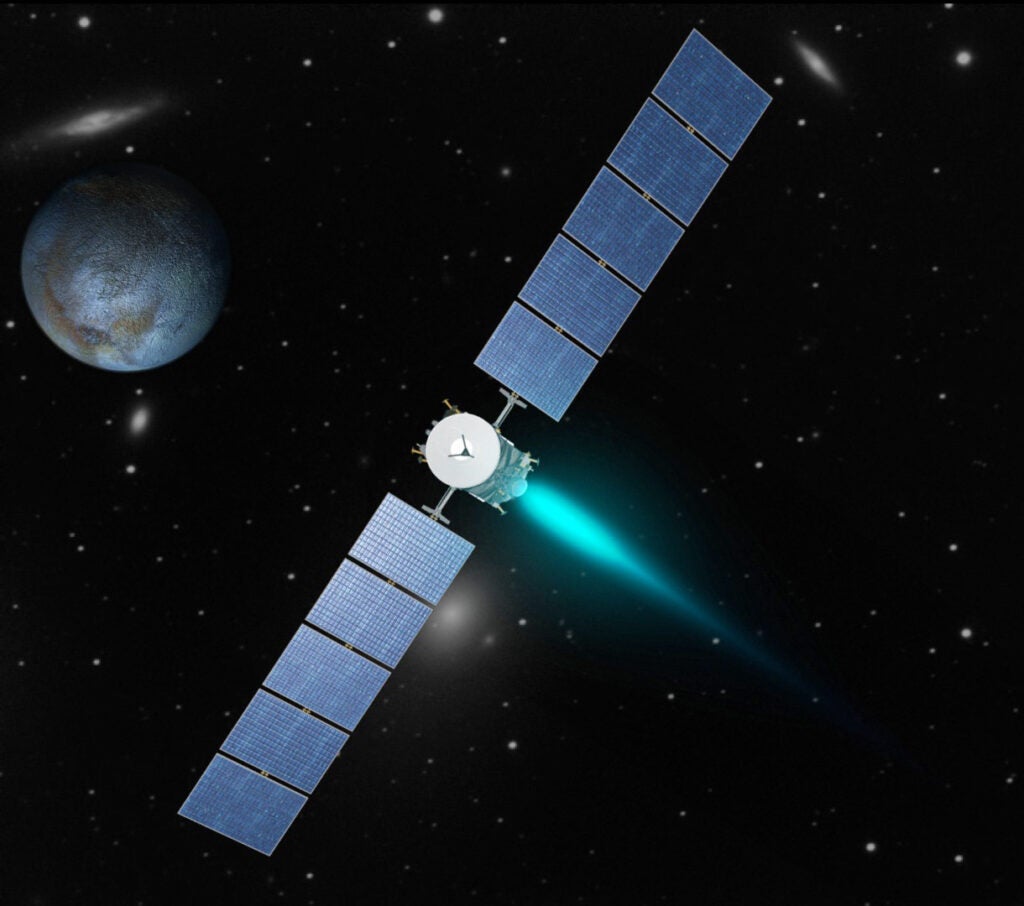 If this all seems like something you’d see in a movie, it’s probably because you already have. In Star Wars, Darth Vader’s TIE fighter is a hot rod that uses ion engines to speed through the Galactic Empire. Just like Darth Vader’s vehicle of choice, Dawn uses solar energy to feed electrons into its power-hungry engines. Each of the two solar panels is 27 feet, or the width of a singles tennis court. Unlike chemical fuels, which have to be stored in the spacecraft, these panels supply an almost inexhaustible source of energy.

Because of its unprecedented efficient use of resources, ion propulsion enables far-reaching, lengthy missions that would otherwise overwhelm NASA’s budget or “even be truly impossible,” Rayman says. Spacecraft can now travel to more than one object, because with continuous thrusts, ion propulsion also allows spacecraft to more easily and steadily go into orbit of various objects, without burning all their fuel.

“It’s taking over the industry.”

“It’s like off-roading,” says Jim Green, director of NASA’s planetary science division. “All the planets are on well-established orbits, or roads. With ion engines, you don’t have to follow the road. You can just take off and use shortcuts that will get you to a variety of locations that are up to about five astronomical units, which goes out to Jupiter.”

Ion propulsion has even furthered the possibilities of human space exploration. In future missions, it could be used to send supplies back and forth to astronauts on Mars or other distant locations.

However, ion-powered engines are only useful for certain kinds of space missions. For transporting humans to other worlds, it is too slow. It would take Dawn four days to accelerate from zero to 60 miles per hour. Designed for patient missions, ion thrusters are too costly and complex for straightforward missions to destinations such as Mars or Venus, Rayman says. 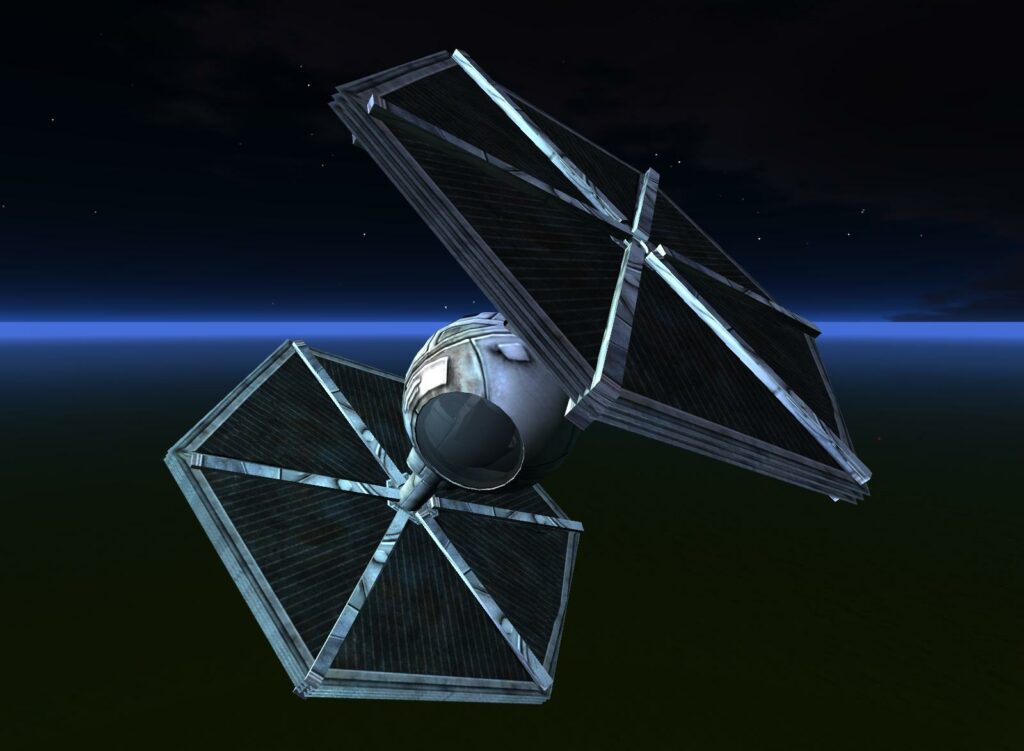 “TIE” stands for Twin Ion Engines—the same kind of propulsion technology the Dawn spacecraft uses. However, Dawn does not fight for the Galactic Empire, as far as we know.

The use of electric engine systems in space is over a century in the making. Robert Goddard, an American rocket pioneer, first mentioned the idea of electric propulsion in 1906. He carried out experiments about a decade later, but working ion thrusters didn’t appear at NASA until the 1960s when researchers conducted suborbital tests. Finally, Deep Space 1 launched in 1998 and demonstrated that ion propulsion works on spacecraft. Although DS1 was originally intended to test out 12 experimental technologies, thanks to its ion thrusters, it went on to complete successful flybys of the asteroid 9969 Braille and Comet Borrelly, returning the best cometary images and data that mankind had ever seen at the time. Dawn, which launched in 2007, is the first pure science mission to use the technology.

Commercial satellites have been using ion thrusters since 1979. So why did it take so long for scientists to put them on a spacecraft? It may have been because there was no large-scale purpose for such niche technology until now. “We don’t develop technologies just to develop technology,” Green says. “It’s really all about the kind of science we want to do, and which technologies are nearly ready.”

A stepping stone to Mars

Now, it seems, the world is ready to put ion propulsion to work in space exploration. NASA’s Asteroid Redirect Mission will be the first to move a near-Earth asteroid to a stable orbit around the Moon. The spacecraft will reach a yet-to-be-determined asteroid using ion propulsion, capture it in a bag, de-spin it using chemical propulsion, and finally, guide it back to the Moon’s orbit. The mission would be unaffordable with regular fuel. “The only technology that can do it is high-power solar-electric propulsion,” Brophy says. “We know it works at the scale of Dawn, and what we need is a much higher power system for Mars. The Asteroid Redirect Mission is in the middle as a good stepping stone to get there.”