People with the disease have found new ways to modify their gear, and their own metabolisms 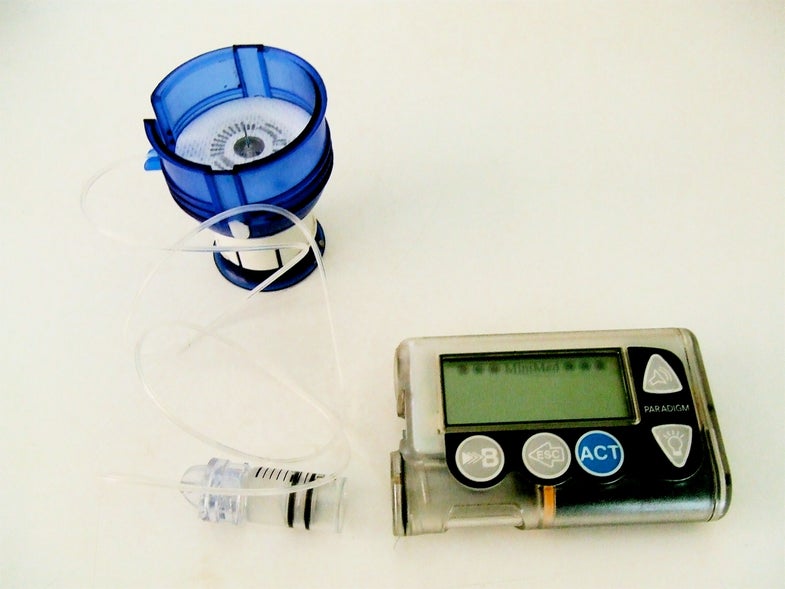 Emma Black was diagnosed with Type 1 diabetes in late 2014. Because diabetics’ bodies don’t produce insulin, they need to be constantly aware of a lot of different numbers: their carbohydrate intake, their sugar levels, how much insulin they need to inject to break that sugar down.

High sugar levels over time can cause complications like heart disease, kidney failure, blindness, or circulatory problems that result in amputation; in the short term, sugar levels that are extremely high or low can put a person into a diabetic coma, which could be fatal if it’s not properly treated.

Black couldn’t believe how inconvenient it was to check her glucose levels—it involves carrying around a bulky device and plugging it in to a computer to see the data elsewhere, Black, then known as Stephen, writes in a blog post from early 2015. “If a loved one wanted to check in to see if I was doing all right, they would need to call me and hope I answered,” she wrote.

This seemed anachronistic in the wireless age.

So Black started a project called DexDrip, which would link a glucose meter to a cell phone via Bluetooth (the software is now called xDrip and it’s maintained by another group of diabetes hackers called Nightscout). In the process, Black discovered a thriving online community of well-intentioned hackers. “Some are working in groups, others are working alone, but all share the same goal of making lives for people with diabetes easier, better, and (although they are taking personal risks) safer,” Black wrote.

Diabetes is a particularly difficult condition to maintain. It’s chronic—”you never get a break” one diabetic told me—and everything you do affects it, whether it’s what you eat or how much exercise you’ve been getting or if you didn’t sleep enough the night before. The tools for managing it have improved a lot in recent years—last month, the U.S. Food and Drug Administration (FDA) approved the first closed-loop system to automatically administer insulin to Type 1 diabetes patients based on readings from their glucose meters.

Patients have been clamoring for years to have access to a device that can inject insulin to the body as needed, like the one just approved. It isn’t the first system of this type, nor will it be the last, says Christopher Wilson, a systems administrator in Silicon Valley who was diagnosed with diabetes 18 years ago—he remembers first hearing about these sorts of systems as far back as the 1970s, and they are only now starting to become commercially available.

The FDA is understandably cautious about these sorts of devices. Since each body acts a little differently, a closed-loop system might not work well for everyone, and if it malfunctions, the consequences could be dire. “If I were to put [a closed-loop system] on my body, I would watch it like a hawk because it’s my life it’s messing with,” says Brian McKee, an electrical engineer with Type 1 diabetes.

But many diabetics have been thinking creatively about how to best use the available tools for years before that. Many diabetics find themselves with few affordable options that truly make their lives better, and with little support in learning how to use them. Now thanks to online communities, diabetics are finding others with which to share best practices, from the best diet to hardware and software hacks. 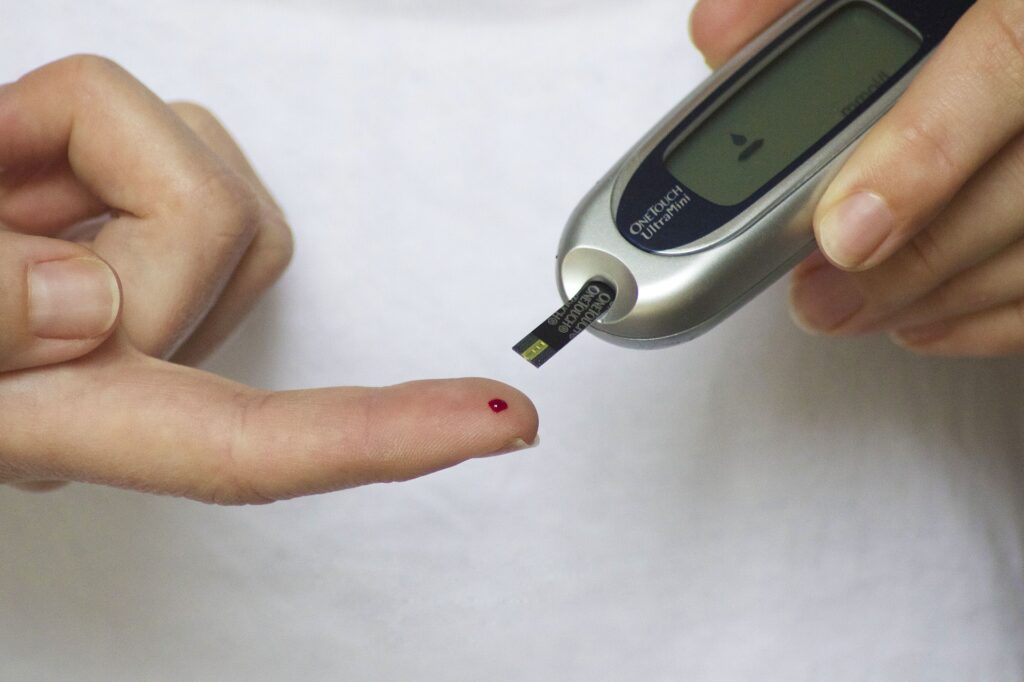 Some diabetics check their glucose by drawing blood from their fingers.

Reddit is one of the most supportive online communities for diabetics. The subreddit r/diabetes has over 15,000 subscribers, who log on to swap tips about how to choose an appropriate dose of insulin with certain types of foods, or which types of technology to use to do so, as well as the occasional clever hack or two.

“The internet community in general is pretty harsh. I think it’s different with r/diabetes,” says Katie Donaldson, a Type 1 diabetic diagnosed when she was 12 and now works tech support in Utah. The r/diabetes members I spoke to feel the community is necessary because they’re not getting much support from their doctors, who they are supposed to see every three months. Doctors and nutritionists tell patients the basics, but everyone responds a little differently to insulin and to different foods. As a result, patients undergo a lot of trial and error until they find a rhythm that works for them, Donaldson says.

Sometimes nutritionists’ training doesn’t prepare them for individual cases: “I was doing everything wrong according to my nutritionists. But my sugars are better than ever and my energy is great—what I’m doing is working,” says Mark Koekemoer, a CrossFit trainer in South Africa who has been living with Type 1 diabetes for 16 years.

New technology has made diabetes maintenance much easier. Continuous glucose meters (CGMs) help patients monitor their sugar levels; automatic insulin pumps can prevent their sugar from going too high or too low by providing a base level of insulin that they can raise or lower simply by tapping some buttons instead of giving themselves insulin injections multiple times per day. The first FDA-approved “artificial pancreas” that reads glucose levels and infuses insulin accordingly could help thousands of patients who struggle to keep their numbers level.

But diabetes tech is still far less sophisticated than other personal health monitors, such as wristbands to measure sweat and knee braces that can track your treatment for chronic pain. The numbers on the CGM are often about 15 minutes behind real time because they are measuring glucose in fluid between the blood and fat or muscle cell, not in the blood itself, which could mean life or death for someone whose condition is changing by the minute. Every three days, patients must remove and replace tubing for their insulin pumps, which have tubes that go into the body, at home prevent infection. In this age of FitBits and Apple Watches that can quantify all the minutiae of a person’s daily healthcare regimen, why are diabetics still stuck calculating how much insulin they need to inject per gram of carbohydrates to regulate their blood sugar levels? 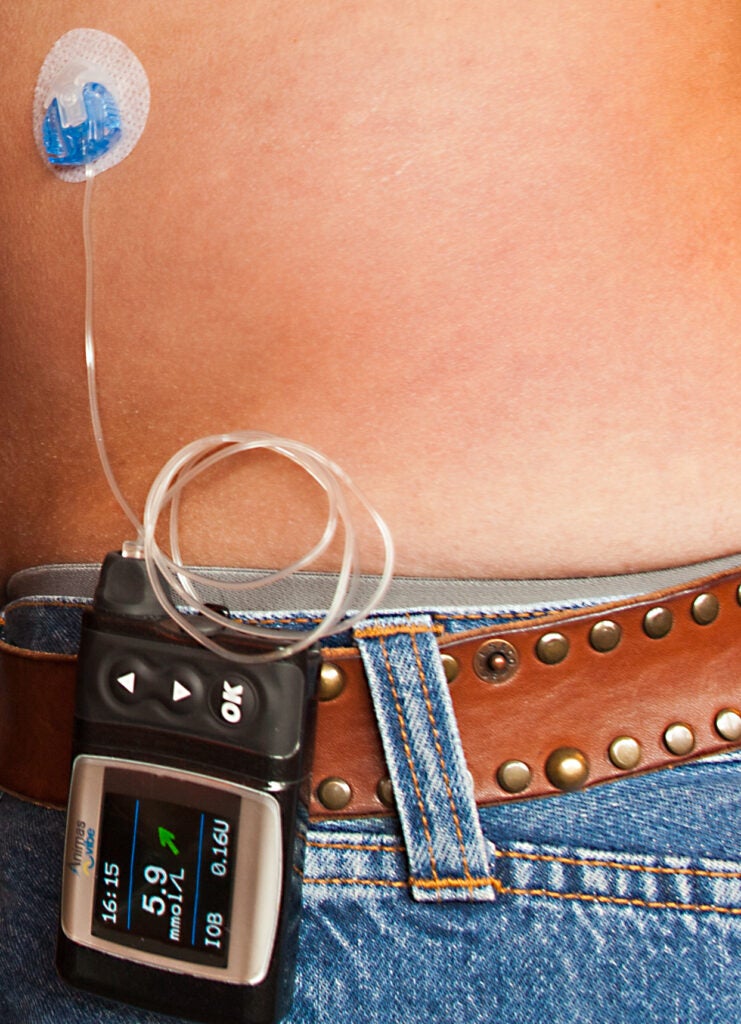 Some diabetics I spoke with think that the FDA is moving slowly because patients are a big source of income for medical companies that produce the insulin, testing strips, sugar pills, and glucose meters that help keep diabetics alive. If insurance rates are any indication, diabetes is quite a racket for medical companies—Wilson, the systems administrator, said that he was uninsured for a while and was repeatedly rejected for new insurance because of his preexisting condition: diabetes. “During that gap when I was uninsured, I would get quotes for premiums. When I said I had diabetes, they said it would be $3,000 per month,” Wilson says.

“You cannot be broke and have diabetes. It does not go hand in hand,” says Craig DeLeone, who works for an education nonprofit in Denver, Colorado, and has been living with Type 1 diabetes for 27 years. “Medicare is terrible, it doesn’t cover a lot of stuff.”

In their wait for better management options, diabetics have had their hopes dashed repeatedly.

After decades of hearing that a cure for diabetes is just five years away, they no longer believe it.

As a result, a number of technically-minded people have ventured out from the existing systems on the market to create software and hardware of their own to better manage diabetes care. John Costik created code that allowed him to check his son’s glucose meter while he was at day care, which led to the development of open-source software called Nightscout (tagline: #WeAreNotWaiting).

In 2013, Scott Leibrand and Dana Lewis used a tiny computer called a Raspberry Pi to create a closed-loop system. The mini-computer feeds information from the CGM into an algorithm and sends commands to an insulin pump, according to a blog on the Raspberry Pi web site. That way, Lewis didn’t have to think about her glucose levels at all, the system just adjusts it for her.

Organizations like Diasend and Tidepool are creating software that consolidates the information in a patient’s various devices, making it easier to access and understand. Some biohackers are even working to create their own insulin, since there’s no generic version of the hormone and it costs much more in the U.S. than it does in Europe.

Sharing hacking tips isn’t the main purpose of r/diabetes, but some do end up there. Most patients are reluctant to test these sorts of devices on themselves for the same reason the FDA is slow to approve them: Because of the consequences if something goes wrong. “In lots of these cases people are getting out soldering irons and putting circuit boards together, the barrier to entry [of creating them] is a person’s limited knowledge of tech,” Wilson says. “And it’s not for the faint of heart.”

Still, every diabetic person I spoke with is buoyed by these new innovations. Even within the past few years, technology has helped them better manage their disease, and they are improving in small steps all the time. Dexcom, one of the biggest producers of glucose meters, recently added software so users can look at their glucose readings on their phones, eliminating the need for them to create their own software hacks. New types of insulin, such as one called Degludec approved by the FDA in September, can provide a more constant level of insulin in diabetic patients. Even more exciting innovations might be soon to come; Koekemoer is excited about Google’s glucose-monitoring contact lens.

Online communities for diabetics can inspire some of those innovations, and help perfect them once they become widespread. Says DeLeone, who works for the education nonprofit, “If you look at how much cell phones have advanced in the past few years, [gadgets to maintain diabetes] can only get better.”

Black thinks it’s great that FDA-approved devices are making things easier for diabetics, but hacked devices still offer some freedom and transparency for more technically-minded patients. These devices, and the communities around them, will live on. “I know for me (and for a lot of other people) the projects were things we wanted to make for ourselves, because everyone wants things a little different,” she writes via Twitter. “Once the project got to a point where we had something viable that other people might like, it kind of forms it’s own community. And then you are just doing it because it is awesome to know you can help someone and [give] that extra bit of comfort.”

Correction 10/10/16, 11:30 AM: This piece previously stated that the “artificial pancreas” administered glucose; the device in fact reads glucose and administers insulin. Also, Dexcom is the manufacturer of glucose meters, not Dexacom as previously stated. The piece has been updated accordingly and we regret the error.