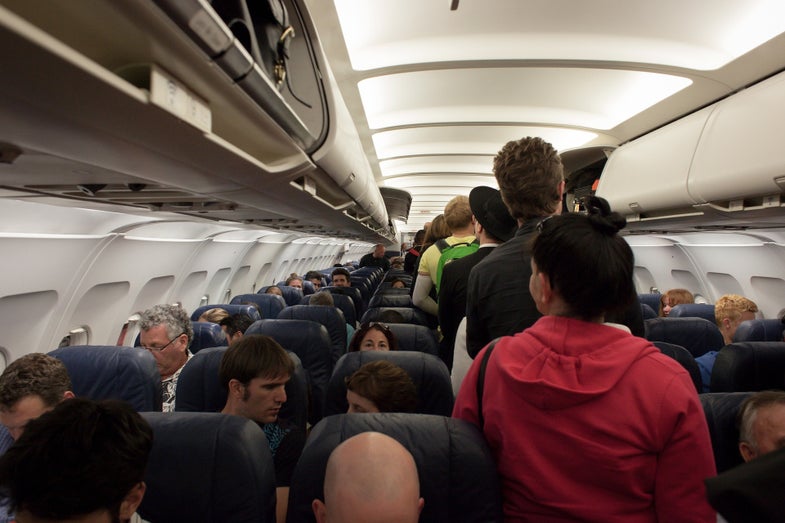 Last week, American Airlines announced a plan to squeeze more seats into new planes by reducing leg room from 31 inches to 29 inches in some areas and 30 in others. It’s easy for the airline to argue that an inch or two is no great loss, but for many consumers the statement serves as a reminder of just how small airplane seats have gotten—and of the potential health risks of confining ourselves to these cramped quarters for hours at a time.

Doctors have known for a while that the development of blood clots, often in the legs—a condition called deep vein thrombosis or DVT—is one of the major health risks of flying. While these clots can cause pain and swelling in the area where they form, they tend to be harmless if they stay put. But if they travel up through the bloodstream to the lungs, they can cause a blockage—known as a pulmonary embolism—which prevents blood from flowing through and getting oxygenated, and can be life-threatening if not treated promptly.

If our legroom continues to shrink, will our risk of DVT and pulmonary embolism go up? Allen Stewart, a cardiovascular surgeon and director of aortic surgery at Mount Sinai Health System in New York, says the risk of blood clots and DVTs will increase as long as the seats remain small (or get smaller) and we continue to disregard the problem. However, he says, for nearly everybody, “blood clots on airplanes are completely preventable.” Knowing how they form and how to prevent them could significantly reduce—or even eliminate—your risk. It’s simple, though perhaps easier said than done: you just have to get up and walk around.

Blood clots are more likely to form while people are on airplanes for a variety of reasons. The decreased oxygen of higher altitudes makes the blood clot more quickly, for starters. Combine that with the fact that people often spend most of their time on airplanes stuck in the same position, causing their blood to circulate less. Any flight longer than four hours puts you at an even greater risk. And then there are risk factors you carry onto the plane with you, says Stewart: if you’re overweight, over 40, post-menopausal, using certain contraceptives, dehydrated, or have cancer, you’re already more susceptible to blood clots.

Even so, the condition is not incredibly common. Only about 1 in 1000 people in the United States develop DVT, and not all of those cases develop on airplanes.

But Stewart emphasizes that the airborne instances of the condition could almost all be prevented if travelers exercised caution. The easiest thing to do, Stewart says, is simply to get up every hour and walk one lap up and down the plane. That’s more than enough activity to prevent the problem.

The problem, Stewart says, is that people tend to fall asleep on airplanes, often with the help of a sleep aid, which ensures that they don’t wake up and walk around. Further, travelers tend to drink less water and fluids on the plane, and often drink alcohol, all of which further dehydrate your body and put you at a greater risk.

But even if you’re awake and full of good intentions, cramped spaces might keep you from stretching your legs. Having less legroom could discourage folks in the middle or window seats from trying to fight their way out into the aisle once an hour. And as airlines cram more and more passengers onto each plane, the decrease in open space could make it (even more) awkward to mill around during the flight.

However, even if you choose to remain in your seat, even just flexing your calf muscles up and down every so often should get your blood moving—combine that with getting up to use the restroom every so often on a long flight, and you’re unlikely to develop a clot. If you’re of average height, you should be able to flex your calves even as legroom shrinks. But taller passengers might start to have trouble taking even these small steps to prevent DVT. It might be worth it to grab that aisle seat.

The bottom line, Stewart says, is that as long as people continue to practice unhealthy plane habits, the rates of DVT will either remain the same or increase—but with a little knowledge (and movement), the condition could be completely prevented.