Scientists want to turn our gut bacteria into medicine 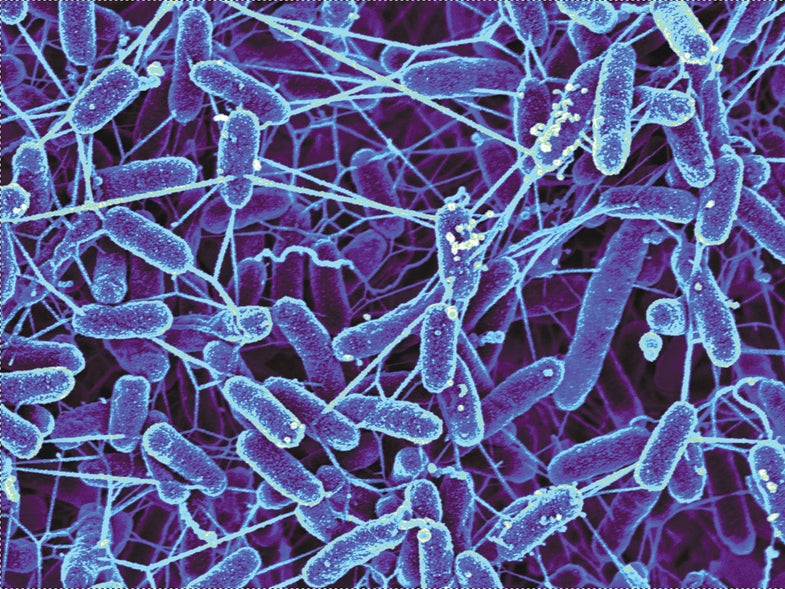 The bacteria inside our guts—which collectively make up the so-called gut microbiome—are incredibly diverse, with countless species and strains. But they also differ depending on the individual, with one person’s microbiome having little to do with another’s. And scientists have found that these differences can relate to our health. A person with diabetes is more likely to have a certain suite of microbes than a person without diabetes, for example. But the mechanisms of this bacterial influence are still pretty mysterious.

In a paper published Wednesday in the journal Nature, scientists took a step towards figuring that out. They found that a molecule produced by certain bacteria can interact with protein receptors in mice—receptors also found in humans—and ultimately improve the rodent’s glucose regulation. The results could help researchers understand how bacteria keep us healthy, and what changes on a bacterial level when we fall prey to disease. And in the future, having that knowledge could allow us to harness naturally occurring microbes to actually treat illness.

“We knew that bugs make molecules that enable them to communicate. And that these molecules target receptors in human cells. Bugs in us are probably making molecules, too. Those molecules might have some effects on us,” says lead author Sean Brady, a microbiologist at the Rockefeller University.

Over the past couple of years, Brady and his team have scoured stool samples to analyze the DNA of microbes living within. All this digging revealed a signaling molecule in the bacteria known as N-acyl amides. In humans, these molecules are involved in a variety of different signaling pathways. For instance, they bind to a group of proteins found on the outside surface of cells known as GPCR. Once bound, they tell the cell to perform certain functions, like release neurotransmitters or other proteins. In essence, they help the body regulate itself.

The researchers zeroed in on the interaction of N-acyl amides with GPR119, which helps control blood sugar regulation in mice. They gave one group of subjects a strain of bacteria containing N-acyl, and left the others without it. They found that the clan of mice that received N-acyl amides had significantly better glucose metabolism than those who didn’t have them. In other words, the mice that got the special bugs were better able to break down and use the energy found in glucose, allowing them to send it to cells and tissues so that it could fuel their bodily functions.

So what does this all mean for humans? We already understand that microbes can have an effect on our health, but how they actually influence us is unclear. If we can identify interactions like the one Brady and his team found—and show that they also occur in humans—we can figure out how to use bacteria as medicine. In theory, such a connection between bacteria and signaling molecules could help regulate blood sugar, control weight, or even prevent autoimmune disease flare-ups.

But this goal is still some years away. For now, all we really know is that a greater variety of gut microbes seems to be beneficial. And the best way to improve gut diversity is to eat a variety of food, including a lot of fruits and vegetables. And fiber. A ton of fiber.