With more research, CRISPR could give us a new cancer treatment. 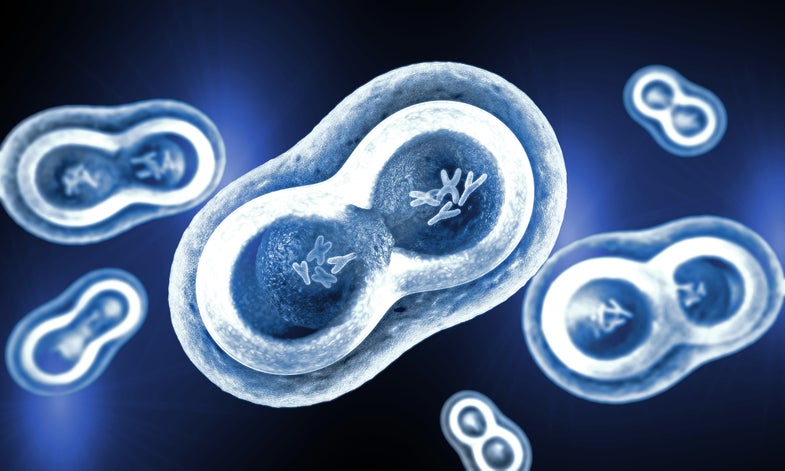 When you think of gene editing technologies like CRISPR, you might imagine editing genes that relate to height, eye color, or our risk of getting certain diseases. But in truth, our DNA and RNA are full of countless proteins whose jobs have tiny yet important effects on our health. Some, for example, are heavily involved in the cell cycle, which regulates how all cells grow and divide—including cancer cells. A group of researchers out of the University of Rochester Medical Center recently used the CRISPR gene editing technique to try to eliminate one of the key proteins that allow cancer cells to proliferate out of control. While it’s just a first-of-its-kind study, the researchers think that in the future, it could be incorporated into a therapy to treat the disease.

Though cancer arises from a multitude of varying triggers, often including a combination of genetic and environmental factors, the different types all spread via uncontrollable cell growth. To attempt to stop this, the researchers isolated a protein that is a vital player in this dividing process. The protein, called Tudor-SN, works to help prepare a cell to divide. Using the recently discovered CRISPR-Cas9, the researchers essentially edited out this protein from the cells. When they did, the cells weren’t able to divide at the same super-fast rate that they were able to before. They published their results Thursday in the journal Science.

The researchers noted that because cancer cells have this defective cell division, factors like Tudor-SN could give us a way to treat or slow down the growth of cancer. But there’s a lot to figure out first. These studies have only been done in a lab on kidney and cervical cancer cells, so the researchers will need to repeat their results again and on other types of cancer cells before they can try them out in humans. For now though, this new study represents both a potentially new way to treat cancer as well as a new way to use gene editing. It will be interesting to see if this treatment could become a stand-alone therapy, or one that gets incorporated into existing treatments.