How to avoid ticks and the many diseases they transmit

Hint: You should know their hunting methods. 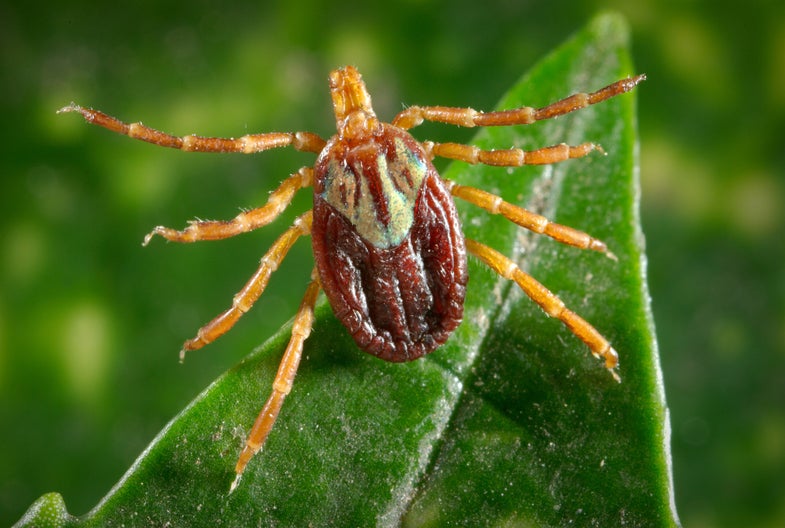 You’re probably already a little afraid of ticks. Sure, there are plenty of more existentially upsetting creatures dwelling deep in the ocean or lurking in dank caves. But you’re unlikely to have to actually deal with any of them, and you’re certainly not going to run into a deep sea nightmare monster while you’re just strolling around minding your own business. Ticks, on the other hand, are everywhere.

Ticks carry over a dozen diseases, literally inflate with blood, drill tiny holes in your skin, and oh, did we mention that actually actively hunt for you? So there’s that.

You probably thought that ticks were just kind of…there. Maybe they sometimes fall and land on your body, or you happen to brush by them on a tree. You assumed that the natural world didn’t have it out for you. You were naïve, you sweet summer child, and you were so very wrong. Ticks may be essentially blind, but they’re not just idly waiting in the woods hoping to accidentally drink your blood. The moment you enter their territory, you become their prey. Ticks are obligate parasites—they can’t survive long without your blood—and that’s a powerful motivator to find a warm body to feed off.

Even up against a tiny, sightless foe, you don’t stand much of a chance. They’ve been around since the Cretaceous period about 145 million years ago, and they have perfected their approach. Prevention only works to a limited extent. But at least in the aftermath of the Great Tick War, you and your opposable thumbs have the upper hand.

Ticks aren’t there by accident

It’s true that you often get exposed to ticks by brushing up against them. But it’s not like they’re just hanging out on a leaf enjoying a sunny day when you happen to walk by. They’re lying in wait.

At the end of a tick’s front legs sits a tiny structure called Haller’s organ. This little sensory pit detects chemicals and odors in the air. And while you can wear all the mosquito repellent and deodorant that you want, you can’t hide the one signature scent that ticks use to hunt you: your breath.

With every exhalation, you release carbon dioxide into the air—and boy does that sweet CO2 get ticks going. Some of them will literally run towards the scent of a potential host. And yeah, ticks can’t run very fast on a human scale, but the mental image of a little arthropod racing towards you on its clicking-clattering legs is still somehow upsetting. They can also pick up other scents like ammonia, so peeing in the woods only makes things worse. As soon as they smell you, they’re comin’ for you.

Researchers actually use this to their advantage when they want to catch the little buggers. One entomologist told Radiolab, in one of the best quotes of all time, that “we often collect ticks by putting out blocks of dry ice on a white sheet. Come back in an hour or two, ticks are all gathered around the block waving their little front legs. Kind of like worshipping a deity.” It would be funnier if it wasn’t so alarming.

That arm-waving behavior is called questing. The most any tick species can actually see is vague shapes, so they can’t exactly run and jump at you. But they can position themselves on leaves and branches, extend their prickly legs out, and wait for you to walk by. And when you brush against them, they board the Human Train headed straight for Bloodtown.

Once they’re on you, you’re not likely to notice them

Some tick species will latch on wherever they’ve landed. Others will roam around your body looking for skin better suited to their needs. They’re especially fond of the area around your ears, where your epidermis is thin and easy to puncture. This is why you often find ticks on your dog’s head—it’s their favorite easy access point.

You’re probably not going to see or feel those teensy-weensy bodies crawling up your arm. But you can make the task a little easier by wearing long-sleeved shirts and pants while outside, preferably in light colors, so any critters on their way to turn your head into an all-you-can-eat buffet stand out. Ticks are usually a dark-ish brown color, so they’ll pop more against a light khaki. And a hat will help protect your scalp, where it’s especially easy to lose a tick in your hair.

If a tick manages to attach itself to your skin, you won’t notice—they inject you with anesthetic first. You’ll remain blissfully unaware as they use their little mouths to drill into you and insert their hypostome, which is basically a tiny harpoon-straw they use to suck blood out of you.

Not a single place in the continental US is safe from ticks’ tiny jaws. The brown dog tick lives in every state, and the other half dozen species have overlapping territories all over. The southeast and mid-Atlantic are the epicenters of the tick world, however. They have the warm, humid climates that help the little arachnids thrive.

Some species prefer woods. Others like tall grasses or shrubs. Still more prefer the dark, damp environs of a cave. The point is: they’re all over the place. And they can spread easily, because they hitch rides on much larger creatures. Increasing deer and human populations have helped them expand their territory already, and the warming climate means they’re able to thrive in more and more places.

Each tick species tends to carry certain bloodborne illnesses, but they don’t just limit themselves to one. A tick can harbor multiple bacteria and viruses. Here’s a small sampling of the ailments you can catch and some of the symptoms you’ll be treated to:

And that’s not to mention alpha-gal syndrome, which results in a lifelong allergy to red meat.

What to do if you find a tick

If you find a tick, the first step is always to panic slightly at how gross they are. Step two is to frantically look around for something to GET IT OFF GET IT OFF RIGHT NOW. The best tool in this case is forceps, which are kind of like tweezers with a locking mechanism—they stay tightly clenched once you pinch the tick. If you don’t have forceps, go for a good set of tweezers. You want to grip the tick firmly, as close as you can to your skin. You’re trying to remove a tiny mouthpiece that’s currently embedded in your body, after all.

So grip that tick by the head and pull firmly. It will probably hurt. If it doesn’t hurt, you’ve likely done it wrong: go back and try to get the little mouthpiece out, because it’s probably still in there. If you can’t, don’t worry too much about it—just leave it alone and let your skin heal over.

Now comes the real fun. Tickborne diseases can take weeks to show symptoms, so be vigilant and look for any rashes on your body. If you have any unusual symptoms, even if you think you’re just coming down with a summer cold, go to the doctor. This is not the time to suffer heroically in silence. This is the time to take advantage of all modern medicine has to offer.