Stop looking for the latest superfood and eat a chili pepper

A hot lesson in nutritional studies. 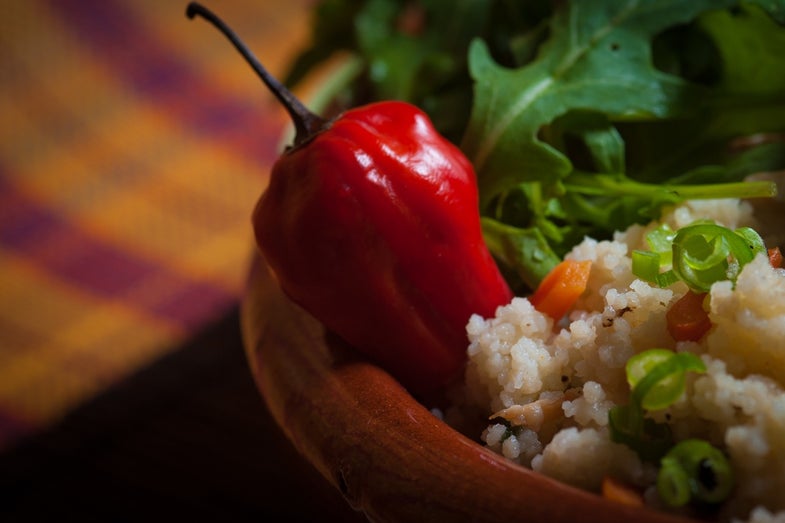 “Tears in Eyes” is a Sichuan dish of soft rice noodles covered in a spicy sauce made of dried, fresh, and pickled chili peppers, chili oil, and, of course, the iconic Sichuan peppercorn. It more than lives up to its name. The dish’s capsaicin content (capsaicin is what gives chilis their bite) is so intense that as tears stream down your face, you start to believe that you’re doing irreversible damage to your tongue.

It is also delicious.

But could Tears in Eyes actually be healthy? After all, for those of us who enjoy eating spicy foods the sensation borders on hedonistic. And it’s rare that the foods we really enjoy eating actually turn out to be healthy (RIP chocolate). But a study released earlier this year found that people who ate hot peppers, like those found in Tears in Eyes, were less likely to die during the study period.

Who needs chia seeds, maca powder, silver needle tea, or goji and acai berries when the world has chili peppers, right? Maybe, or maybe not.

“The study was the idea of my co-author Mustafa Chopan,” says Dr. Benjamin Littenberg, a professor at the Larner College of Medicine, University of Vermont.

Chopan had found a previous study conducted in China that linked eating chili peppers with a lower likelihood of dying during the study period. Chopan was interested in the role of inflammation in the body—under normal circumstances, inflammation is a healthy response to infection or injury, but too much inflammation has been linked to vascular and autoimmune diseases. In the course of that research he’d come across studies suggesting that capsaicin might be an anti-inflammatory, which would account for at least some of the effects seen in the Chinese studies, and he wanted to replicate the Chinese study with U.S. data.

“People in China eat a lot more peppers than people in the United States, and they have different epidemiology, different diseases, longevity and genetics,” says Littenberg. “It was unclear if it would generalize to the United States. Our study suggests that it does.”

Littenberg’s study is just one of many that suggest chili peppers might be unusually good for your health. Some of those studies say that chili peppers might induce weight loss (by improving insulin control), and that capsaicin might stop the growth of prostate cancer, and cure gut problems. We should all be loading up on chili peppers, right?

Not so fast according to Littenberg, who (despite gentle prodding) would not say that chili peppers impart on their consumer a vampire-like longevity.

The issue is that his study—and many like it—are observational in nature. That is, someone asked a bunch of people to write down what they ate over a period of time and then tracked how long they lived, and if they died, recorded how they did it. These kinds of studies are useful at suggesting correlations—possible avenues of inquiry for further research—but they can’t say that x causes y, because they aren’t designed to come to that kind of conclusion.

“We’re not saying anything about whether you should eat chili peppers,” says Littenberg. “What we’re saying is that people who ate chili peppers in America between 1988 and 1994, when the data was collected, live longer. We don’t know why. It might be that there’s something else going on.”

When Littenberg says, “it might be there’s something else going on,” he’s referring to what’s known as a confounding factor. Chili peppers, after all, are a polarizing food: some people love the heat while others have to get out of the kitchen. It could be, for example, that there’s a gene that makes certain people crave chili peppers—and it’s that gene, and not the peppers themselves, that provides the health benefit. It could be that when people get seriously ill, they lose their taste for chili peppers and stop eating them, so that anyone close to death in the study data was unlikely to report binging on spicy foods. Or it could be that consuming chili peppers encourages another behavior—like drinking lots of water—that leads to better health overall.

“In nutrition research it is very, very difficult to come up with proof, because almost all nutritional interventions that you care about are going to take years to show an effect,” says Littenberg. “You have to randomly assign people to go on a high pepper diet or the no pepper diet and enforce that for years and years, and count how many people die. That’s obviously a hard study to get people signed up for.”

“Our data plus all of the data together do not convince me that I should start eating peppers in large quantities,” he adds. “And I don’t like them, so I’m not gonna.”

This isn’t all bad news for pepper lovers.

First, Littenberg’s study showed a decline in deaths among chili pepper eaters from heart attack and stroke, but not other causes of death like cancer, which suggests that they aren’t tracking general lifestyle factors like wealth, or access to care. It suggests a correlation worthy of more research, if nothing else.

Additionally, not all of the studies looking at chili peppers are observational. Some, like a recent paper on the effect of capsaicin on the gut, were done in cells and in lab animals, which again have their own drawbacks (namely, that the animals weren’t people), but like Littenberg’s study suggest room for continued research. Some of the weight loss studies did actually split people into pepper and no pepper groups, albeit for relatively short periods—up to twelve weeks. And the medicinal properties of capsaicin—or at least a synthetic variant —is in full display in many over-the-counter pain-relieving creams. Which brings us to an important point: what a lot of these studies are really trying to determine is if peppers might be useful as potential medicines. If studies show, for example, that eating peppers can reduce strokes or heart disease, scientists can start taking peppers apart to find the active chemical components behind this health benefit, and potentially create a drug. So while all of this research is indeed important to science, it has no business determining what you put on your tacos.

But unlike a lot of foods that pop up in the news whenever a single observational study sings their praises, chili peppers are actually good for you—in, like, the normal food way, if not the superfood way. Unlike wine (which contains a lot of sugar, alcohol, and calories) and chocolate (which contains a lot of sugar, fat, and calories) at the end of the day, peppers are a perfectly fine way to get the five to nine servings of fruit and veggies that the USDA recommends that we consume daily. They’re low in calories and rich in fiber, vitamin c, and carotenoids. In other words, we don’t need additional research to tell us that they’re worth eating—If you like chili peppers, go ahead and load up.

But if chili peppers aren’t a wonder food, what is? Littenberg has an answer for that too.

“Really, the only convincing data that we have as a wonder food is starvation,” says Littenberg, hinting at practices like intermittent fasting, where people go as long as 16 hours a day without eating, or simply forgo eating for a day a week. “If you survive starvation you live longer, whether it’s a little bit of starvation chronically or intense starvation for periods of time.”