Americans keep buying veggies and then throwing them away

Healthy foods are the ones we’re most likely to trash 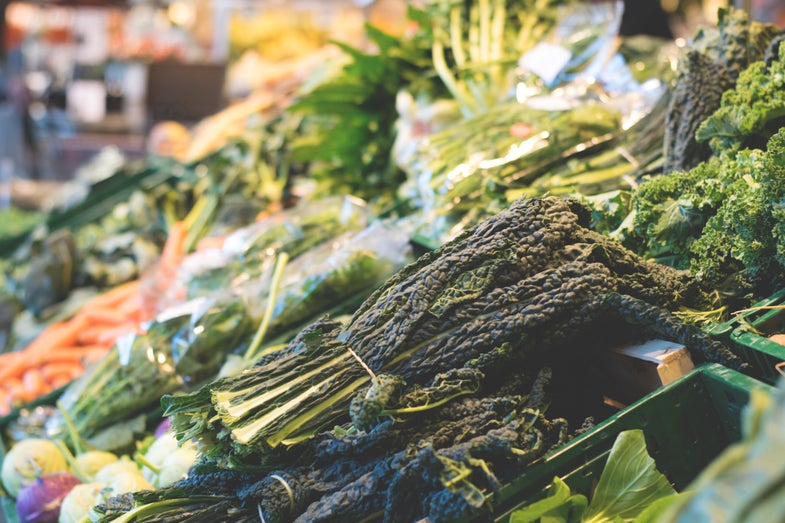 Struggling to get more vitamins? You might try checking your garbage can.

A new study in the Journal of the Academy of Nutrition and Dietetics indicates that America’s massive, ever-growing piles of wasted food are full of some of the most nutritious foods.

“Other researchers had already tracked the amount of food that’s wasted in terms of how much it weighs, the economic value, and how many calories were in it,” says lead author Marie Spiker, a doctoral student in the Department of International Health at Johns Hopkins University. “Our primary motivation was to go beyond calories and look into other nutrients to really show the magnitude of the food that we waste.”

The answer, as it turns out, is a lot.

Take fiber, for example: the recommended intake for your typical 19-30-year-old American woman is 25 grams per day. On average, she consumes 16.1 grams per day—about a third less than the fiber intake one requires to, among other things, keep bowels running smoothly. In men, you can bump that recommended consumption up to 38 grams, and actual consumption averages at about 20—just over half of what the body actually needs. According to Spiker’s study, Americans throw out enough food each day to bridge the dietary fiber gap for 206.6 million women (or 103.9 million men).

That’s a whole lot of poop.

Spiker uncovered these results using two United States Department of Agriculture (USDA) data sources. The first, called the Loss Adjusted Food Availability (LAFA) tracks the waste levels of 213 commodity foods at the retail and consumer level in terms of pound per person per year. The second data source is called the National Nutrient Database, and it details a given food’s nutritional content—how much calcium is in a cup of kale, how much vitamin C in an apple, and so on. Spiker and her colleagues linked the two together, uncovering the amount of 27 different nutrients packed into the 213 types of food that are wasted each day.

Spiker’s work takes the existing research a step further to look at what types of foods—and what nutrients—are most frequently wasted, and by whom. She found that while retailers and consumers waste an equal number of calories, consumers waste far more nutrients. We’re not throwing out snack cakes, but we are throwing out spinach.

And there’s a reason for that.

“It’s known that we do waste more of perishable foods,” says Spiker. “If we think about what the perishable foods are, they’re vegetables, they’re fruits, they’re dairy products, they’re meat. When they are sitting in our kitchens, if we don’t use them, they’re the ones that tend to spoil faster than processed and packaged foods. So, these foods that are perishable are also the ones that are really rich in nutrients. When we’re looking at fruits and vegetables and we see color, those colors are actually a signal that these are foods that are rich in vitamins and minerals.”

Wasted food is a growing concern, not just because it’s just wasteful but also because it hurts the environment. It takes a ton of resources—from land use to fertilizer—to get food on our table. Having to make more than we actually buy and consume means using more energy. And when food ends up in landfills, it releases methane, which is a potent greenhouse gas and contributor to climate change. And not all food is infinitely available: throwing out 40 to 47 percent of seafood that comes to the United States doesn’t just make it harder to get our omega-3 vitamins, it also means that we’re going to run out of fish faster.

It’s hardly a surprise then that in September of 2015, the United States Department of Agriculture (USDA) and EPA announced the first ever domestic goal to reduce food loss and waste by half by the year 2030. But you don’t have to wait for policy to kick in to do your part. We can all be a part of the solution by simply eating the food we pay for.

Spiker recommends checking your fridge and pantry before heading to the grocery store, so you don’t double up on things that you already have. And, with the exception of baby food, you can ignore just about any sell-by date you see on a package. Outside of baby food, those dates don’t actually tell you whether or not a food is safe to eat; they’re simply a guarantee of quality.

Earlier this year two of the largest groups in the grocery industry, The Food Marketing Institute and the Grocery Manufacturers Association, announced that they were going to adopt standardized, voluntary regulations to clear up what product date labels mean. But until those labels start showing up on shelves, you can trust your nose and your taste buds. If something looks and smells funky, throw it out. Otherwise it’s fine to chow down.

And in order to waste less food and eat more vegetables, you may need to stop buying them fresh. If spinach tends to rot in your fridge, for example, buy the frozen stuff. It’s still great for you, and you’ll have a much wider window of opportunity to consume it before it goes bad. After all, the healthiest way to eat a vegetable is whichever method actually gets you to eat one.

“We need to be realistic when we’re purchasing,” says Spiker. “And once we’ve brought the foods into our homes, we need to make sure that we’re incorporating them into our meals and eating our leftovers—even when the easiest thing might be to order takeout.”