What’s next for the drone war?

If Trump follows Obama's precedent, careful consideration and gradual transparency. But that's a pretty big "if." 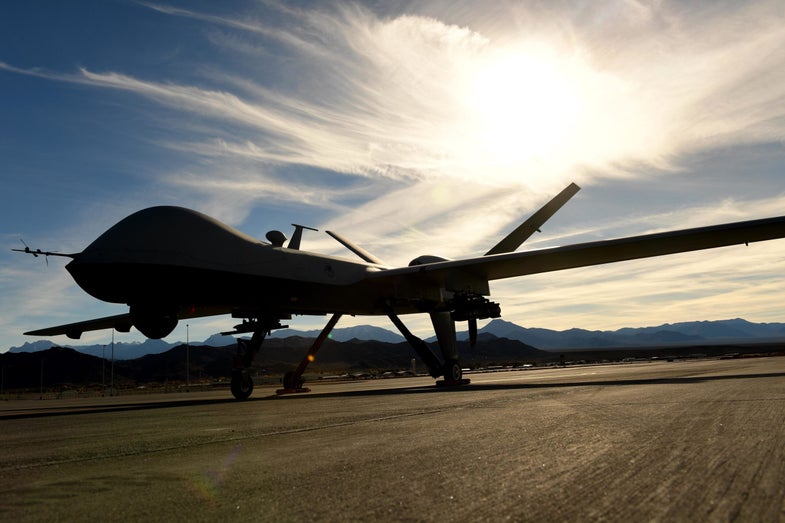 On Jan. 20, the drone war entered its third Administration. Over the inaugural weekend, American drones fired missiles at suspected Al Qaeda fighters in Yemen, killing five people. The drone war, that is, the popular, unmanned-vehicle term for America’s strategy of targeted killing, is an outgrowth of President George W. Bush’s war on terror, a vestigial organ that became the centerpiece for the Obama administration’s eight years of low-intensity warfare. With much of American national security strategy poised to change under the new Trump administration, it’s worth taking a step back to examine what, exactly, the United States hoped to do with its drones.

The United States is, it’s worth noting, at war. It is in fact still at war, and has been ever since the passage of the Authorization to Use Military Force in the week following the Sept. 11, 2001 attacks. That act, still in effect into its fifth presidential term, gives the President broad powers to use force against persons and organizations that can be linked back to the Sept. 11 attack, and has been interpreted broadly enough to include ISIS. This is the context in which the drone war was born, an adaptation of a military scout into the most iconic aircraft of modern counterinsurgency warfare.

Rethinking the Drone War is a collection of reports recently published by Marine Corps University Press. The focus is about the national security potential for, and legitimacy of, drone strikes, and the dangers of civilian casualties, as the United States uses remotely piloted vehicles to pursue a war on terror.

“I think sometimes people think about drones and they think ‘killer robots,’” says Larry Lewis, who together with Diane Vavrichek wrote the reports in the book. “There’s also an interest due to a false understanding of what drones actually are and what they do.”

Drones are not, yet, the autonomous machines of fiction. While there are many existing weapons with some degree of autonomy, drones like the Predator and Reaper are still piloted vehicles, with humans controlling what the camera looks at, where the drone flies, and what targets to hit with the drone’s missiles. Humans actively pilot drones, and the Air Force struggles to find enough people up to the task.

And then there’s a shared misunderstanding of how, exactly, drone strikes work. Drones have the potential to be more precise than other airstrikes: with long linger times, a drone can stay in place or follow a suspected vehicle for hours before making the decision to fire, and powerful cameras mean drone crews can carefully decide whether to press the trigger. Yet that’s not always the case. A study Lewis published in 2013, using classified military strike data, found that drone strikes in Afghanistan caused 10 times the casualties compared to strikes by manned aircraft.

“There’s often a focus on platform and not process,” says Lewis. “All of our government officials talk about drones as the most surgical method of warfare. What they’re doing is they’re focused on the platform and capabilities, not how these capabilities are used in practice.”

Much of “Rethinking the Drone War” focuses on that practice, and on the places in the process that errors happen. There’s one particularly striking section, discussing a drone strike on a civilian vehicle in Afghanistan in 2010.

The Predator crew relayed their interpretation of what was happening to waiting special forces, which fired on the vehicles and then saw signs that they may have attacked civilians instead. This incident was fundamentally a human failure, hobbled by poor communication between drone operators, special forces, and image analysts, that ultimately left innocents dead and undermined the legitimacy of American forces in Afghanistan.

Because so much of the drone war is conducted in secret, it’s hard to know what, exactly, are the rules governing the process. In May 2013, the Obama administration released a Presidential Policy Guidance on “Procedures For Approving Direct Action Against Terrorist Targets Located Outside The United States And Areas of Active Hostilities,” or a guide on how the United States conducts its drone strikes, in keeping with the Obama Administration’s interpretation of the laws of war.

We know the details of this policy because the Obama Administration declassified it in August 2016 (with light redactions). It was part of a broader move toward transparency on the drone war, following an earlier promise of disclosure of civilian casualty estimates from drone strikes. The disclosure aligned with the goals of an administration that spent the better part of a decade continuing a war it had inherited, while still trying to ensure that every part of that was conducted within humanitarian law.

So how will the drone war continue under its third administration?

“The difficulty is that ultimately any policy will try to maximize opportunity while managing risk,” says Lewis. “If you look at the recent raid in Yemen, that was an operation that was turned down with the past administration, and then was approved in the present administration. That’s an example of moving toward greater opportunity, but also creating increased risk, which we saw in practice. So a new policy will have to strike the balance somewhere, and it’s too early to tell exactly where it would go, but I would sort of expect an increased appetite for risk.”