The Army's Precision Airdrop System aims to save lives 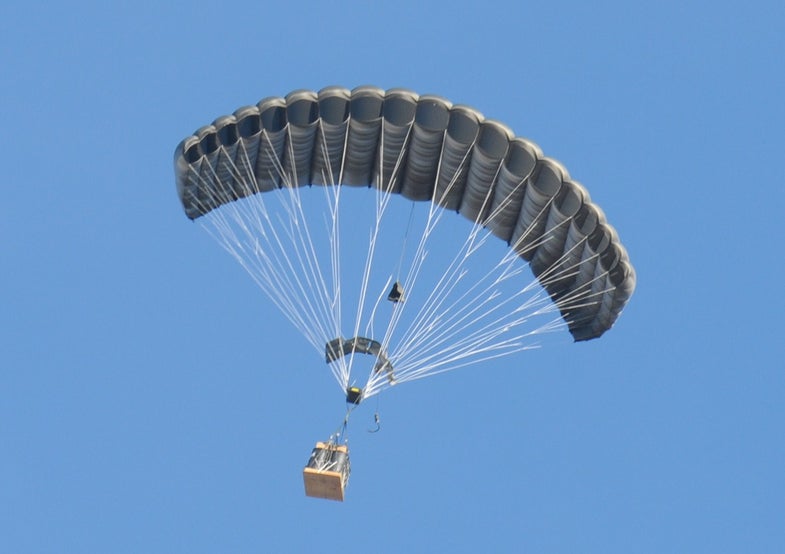 This is a fairly common scenario during the conflict in Afghanistan: A forward operating base along the Khyber Pass needs supplies, and a C-130 cargo plane is dispatched to deliver them. The plane aims to drop several 2,000-pound pallets carrying food, water and ammunition.

Enemy fire in the area will make a supply recovery mission risky, however. An Army convoy must risk IEDs and sniper fire to retrieve the goods. If only the pallet would only drop more precisely, much closer to the base”s boundaries, the soldiers could stay out of harm’s way.

To do this, the pallet must sail through treacherous, parachute-ripping rock outcroppings, landing in a patch of earth that a convoy can quickly and easily reach. A laptop on board the C-130 can account for wind speeds and other variables, adjusting the pallets’ path accordingly. But it’s difficult to aim a 2,000-pound falling object after it drops out the back of a giant airplane.

Now, new algorithms allow the pallet to fly like a paraglider and land with supreme accuracy, according to the nonprofit research lab that designed them. Supply delivery is getting much more precise — within a few feet to a hundred yards of a target (the exact numbers are classified). What’s more, the same technology could improve disaster relief and humanitarian missions, and even lead to smarter, more independent UAVs.

The U.S. Army’s Joint Precision Airdrop System (JPADS) 2K could allow the military to revamp its resupply tactics, reducing the need for convoys that expose troops to enemy fire, according to researchers at Draper Laboratory.

“it’s similar to a UAV in the sense that now it has become a guided aircraft of sorts. It’s released from a cargo plane, and it’s fully autonomous from the time it is released until it touches down,” said Andreas Kellas, autonomous systems business leader for defense at Draper. “They can turn left and right, and fly winding, serpentine trajectories that are constantly being recomputed in real time. They can compensate for shifting winds, compensate for terrain, so they land at the impact point as accurately as possible.”

The system is a successor to an existing airdrop capability developed back in 2006, Kellas said. The original JPAD work enables cargo drops to land with an accuracy of 300 to 400 meters — not bad, but still equivalent to several football fields of potentially dangerous terrain. In the mountainous areas of Afghanistan, this is especially problematic, Kellas said. What’s more, insurgents often mix with civilian populations and the battlefield lines are unclear, so hyper-accurate drops are even more important.

“With our style of warfare and the type of conflicts we’re engaging in, it’s not clear that ‘here is our zone and here is the bad guy’s zone,'” Kellas said.

Airdrops also must minimize collateral damage. Resupply missions targeted for Libyan rebels, for instance, would do more harm than good if they hurt people or damaged a building like a school. At least one famous freak accident in southeast Asia demonstrates the technology’s importance: In September 1999, a six-year-old boy in East Timor was injured after being struck by a food parcel from an Australian military airdrop. His injuries were so severe that one of his legs was amputated below the knee, reports the Overseas Development Institute.

“That’s an exact example of when you’re dealing with civilian populations, of how careful you need to be, so not only the intention is good, but the effect has no negative impact,” Kellas said.

Working with the Army’s Natick Soldier Research Development Engineering Center, Kellas and colleagues at Draper built new algorithms that account for velocity, wind and terrain, using highly detailed maps and military GPS. Draper gave the Army an open-source license for the airdrop software, which is platform-agnostic, meaning it could be installed on any number of JPAD systems offered by various military contractors. A limited number (also classified) were recently deployed in Afghanistan. 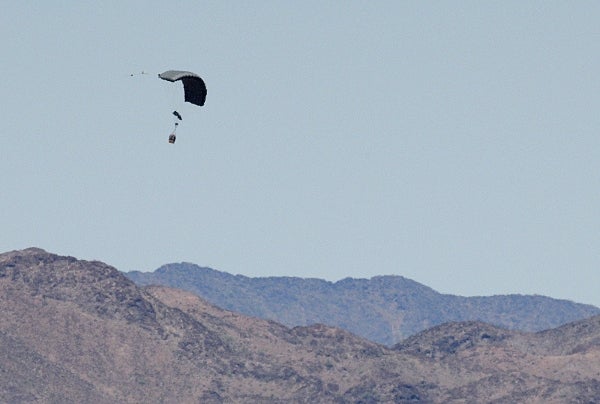 In the current system, a 5-pound package with a small parachute has been proven accurate to within a few feet, and an average of about 50 yards, Kellas said. A 2,000-pound package must land within 110 yards of its target, and Draper’s software is well within that range. It’s an impressive feat for an object with a 30-foot parachute canopy.

Beyond helping the military, the system promises to improve unmanned aerial vehicles. Though they fly solo, UAVs are still remotely operated, partly because their control algorithms aren’t advanced enough to account for various environmental factors. The parachute system’s algorithms will help with variables like wind estimation, terminal guidance and terrain and obstacle avoidance, Kellas said.

The next generation of pallets will even be able to talk to each other. As each pallet falls out of the cargo plane, it will share wind and weather data with higher-altitude systems to improve their own flight patterns. And the Draper team has developed algorithms for avoiding collisions among pallets flying through the same airspace. Draper is already testing these updates the Army’s Yuma Proving Ground in Arizona, and they could easily be incorporated in to the lab’s own UAV algorithm projects, Kellas said.

Meanwhile, the system could help with rescue missions or other needs that are totally unrelated to the military, he added. Drones equipped with this level of precision could have helped pinpoint water drops during the Japanese nuclear crisis, or pour water and fire retardant on the wildfires raging in Arizona and New Mexico.

“This is a really cool example where a DOD investment in military technology has several other applications in civilian and humanitarian operations,” Kellas said. “There’s a myriad of applications that could be done with this.”