Fight The Ukraine War In Your Browser 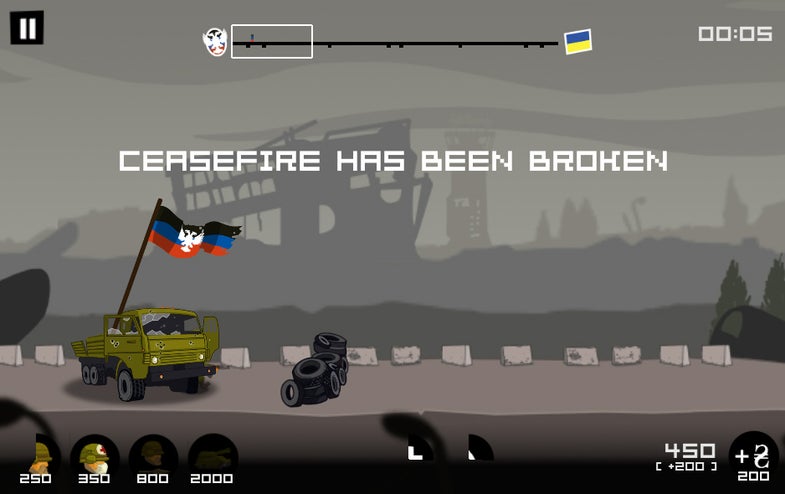 Without planning it, the first thing I did was break a ceasefire. My newly hired infantryman marched across the rubble-strewn battlefield, soon accompanied by medics and heavy weapons. Across the way, marching from another ruined truck with a different flag on top, came my opponent’s army, all in single file. Later, after my mortars fell silent and tanks broke down, I was greeted with a defeat screen, noting that while I had bested my opponent, I had really suffered a loss because of all the civilians I killed. “Battle For Donetsk” is a browser game about Ukraine’s current war. It’s a straightforward medium with a blunt message.

The game runs either in-browser on the Unity player or on Android devices. After selecting between either the Donetsk People’s Republic–a separatist group in Eastern Ukraine–or the Ukrainian Army, players view a battlefield stretching between two trucks. Every few second players automatically acquire 200 resources and they can spend some to upgrade how quickly supplies come. These resources can be spent on either troops, medics, heavy weapons specialists, or tanks. Players can also air-drop in medical supplies or call for mortar strikes. Games last about five minutes. It’s an old game format, dating back at least to 2008.

There are a couple of quirks to hammer down the game’s anti-war message. Neither side will fight until the human player clicks an option other than the income upgrade, but as soon as that happens a “ceasefire has been broken” warning flashes across the screen. (I accidentally broke the ceasefire by recruiting a soldier.) After the battle, the game declares the player defeated, regardless of their success in the conflict. There’s a screen that tallies up civilian casualties by gunfire, mortar, unguided rocket, and starvation. The About page for the game explicitly states that it’s “a war game with an anti-war message.”

Made by the Belgian LuGus Studios, for as much messaging is in “Battle for Donetsk” it is still very much a game. While actively fighting the battle won’t yield a victory screen, I stumbled across one after a minute of not fighting. To borrow a line from 1983’s Wargames, the only winning move is to not play.