Before the Raid, SEALs Rehearsed in a Full-Scale Replica of the Bin Laden Compound

The anonymous team behind the assassination, and how it went down 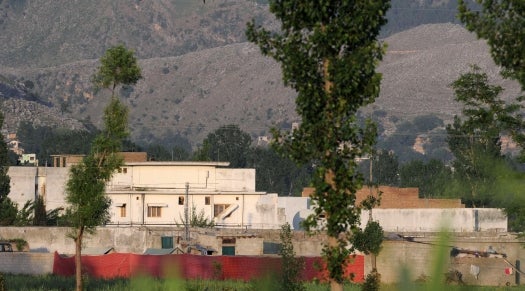 The Navy SEAL team that offed the 21st century’s most wanted man Sunday was so concerned about preparation and accuracy that they re-created the one-acre compound where their target was living, “Ocean’s Eleven” style. The SEALs ran trial runs there in early April until they were ready to take down Osama bin Laden.

This snippet, mentioned in a depiction of the raid posted at the Atlantic, highlights one particularly interesting facet of this operation: It centered on people. Certainly, the specialized Black Hawk helicopters, hyperspectral imagers and other tactical technology were key — but in the end, bin Laden met his demise at the hands of ultra-trained human warriors, not machines. Here’s how it went down.

Back in August, American officials received a tip that bin Laden was hiding in Waziristan Mansion, a suburban compound with walls up to 18 feet whose residents burned their trash and employed various other security measures. Over the next few months, CIA analysts studied whether the chief resident could be anyone else, and decided it was almost certainly him.

In March, President Obama authorized a plan to bomb the compound using B2 stealth planes carrying 2,000-pound ordnance. But ABC News reports the president learned the compound would be reduced to rubble and changed his mind, partly because of the risk of civilian casualties and partly because the destruction would mean there was no proof the leader of al Qaeda was dead. Then he ordered in the SEALs instead.

SEAL Team Six practiced at Camp Alpha, a segregated portion of Bagram Air Base in Afghanistan, using a replica of Waziristan Mansion. Team Six, also known as DevGru (the Naval Special Warfare Development Group), is part of the Joint Special Operations Command, the same folks who took out a team of Somali pirates two years ago to rescue a merchant marine captain.

Obama authorized the raid Friday morning, and proceeded to the planned launch of space shuttle Endeavour with First Lady Michelle Obama and their daughters. He also toured areas in Alabama that had been devastated by a string of tornadoes last week.

The operation was scheduled for Saturday night, when the team could take advantage of scant moonlight, but cloudy weather over Islamabad pushed it back to Sunday, according to various reports. The SEALs boarded modified Black Hawk helicopters at Ghazi Air Base in Pakistan and flew to the compound without alerting Pakistani authorities. Though U.S. authorities have not confirmed any additional air support, Danger Room points out that it’s unlikely the CIA and JSOC would risk sending in a bare-bones team to face terrorists capable of shooting down helicopters. (One of them crashed, which the military said was the result of mechanical problems, and it was subsequently destroyed.) “That means air cover—most likely armed drones or Air Force gunships,” Danger Room notes.

The SEALs swept in, engaged in a firefight, ordered bin Laden to surrender, and when he refused, shot him twice in the head. Such a “double tap” would be standard procedure, military officials told ABC News. His body was quickly taken away for DNA testing, ensuring it was really him. Bin Laden was later buried at sea according to Islamic rites. American officials are still contemplating whether to release photos of his body.

ABC obtained video from inside the compound, which you can see below. Warning: Some images are graphic.

In the first hours after bin Laden’s death was announced, authorities were careful to point out that people, not drones, did him in. Danger Room notes that drones couldn’t have gotten it done no matter what — the compound’s location all but precluded a successful drone attack. Check out its location and you’ll see why. 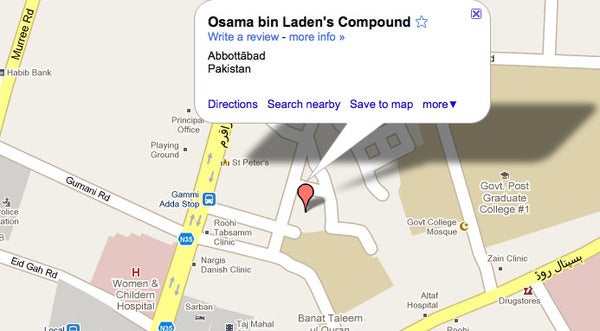 The compound was added to Google Maps within moments of President Obama’s announcement, showing its proximity to, among other landmarks, a clinic for women and children. It’s only a few hundred yards from the Pakistan Military Academy, which the BBC describes as equivalent to West Point in its elite exclusivity. And it’s within the boundaries of Pakistan’s air defense intercept zone for the capital, which is about 35 miles away — towards Pakistani enemy India. All this would have almost certainly lit up Pakistan’s surface-to-air defense capability, letting the cat out of the bag and perhaps compromising the entire operation.

The AP reports US intelligence officials believe the mansion was built in 2005 for the express purpose of harboring bin Laden.

The SEAL team was in and out in under 40 minutes, including the entry, firefight, and extraction of bin Laden’s body. The team also grabbed computers and other intel that could help unmask more al Qaeda deputies and funding sources, officials said.

Intelligence officials are no doubt poring over every pixel of information taken from that mansion, and the most advanced technology in the world will help them analyze it. Meanwhile, the U.S. is on alert for retaliatory action, and homeland defense authorities are employing enhanced security measures, including tightened patrols at airports and on public transit. Along with unraveling bin Laden’s network, technology could help prevent future terrorist attacks, pinpoint al Qaeda operatives, and conduct surveillance and reconnaissance.

But this operation shows that when failure is not an option, even in the future, it will be people, not machines, that get the job done.