An official number, oddly lower than all previous estimates. 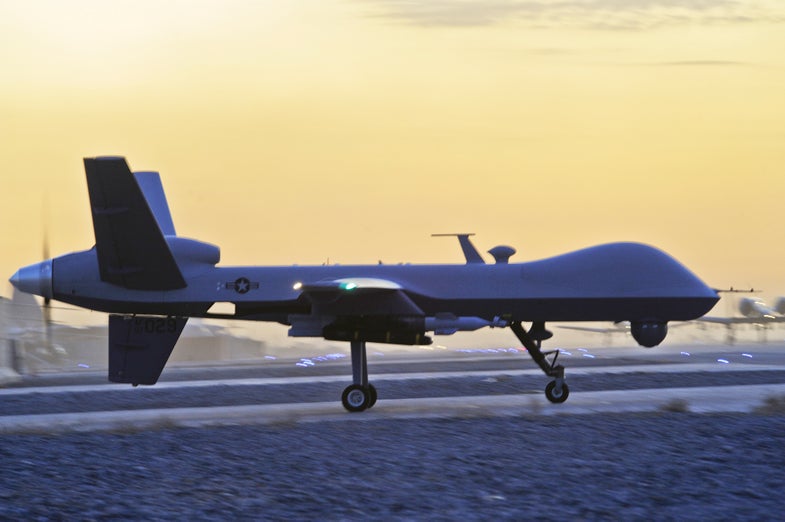 Who do we become when we die? Our identities are such fragile, personally curated things: we go through life as children, then students and peers, and sometimes switch to a vocational preference. A person becomes farmer, shepherd, mechanic, soldier, baker, homemaker, brigand, or bandit, or backyard bomb-maker — whichever strikes us by calling or necessity.

People assume narrower identities, a lover for an afternoon, a wedding guest for a weekend. Perhaps it’s the wrong wedding, the wrong place, the wrong people, and whatever mish-mash of identities, they end with a hellfire strike and a grim, clinical finality. The bodies become “military-age males,” the rich matrixes of interwoven identities collapsed into two categories, a fatal guilt decided abroad in the moment of impact.

Next week, the Obama Administration is expected to announce the civilian death totals from America’s targeted killing campaign by drone. The number will be low. The administration “believes around 100 civilians have died in nearly 500 U.S. drone strikes since 2009,” U.S. officials told NBC.

Reporting on casualties in conflicts, especially ones where everyone involved has a vested interest in some competing version of the truth, is tricky. In 2013, one estimate of the campaign at that point held 3,000 total casualties from drone strikes, with reasonable certainty that at least 700 or so were civilians and children

The Bureau of Investigative Journalism, a nonprofit that’s covered the casualties of the drone war for years, found between 259 and 636 reported civilian deaths from drone strikes in Pakistan alone. The Bureau also maintains records for strikes in Yemen and Somalia, and notes that children as a percentage of drone strike casualties decreased greatly over time.

Other accounts vary greatly, with the 100-civilians figure from the administration at the lower end. Accompanying the announcement is likely to be a change in policy.

It’s unlikely that any change will prevent this or future administrations from using drones for targeted strikes entirely. Drones are particularly well-suited as a tool of war against non-state actors like Al Qaeda, the Taliban, and ISIS. They are also weapons that can afford to wait. The cameras they carry capture a tremendous amount of detail, enough to differentiate somewhat between the people down below.

With an expectation of transparency on the program, perhaps future drone missions will do better in striking only those who themselves self-identify as agents of malicious violence.