Congress Is Making Plans To Limit Use Of Military Drones 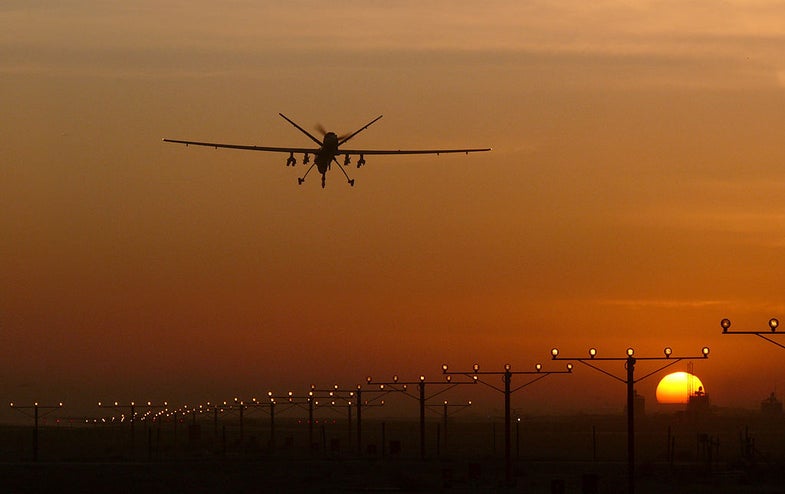 Inside the National Defense Authorization Act, the congressional bill that grants the Department of Defense the ability to spend money alloted to it, lie a host of amendments that alter the way American military force is acquired, spent, and applied. This year’s bill, H.R. 4435, already has three submitted amendments governing the use of drones by the military. Amendment 99, wants to clarify how the casualties of drone strikes are labeled, so that official language matches the ambiguity of reality. Amendment 218 wants to make sure no drone strike ever kills another American. Amendment 234 wants to transfer drone authority away from intelligence agencies and into the hands of uniformed military personnel. Together, they constitute a substantive critique on the worst excesses of America’s targeted killing program.

“Limitation on Identifying Individuals Killed in a Strike by an Unmanned Aerial System” comes from Representative Alan Grayson (D-Florida). Here is the text of it in full:

This addresses a major problem of targeted killing, and one that has beleaguered critics of the operations for years. Strikes kill more than just their intended targets (or just innocent groups that look like intended targets), and under current White House policy, all military-aged males killed in a strike are labeled as militants or insurgents, and after their death retroactively labeled legitimate military targets. The main problem with this is there’s tremendous ambiguity in knowing who exactly was killed in a strike, and their relation to American war efforts or involvement with a hostile group. Grayson’s amendment goes far, requiring that the victim of an attack be labeled unknown unless they’re in a uniform, which by definition insurgents never wear, or the available intelligence can name the individual. It is also limited, written only about drone strikes and ignoring those carried out by cruise missiles, aerial gunships, other manned aircraft, or any other military means.

“Prohibition on use of Drones to Kill United States Citizens” was authored by Paul Broun (R-Georgia), Here’s the text:

Broun’s amendment is notable in two respects. The first is that it enters a legal definition of drone, which is a word commonly used by both media and lay people but generally avoided in both industry and military circles. Here the definition is that used by the FAA for “unmanned aircraft,” which is largely how the word drone is used in speech today.

The other noteworthy part of Broun’s amendment is how it relates to the case of Anwar al-Awlaki. Awlaki was an American citizen killed by drone strike in Yemen. His son, Abdulrahman, was killed two weeks laker. The Obama administration argued that al-Awlaki, as a member of al-Qaeda which was at war with the United States, was a specific and significant enough threat to justify the strike. While that’s a definition that fits under the exceedingly broad Authorization for Use of Military Force, the law at the heart of the War on Terror, it likely wouldn’t pass the stricter “actively engaged in combat against the United States” wording of Broun’s amendment. And the follow-up killing of al-Awlaki’s son would explicitly be prohibited by the Broun amendment, if not already expressly forbidden by the constitution.

Written by Ted Yoho (R-Florida), and with seven co-sponsors across party lines, the “Department of Defense Executive Authority Over Use of Armed Unmanned Aerial Vehicles” is too lengthy to repeat in full here, but this is the core of the amendment:

Currently, the CIA owns over 80 drones. Transferring control of those drones out of the intelligence community and back to the military has long been an aim for drone war critics, though it’s something of a mixed-bag. Drone uses carried out by intelligence agencies are expressly reported to Congressional intelligence communities, while the Department of Defense can be cagier in its answers. This CIA reporting is also required by law. Yet there’s an odd tradeoff – the CIA most report to Congress, but can carry them out otherwise in secrecy. The Depart of Defense, in turn, is more public in its drone operations abroad, losing some of the covertness of a CIA mission, but can report less detail on them to Congress.

Indeed, one of the major arguments in favor of consolidation is just cleaner housekeeping, where all drone strikes fall under military rules and military authority. Yoho’s bill would force that consolidation, and the accompanying change in domestic reporting and foreign secrecy that accompanies it.

Yoho’s bill also specified unmanned aerial vehicle, without mandating the vernacular use of “drone.” Here is his definition, which is notable for including eight names, seven of them involving acronyms:

As of writing, the House Rules Committee has yet to decide which, if any, of these amendments to advance to the floor for possible inclusion in the bill. Even if they don’t make it into law, they’re already outlining the future constraints that Congress envisions for drone use, especially as the United States moves out of Afghanistan and the War on Terror enters the later stages of its life.