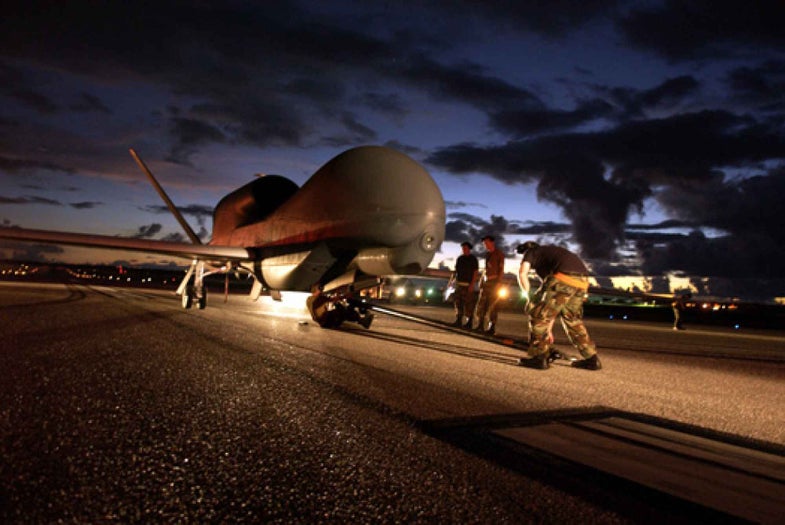 Sometimes, unmanned is a horrible name for drones. Large military remotely piloted vehicles, like the Global Hawk, are piloted by and attended by rotating shifts of crew. That adds up to a rather large labor force, especially given that Global Hawks can fly for up to 30 hours, and crew shifts are only 8 hours long. So to ease the burden on the pilots, the Air Force is making a big change: They’re letting enlisted pilots fly Global Hawks, and not just commissioned officers.

For years the Air Force has struggled to keep enough drone pilots. The work, often seen within the military as a career dead-end or at least a pause, requires long hours and is not without its psychological toll. Yet demand on drones for intelligence gathering and surveillance, from both the Commander in Chief and commanders in theater, remains high, so the Air Force has struggled to fly as many drone patrols as possible without exhausting its airmen. Earlier this week, the Air Force announced it would offer $125,000 to drone pilots that agreed to stay in service for five more years.

That will help keep existing pilots in. Opening up piloting positions to enlisted members will expand the total available pool of pilots for the Air Force to draw from. In their announcement, the Air Force said:

That’s a lot of Pentagonese. In essence, it means that Global Hawk surveillance is a big part of current missions (like the fight against ISIS), and that Air Force officials expect they’ll need to keep flying as many or more missions in the future.

In World War II, a small number of enlisted members of the United States Army Air Forces served as pilots, however that hasn’t been the case since the Air Force was spun off into its own branch in 1947. Starting in the 1960s, the Air Force only commissioned officers with college degrees to be pilots, usually ones who came up through training programs like the Air Force Reserve Officer Training Corps and Officer Training School. This helped the flow of pilots into the Air Force, which would find its manpower sorely taxed in the contested skies above Vietnam.

There was another innovation that in one move almost doubled the available fighter pilots. The Air Force’s main fighter in Vietnam was the F-4 Phantom, which featured a pilot in front and a navigator in the seat behind them. Initially, the Air Force required pilots in both seats (the Navy, which also flew the F-4, never had this requirement). In his history of the fighters of the era, C. R. Aderegg writes:

Just as in Vietnam, meeting the demands of a long war with existing manpower means changing the way things are done. With its decision to let enlisted airmen pilot unmanned vehicles, it looks like the Air Force is learning this lesson for at least the second time.