Can we make a flu vaccine that lasts for life?

The flu shots of the future could protect you for decades. 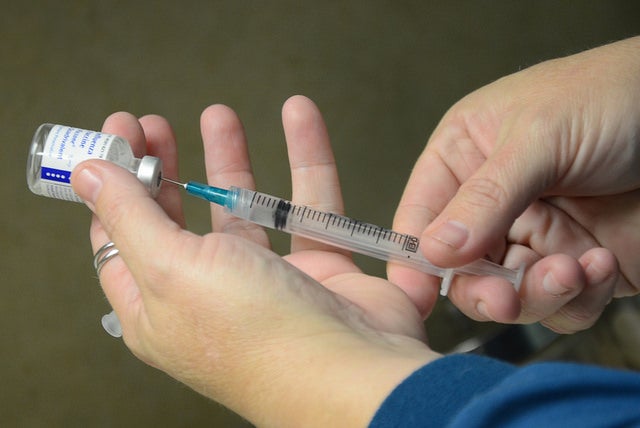 Getting your flu shot every single year is a real pain in the arm.

Sure, it helps protect you and everyone around you. The Centers for Disease Control estimate that flu vaccines prevented 5.1 million cases of the disease during the 2015 to 2016 flu season alone. But few of us actually look forward to the hassle of taking time from work or school to get poked by needles. Wouldn’t it be great if we could figure out how to make one vaccine that gave us lifelong protection against every strain of flu?

It turns out that scientists are actually working on flu vaccines that would stay potent year after year. “We’re aspiring to something that would get us out of the loop of annual vaccination,” says James Crowe, director of the Vanderbilt Vaccine Center at the Vanderbilt University Medical Center in Nashville, Tennessee. “Also, we’re aspiring to have something that would get not just one pandemic flu, but many or most of them.”

Here’s why the flu is so good at outwitting us, and how we’re fighting back.

Why do we need new a flu vaccine every year?

Influenza changes really quickly. It can build up a lot of little mutations from year to year, or change dramatically to cause worldwide mayhem like the 1918 influenza pandemic.

Flu viruses have a pretty unusual talent that lets them change radically. When two flu viruses infect the same unlucky person or animal, they can swap pieces of their genomes to create a completely new strain that didn’t exist before. “Most viruses don’t do that,” Crowe says. “They mutate, but they cannot mix and match their genes.”

Sometimes, the newly forged flu virus is so different from what our immune systems are used to dealing with that it can spawn a pandemic. This is especially likely if it contains pieces of flu viruses that were previously found only in animals. “That’s where you get these new bird flus that will jump over into the human population,” Crowe says.

Fortunately, this doesn’t happen often. But flu viruses don’t have to change that much to make us miserable. Influenza can collect small genetic mutations more quickly than most viruses. “Once you’re infected, the virus is constantly changing in you,” Crowe says.

That’s partly because flu viruses tend to make a lot of mistakes during replication. It’s not the whole story, though. A few viruses that cause chronic infections like HIV and hepatitis C also change dramatically after they enter your body. But other viruses don’t seem to profit much from their errors. “Measles virus actually has the same kind of lousy replication machinery,” says Peter Palese, a virologist at the Icahn School of Medicine at Mount Sinai in New York. “So why does flu change while measles does not?”

The answer has to do with how influenza distracts your immune system. Flu viruses are studded with a protein called hemagglutinin. It helps the virus attach to the cells in your airway and fuse with them. It’s also cloaked in tiny loops that catch the immune system’s attention.

“It’s like having a lightning pole. You sort of spend a lot of your immune reaction on these loops,” Crowe says. “The flu tricks you into focusing on areas that are not as important.” These loops can change endlessly, he says. And because they aren’t critical for the virus’s survival, they can mutate a lot without harming it.

All of this means flu viruses can change just enough that the immunity you had from your last vaccine will be a little bit off and won’t work so well anymore. “Those are minor changes, but they require us to refresh the vaccines every year,” Crowe says.

Can we do better?

Every year, we come up with a vaccine that protects against three or four flu viruses that researchers believe will be common in the coming season. This approach has a few downsides.

It’s not easy to get everyone vaccinated each year—and in fact, a lot of us are slacking. If 80 to 90 percent of the population got their flu shot, the virus would be thwarted by herd immunity. That means it would be less likely to spread to the elderly and other vulnerable groups. Unfortunately, we’re nowhere near those numbers.

Another problem is that it’s not easy to predict what kind of flu vaccines we’ll need each year. “We have to guess which flus are coming around before they’re actually around,” Crowe says. It then takes about six months for vaccine companies to manufacture their vaccines.

“They have to start in spring and rush, rush, rush to manufacture enough doses for the winter,” Crowe says. “And sometimes we’ve found out that the best guess that people made is wrong.”

Depending on how well the vaccine matches the viruses that circulate that season, the flu shot will protect about 10 to 60 percent of the people who receive it. And because the virus can change so drastically, a seasonal vaccine is unlikely to be very effective against a pandemic flu strain. That’s what happened with the H1N1 pandemic in 2009. “The new vaccine was basically much too late,” Palese says.

That’s why Palese and other researchers are trying to create a universal flu vaccine. Their goal is a flu shot that would protect against all strains for your lifetime, including the ones that could cause pandemics. “We do have something which works, and sometimes it works pretty well,” Palese says. “But we would like to have something better.”

Our current flu vaccines train the immune system to recognize the distinctive loops on the tip of hemagglutinin, the protein that helps the virus attach to your cells. But there are other pieces of the virus that don’t mutate as much, including the stem-shaped part of hemagglutinin tucked under the loops. A few years ago, scientists discovered that antibodies the immune system makes against these regions do stop influenza from replicating, Palese says.

He and his colleagues are developing vaccines that prompt your body to attack parts of the virus that aren’t constantly changing. “We are trying to redirect the immune system away from the decorative loops on the surface,” Palese says.

The first versions of their vaccines are currently being tested in people by GlaxoSmithKline and the Bill & Melinda Gates Foundation. Meanwhile, researchers in the United Kingdom are testing another flu vaccine that they hope will protect people for three or four years. And scientists at the Nebraska Center for Virology are taking a different approach to develop a universal flu vaccine.

“At some point in evolution, there was an ancestor, and all the influenza virus strains that are out there evolved from that ancestor,” team member Eric Weaver recently told Newsweek. The vaccine will use flu genes that mimic those found in ancestral viruses. “If we immunize against the ancestor, we can hopefully develop immune responses against all the different strains that evolved from that original strain.”

When can we expect a universal flu vaccine?

It’s going to take awhile to refine these vaccines and confirm that they are as safe as the flu shots we already use. “We’re still years away from a licensed vaccine,” Crowe says.

Eventually, Palese says, he’d like to develop a vaccine that you take in two doses several months apart, similarly to the measles-mumps-rubella vaccine or Gardasil, a vaccine against human papilloma virus. “We believe we can make a vaccine which would last a lifetime, or certainly much longer than what have right now,” he says.

Ideally, this vaccine would protect against all versions of the two groups of viruses that drive the annual flu season, influenza A and influenza B. Influenza B viruses are only found in people, which means that we might develop a vaccine that eradicates them. “We should be able to actually eliminate the virus from humans,” Palese says. “That won’t be so easy with Flu A.”

Influenza A viruses circulate in both birds and mammals and can sometimes cause pandemics. We can’t kill or vaccinate all the animals that might carry them, so these viruses will continue to persist and change. Still, Palese says, we might be able to develop a vaccine that offers decades or more of protection.

To make flu shots more effective, we’ll also need to learn more about how the body responds to them. We can’t currently predict which healthy people who get vaccinated will be shielded from infection, Crowe says. Next year, he and his team will vaccinate volunteers, then expose them to live flu viruses and observe their immune systems springing into action. “We’re going to be measuring immune responses initially minute to minute,” he says. “The idea is we measure everything possible and we see who is protected and not.”

Flu is a wily foe, and a bona fide universal flu vaccine is a ways off. “We may not be able to find a single vaccine idea that will solve all flus,” Crowe admits. But we can definitely do better. If nothing else, we will make flu shots that last longer and protect us from more strains or pandemic flus.

“Our worst-case outcome is just improving our seasonal vaccines and getting particular pandemic ones; we’re going to do that for sure,” Crowe says.

In the meantime, we can make it harder for flu to spread. We’re getting better at predicting how severe flu season will be and which strains to watch out for. And if you haven’t been jabbed yet this year, there’s no time like the present. “It’s not perfect, but it’s better than not having any vaccination,” Palese says.